Home / Railroad Stories: The Way It Was / Spreading my wings from SN Junction

My dream job on the Erie at this busy Ohio tower couldn’t last, as things turned out, but I’d succumbed to the romance of the high iron 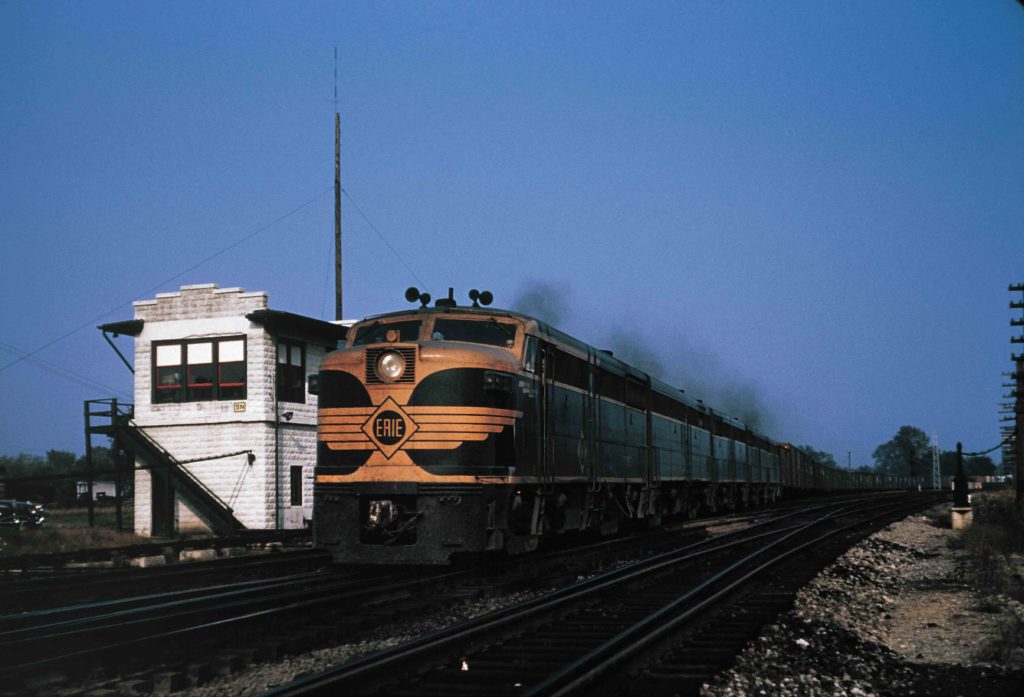 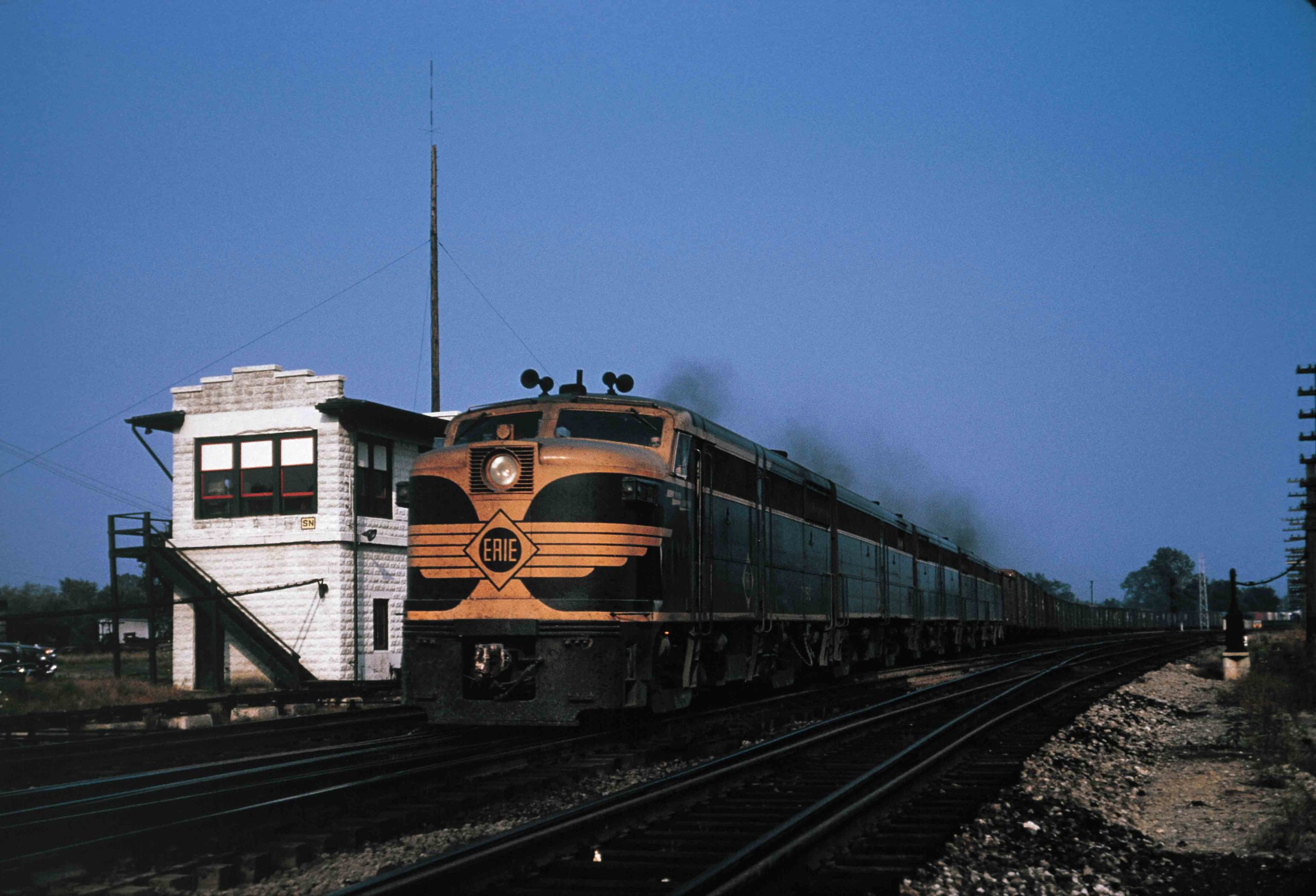 On a hot afternoon in August 1960, the year before the author began his Erie employment there, five Alco cab units thundered past SN Tower with a 99 freight.
J. David Ingles
In 1961 my dream came true. For the past six months or so I had been hanging out at various towers on the Erie Railroad’s Mahoning Division, especially SN Junction in Leavittsburg, Ohio, just west of my hometown of Warren. (The merger with the Lackawanna had just taken place, and things had not yet  changed much on that part of the former Erie.)

I was a student at John Carroll University at the time, but my fondest hope was to hold a summer job as an operator. That day finally came, when—through the auspices of a friend—I was hired by the chief in Youngstown as a new telegrapher. I eagerly looked forward to a railroad career and to hell with college (to my parents’ dismay). Armed with a trip pass, I was walking on air when I boarded No. 8, the Atlantic Express, the following morning in Warren to go Meadville, Pa., for a series of pre-employment tests. I returned that afternoon on No. 7, smug in the knowledge that I was on my way to becoming a real operator in the tradition of rail fiction hero Eddie Sand.

For obvious reasons, SN was my first assignment. One of about six interlockings on the Mahoning Division, SN was also the busiest. It controlled the crossing of the First District (Transfer, Pa., to Cleveland via Youngstown and Warren) with the Second District (Kent, Ohio, to Meadville via Courtland, Ohio) with a mechanical 47-lever interlocking plant (including two double slips). It was also home to an old Union Switch & Signal CTC machine that controlled the 35 miles of single track between SN and Transfer usually referred to as the “Cutoff,” which bypassed the congested steel-related industrial areas of Warren and Youngstown.

A dozen passenger trains a day rolled over SN’s double slips: three each way between Youngstown and Cleveland and another three each way on the main line between Chicago and New Jersey. To that, add a daily eastbound freight diet of at least two 100’s, four or five 98’s, two or three 74’s—all hotshots, along with 178, 192, 162, 78, and coal and ore trains out of Cleveland for Youngstown. The westbound line-up was a little lighter, but it included three or four 99’s, 77, 187, 161, 177, and usually several “ordinaries”—Erie lingo for westbound “dead freights,” mostly empties headed back toward western connections.

And of course, we could always count on a couple of empty hopper trains to Cleveland. On top of this were the yard engines, the Courtland run, the Warren run, the Kent wayfreight—more than I can remember—wanting time on the main here, crossing over there. This was industrial America, and Warren and Youngstown were in the middle of it all.

By any definition, SN was busy. The only thing it lacked was train orders, which were used only when reversing a passenger train around a freight (“single-lining,” as the Erie called it). Still, there was an order board—a red tin for 31’s and a yellow one for 19’s, enhanced at night by a red or yellow kerosene lantern. This was a fairly common arrangement on Eastern railroads on their multiple-track sections where traditional semaphore or color-light train-order signals were rare. A pad of 19’s and Form A’s were always at hand along with order hoops, just in case.

I broke in on third trick. The first train was Cleveland-Youngstown 686,  the remnant of the Evening Steel King, which once went all the way to Pittsburgh. Then 161 showed up. This was a Cleveland-Kent freight, double-caboosed, which ran around his train in the siding and then headed west. There was, on most nights, an ore train out of Cleveland, always in the charge of the six-axle Baldwin road-switchers that had directly replaced the R-class 2-10-2’s.

A little after midnight, No. 1, the Erie Limited, hit the bell on its nightly voyage to Chicago. Then the 74’s started to show. These were Erie’s hotshots—along with the 100’s and the 98’s. There were at least three and sometimes four, and they bypassed Warren and Youngstown via the Second District. This kept you busy at the CTC machine, as there was a much-used passing siding midway at Johnsons, and you also controlled the junction with the First District at Pymatuning. Of course, there were always those pesky yard jobs and switch runs to hound you, too.

A couple of westbounds were always in the picture—a 77 perhaps, and an 89 or an ordinary. On the First District, 187 popped up. This was a Meadville-Cleveland train called the “Moocher” because he set out and picked up cars everywhere. A returning empty hopper train was a certainty, the dispatcher hoping he could make North Randall ahead of 629, the early-morning Youngstown-Cleveland plug local whose Alco RS3 and five coaches clattered by SN about 6:30 or so. A little before transfer time, No. 8 hit the bell, and by then the first- trick man was climbing the stairs.

This routine went on for five nights. I was then pronounced fit and qualified to work SN, and I was ready to learn the rest of the jobs. This was one heck of a lot more exciting than academia.

But then disaster struck: I was medically disqualified. I was nearsighted, and the Erie did not hire operators who wore glasses. Needless to say, I was destroyed. Oh, I tried to get it reversed, but to no avail. My Erie Railroad career was over. I tried the others in the area—PRR, NYC, B&O—but no one else was hiring, and I spent the summer unemployed and broken-hearted.

But I was determined. I had succumbed to the romance of the high iron, and the following year I got a job as a towerman on the Rock Island in Chicago. I did get my degree and worked summers as an operator on the Nickel Plate and Pennsy, and eventually went into the NYC’s Management Training program. Since my Erie days, I’ve also earned paychecks signed by Amtrak, Illinois Central, Southern Pacific, and now BNSF—my last stop on a railroad career that seemed moribund in 1961.

SN, and the Erie, no longer exist. The track at SN has been gone for years, a victim of not only Conrail, but also the demise of the industrial heartland. When my father passed away several years ago, I drove by to see if anything remained, but there was nothing left but a foundation, not even enough to rekindle memories of that wonderful week now 41 summers ago.