Home / Railroad Stories: The Way It Was / Railfan Stories / Who was Miss Hazen? 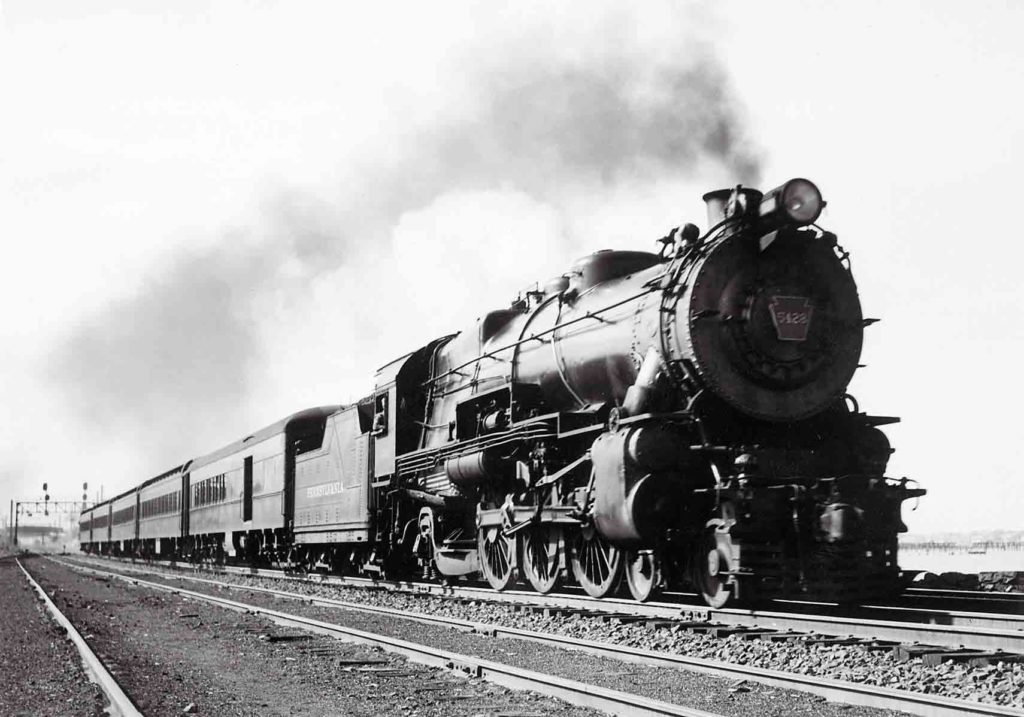 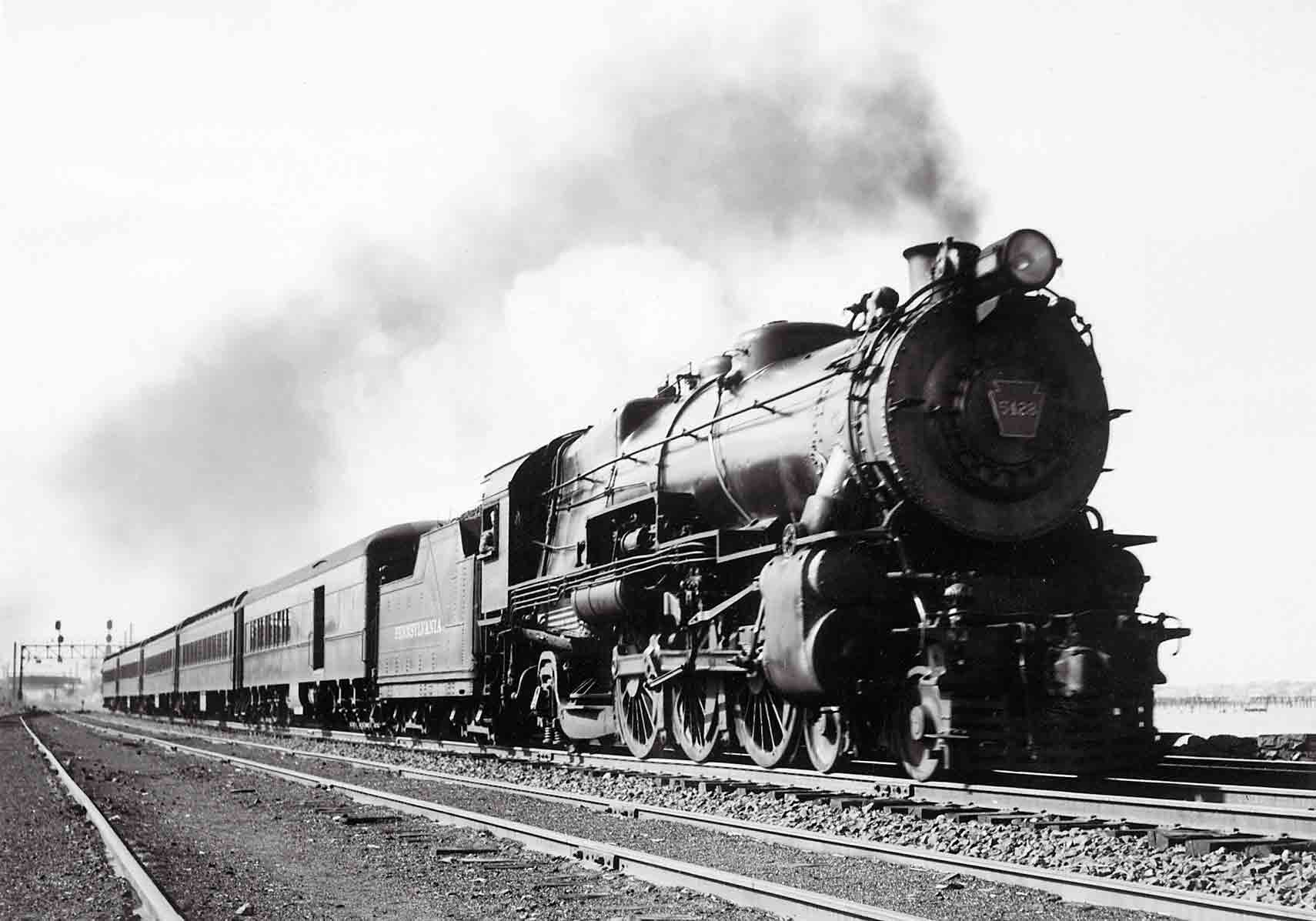 Looking not unlike Miss Hazen’s train 719, an unidentified Bay Head local rockets out of South Amboy behind Pennsy K4 5428 circa 1940.
Frank Quin
Life can be funny sometimes. The first railroad tracks I ever saw were those of the New York & Long Branch at Manasquan, N.J., in the mid-1930’s. But I don’t think I ever read an NY&LB timetable until a year or so ago, when I picked one up at an antique mall in, of all places, Dexter, Mo. The Long Branch didn’t issue public timetables because it didn’t operate any trains. It simply rented its right of way to the Pennsylvania and Jersey Central, which used NY&LB trackage to reach the Jersey seashore. While occupying NY&LB trackage, train crews abided by the NY&LB employee timetable and rules, which is what I stumbled across in Dexter. The title on my copy reads “Timetable No. 310, in effect Sunday, September 29, 1940.”

How a 60-year-old NY&LB timetable wound up on a flea-market table 1000 miles west of its home territory in a town served by the Frisco and the Missouri Pacific is a mystery. But when I opened the timetable I found a bigger mystery. The conductor who had once owned it had penciled in a small but critical alteration in the schedule for PRR No. 719, a passenger train operating five days a week from New York’s Penn Station to Bay head Junction, N.J.

In the schedule as printed, 719 left New York at 1:10 p.m. and made several scheduled stops, including my family’s summertime seashore hangout, Manasquan, before finishing its run at Bay Head Junction at 3:07 p.m. The station just north of Manasquan, Sea Girt, was not listed as a scheduled stop, probably because its population was tiny and relatively immobile. The Sea Girt stop was little more than a platform serving Camp Sea Girt, a sleepy U.S. Army post boasting a rifle range, a skeletal staff, and not much else. The NY&LB timetable shows No. 719 passing Sea Girt at 2:58 p.m., but the time figure is not prefaced by a boldfaced upper-case S indicating a mandatory station stop.

In my copy of Timetable No. 310, however, the anonymous employee has penciled in a large S and gone over it several times to make it bolder. And at the bottom of the schedule he wrote:

Reading those words launched me at once on a roller-coaster ride of speculation.

Who was Miss Hazen, and why did train 719 begin making a special stop just to drop her off at Camp Sea Girt?

And why the secrecy? The penciled notation and the underlined admonition “Not [to] be advertised” suggest that the owner of the timetable—almost certainly a crewmember on 719—was under oral instructions to begin making a Sea Girt stop. Apparently no General Order was posted in the yard office. That in itself would be highly unusual.

In the days before dispatching by radio, railroads reposed virtually total trust in the written word, from the Uniform Code of Operating rules to the telegraphed-and-typed train order to the crewmembers’ timeslips. Most railroad officials would have endorsed Sam Goldwyn’s reputed admonition that “An oral agreement isn’t worth the paper it’s written on.” Yet the NY&LB altered a train schedule for the benefit of one passenger and apparently never wrote it down anywhere.

My first effort to explain the hush-hush surrounding Miss Hazen was a naughty one: She must have been the commandant’s mistress. But I quickly discarded that notion. Girlfriends come and go around dusk, not in broad daylight. And personal secrets are hard to keep on an Army post, especially one as small as Camp Sea Girt. No, any hanky-panky would have been reserved for weekends in one of the hotels at nearby Asbury Park or Atlantic City, long favored for assignations.

So what exactly was she doing there? With no other clues to be found in the timetable, only the date and place suggest a scenario. The time was early 1941. Europe was at war, England holding out alone after the Nazi occupation of France and invasions of Denmark and Norway. Legally, the United States was not yet in the war—that would not come until December 8 in the wake of the Japanese attack on Pearl Harbor. Diplomatically, however, President Franklin D. Roosevelt already had committed the U.S. to supporting Britain, by “lend-leasing” 50 old World War I destroyers to the Royal Navy for U-boat patrols and sending over foods, medicines, clothing, arms, and ammunition.

Such were the times. What about the place? The Jersey shore in 1941 was a major locus of military preparedness. Even with no formal declaration of war, the U.S. Navy was gearing up for the struggle everyone knew was coming. Volunteer civilian spotters roved the beaches with binoculars, watching for U-boats. At the U.S. Naval Air Station at nearby Lakehurst, dirigibles rose into the sky and headed east, their crews looking for the tell-tale cigar-shaped hulls under the surface by day and for the tiny wake of a U-boat come to the surface at night to recharge its batteries.

Every Boy Scout on the Jersey shore nursed the fantasy that his patrol would be the first to spot a rubber dinghy ferrying Nazi saboteurs from a surfaced U-boat to the beach—perhaps infiltrating the Signal Corps school at Fort Monmouth, perhaps slipping into Lakehurst and destroying a dirigible, perhaps even working their way up to New York Harbor and wreaking havoc with shipping or blowing up the War Department Military Supply Command terminal at Bayonne, N.J., or the nearby Naval Weapons Station at Earle.

Maybe Miss Hazen was part of that. Might she have been a cryptographer, listening for Nazi radio signals and trying to decipher their codes? Maybe she understood German and came in five days a week to translate intercepted transmissions. Maybe she was a teacher, training Army recruits to do some of those things.

We can’t say, because we know so little. Despite the employee’s written instructions to stop No. 719 and let Miss Hazen off at Sea Girt, we don’t know where she boarded the train. Most likely she got on at one of the scheduled stops, which would not have required any special instructions to the crew.

Nor do we know when she returned. Any instructions to stop a northbound train to take her home must have been written in a timetable belonging to different employee assigned to a different train (there were 32 weekday round trips in 1941). Whoever worked the northbound train that carried Miss Hazen home apparently did not dispose of his timetable in Dexter, Mo.

Attention, memorabilia collectors: Does anybody have any New York & Long Branch material from the early war years? Have you ever run across the name Miss Hazen? And what about you military buffs? Does anybody know what exactly was going on at Camp Sea Girt in February 1941? On February 2, Sea Girt wasn’t even a flagstop. A day later it was a scheduled, albeit secret, stop. After 60 years, it’s time America knew the truth.