Home / Railroad Stories: The Way It Was / Railfan Stories / Travel could not be more pleasurable

A 1947 ride on the North Coast Limited was truly flawless 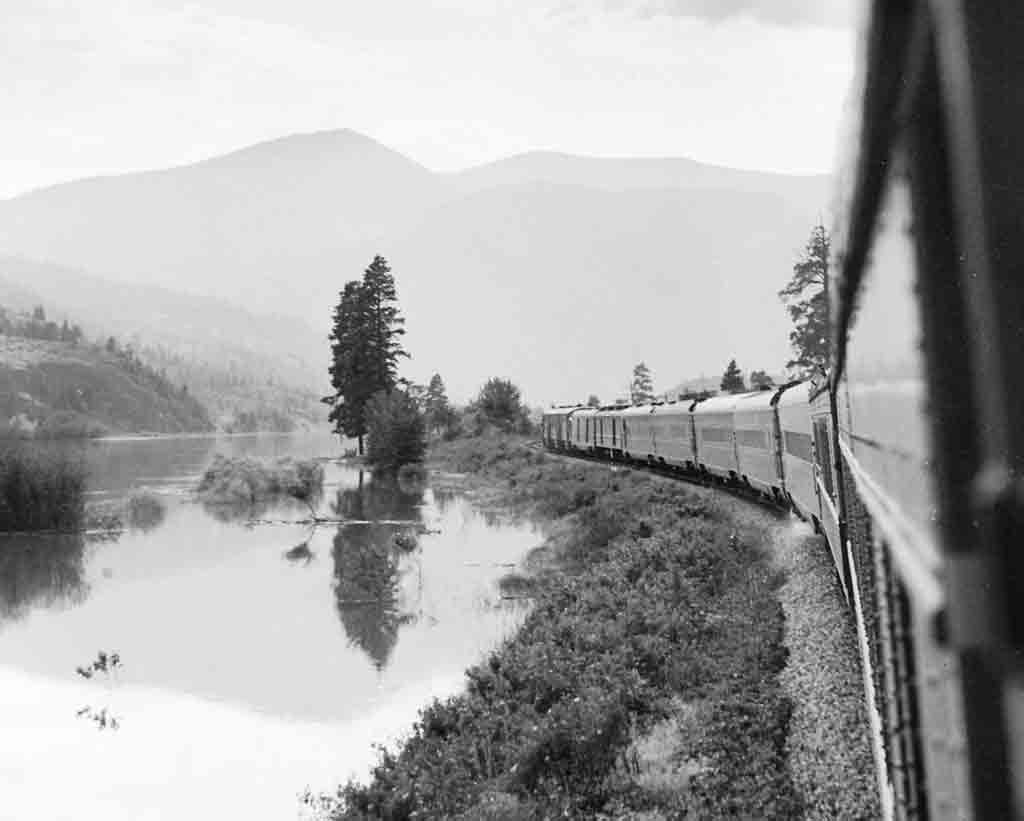 Great train, great scenery: NP’s North Coast Limited rolls west along the Clark Fork River in Montana.
Classic Trains coll.
My 1947 journey on Northern Pacific’s North Coast Limited is a treasured memory. I had come to love good trains through numerous trips between Washington, D.C., and my childhood home in Florida. My first ride on the Silver Meteor was in November 1941, and each trip on that train, with its new diesels and chair cars, and the “courteous service” long advertised by the Seaboard, furthered my dedication to rail travel.

In June 1947 I was among 225 graduates of Western High School in Washington. In August, my stepfather needed to visit several offices connected with his work at the Bureau of Public Roads, and he and my mother decided the trip would make a graduation present beyond my power to imagine. Dad planned the details, incorporating enough of his annual leave days to allow for sightseeing in Yellowstone National Park and the Grand Canyon.

Although the North Coast Limited recently had been assigned diesel power, it was still operating on its old three nights schedule between Chicago and Seattle. Its sleepers were still standard and tourist heavyweight Pullmans, although new coaches, listed as “Day Nite Cars” because of the seats’ full-length leg rests, were in the consist. Our section in the sleeper gave us welcome relief from a wait of several hours in Chicago Union Station, which then did not have air-conditioning.

Our Pennsylvania Railroad train from Washington had arrived at 3:40 p.m., and the North Coast was due out at 11 o’clock. It left about an hour late, and remained so until St. Paul the next morning. Once on the NP, however, its diesels made quick work of getting back on schedule. I can still see the fields of golden grain flashing past our window, and the well-maintained track disappearing rapidly behind us as I gazed across the rear vestibule.

Our sleeper was at the rear of the train, no doubt because it was detached at Billings early the following morning and forwarded 114 miles by NP and Burlington Route to Cody, Wyo., arriving there at 11 a.m. From Cody, we made the typical park tour on those quaint buses still seen on postcards, and spent nights in two of the great inns. On the third evening, we boarded NP train 213 at Gardiner, Mont., at the north edge of the Yellowstone, which left at 7:45 for a two-hour run to Livingston. There, we had a good, if short, rest, at a nearby hotel until the on-time departure of the North Coast at 3:01 a.m.

Next, for me, came pure enchantment. Yellowstone had been full of wonders, of course, but the Rockies looming in the distance as seen from the train window was the ultimate. Seated in the lounge, now at the rear with its door opening upon a brass-railed observation platform, we found ourselves amid a cordial and contented group of travelers. A doctor and his wife, visiting from Sweden, taught me some expressions in their language.

Onward from Logan, however, the train commanded all my attention, for at that junction where the lines to Butte and Helena diverge, a steam engine was coupled onto our sleeper-lounge to serve as pusher up Homestake Pass. Soon, the flagman pointed out the highest point on NP’s route, and called our attention to the city of Butte, still miles away but visible nearly 2,000 feet below us. When the train made its stop at Butte, from 12:15 to 12:25, we were enjoying another of NP’s excellent dining-car meals.

Later I decided to explore the train. By now the route was along the river known as the Clark Fork, and the craggy mountains were sprinkled with evergreens. From my first ride in a postwar chair car with leg rests, I concluded that travel could not possibly be more pleasurable than this: a historic route, incomparably lovely scenery, the tranquility and security of a fine train, and the soothing rhythm of steel wheels on jointed rails.

For me, NP’s 1947 North Coast Limited provided a journey without a single flaw.