Home / Railroad Stories: The Way It Was / Railfan Stories / To Chicago with Dad 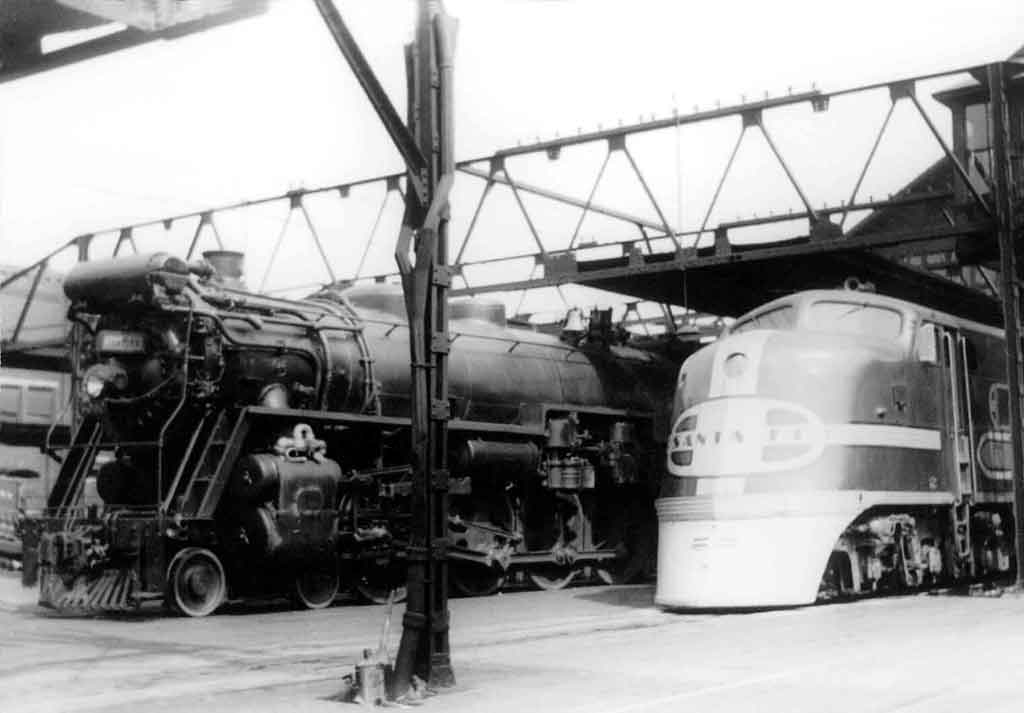 Grand Trunk Western 4-8-2 No. 6040 on the Maple Leaf stands beside Santa Fe E1 diesel No. 2 on the Kansas Cityan at Chicago’s Dearborn Station.
Frank M. Rogers
I think I was a railfan by the time I was 5 years old. My father had been a fireman on the Milwaukee Road since he was old enough (a little earlier, as a matter of fact; he’d lied about his age to get the job). Before him, his father had hired out in Janesville, Wis., in the 1890s and was promoted to engineer in 1901.

All through my childhood, railroad talk flowed around me, and on Dad’s off days he would often take me with him to the roundhouse in Madison to see what his position on the reserve list might offer him. Or he might take me with him to see Grandpa off on No. 11, the Sioux, on the nights when he had that run. Once in a while, we would get to ride on the engine, a class F3 4-6-2, as Grandpa took it around from the ready track to the siding next to the depot. There he’d wait for the Sioux’s arrival from Chicago, the removal of the Chicago-to-Madison engine, and the coupling of the fresh power—Grandpa’s engine—for the run across southwest Wisconsin to Marquette, Iowa.

Then, in the late 1930s, Dad got the idea that we would both enjoy a day together in Chicago (talk about “quality time!”). I think the tradition began when we would go to the American Flyer plant on Halsted Street, where we could buy more cars for the tinplate layout he and I had going in our basement. And, of course, with all those stations in downtown Chicago, another tradition got started: train-watching.

Many of my contemporaries got their kicks by attending or taking part in high school and college athletic or social events. My time was spent in our basement, working on either the tinplate layout or, later, an O-gauge empire. And the absolute culmination of each year’s activities was the trip to Chicago with Dad.

At least once a year, often the first Thursday or Friday in November (when a teachers’ meeting closed the schools and gave me the day off), Dad and I would board the eastbound Sioux, sometimes as early as 4:30 a.m., and spend the day in the Windy City. Sometimes we’d visit Grand Central Station to look for Baltimore & Ohio and Soo Line locomotives. Dearborn Station was home to the Santa Fe, Grand Trunk Western, and others. At La Salle Street Station, we’d find New York Central and Rock Island power.

In one of those early years, probably 1939 or ’40, we discovered that we could take a Rock Island suburban train out of La Salle Street and ride 6.6 miles south to Englewood Union Station. The NYC, Rock Island, and Pennsylvania shared the depot, and it seemed there was almost always a train arriving or departing.

The Rock Island and NYC tracks were side by side from the time they left La Salle Street until they parted at Englewood. There the RI continued south and west, while the NYC curved eastward, alongside the depot, to be joined, now side by side, with the Pennsy (which had crossed the Rock Island at grade as it entered the depot). It was from this spot east into Indiana where NYC’s 20th Century Limited and PRR’s Broadway Limited put on their daily race toward New York City.

I can still see the Century and the Broadway as the conductors gave their highballs and the hoggers pulled out the throttles. The engines, a J-3 Hudson on the Central, a K4 Pacific on the Pennsy, would respond like thoroughbreds leaving the starting gate, bells clanging and exhausts barking. In later years, we saw the K4’s replaced by T1 4-4-4-4’s with their streamlined prows, and the Hudsons by S-1 4-8-4’s with big “elephant ear” smoke deflectors. After that came the diesels.

If things slowed down at the east end of Englewood, there was always the Rock Island, whose suburban trains, with trim 4-6-2’s, would stop briefly before rushing off again. Plus, the Golden State made a stop here on its dash off to the Southwest, usually with a big 4-8-4 in charge.

And that wasn’t all. Sometimes we’d ride out to Hyde Park on the Illinois Central’s electric M.U. cars, to visit the Museum of Science & Industry and its “Museum & Santa Fe” model layout. On the way we’d pass the IC roundhouse at 27th Street, where, with luck we’d see a Chesapeake & Ohio 2-8-2 idling. (We never did find out what it was doing there—something about joint trackage, I suppose.)

The trip home was usually made on a mid-afternoon train out of Chicago, though sometimes it was early evening. An occasional bonus would be a ride on a Chicago–Milwaukee train with a 75-minute schedule (for the 85 miles) and an arrival 5 minutes early, then another, slower train to Madison. Both of us usually spent some of the time napping, thanks to all the fresh air and walking we’d done during the day.

The next few days after our trips I usually spent down on the O-gauge layout, trying to duplicate some of the things I’d seen, and telling my fellow teenage railfan, Bob Reppert, about Chicago.

The sights and sounds of those trips with Dad will live with me forever. I mourn their passing as I would a dear old friend.