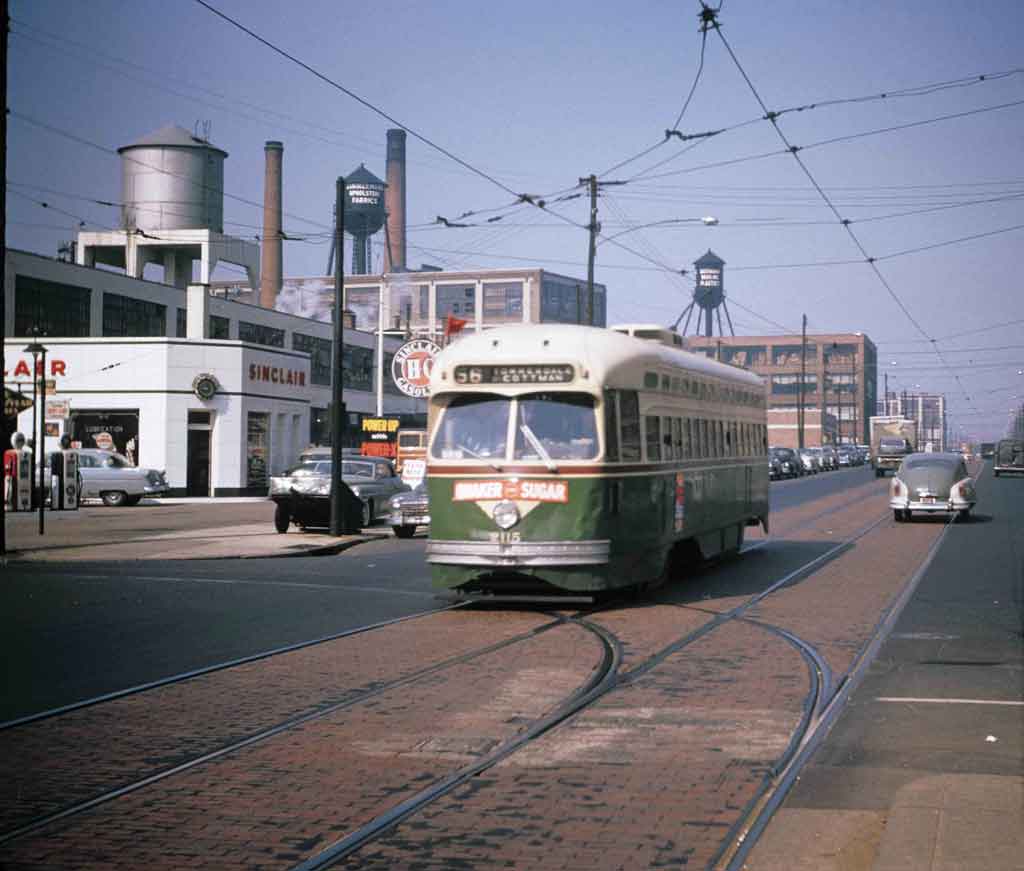 Philadelphia Transportation Co. PCC car 2115 cruises east on a Route 56 run along Erie Avenue in 1955.
Mert Leet
My dad worked as a trolley operator for the Philadelphia Transportation Company. Stationed at the 10th and Luzerne carbarn, he was one of a legion of veterans who found work on the PTC after World War II. Luzerne was the hub of PTC’s north-south routes, and the largest trolley shed in the world. Although streamlined PCC cars were arriving in droves in the decade after the war, the company still operated a large number of classic Brill cars.

The PTC’s brass hats frowned on free rides for families of trolley crews, except on Sundays. So, many dads who worked on the Sabbath let sons and daughters ride along with them. As soon as I was old enough, I joined the exclusive group of “Sunday Sons.” Since Pop worked most Sundays, I got to log quite a few miles with him.

Though he might be called to work any route, Dad was usually assigned to Route 20, one of the longer north-south lines. Starting at the Broad and Olney station, it followed Old York Road, then 12th Street, through Center City and South Philly and on to the Philadelphia Naval Base. In the mid-1950s, PTC’s aging fleet of Brill Nearside cars worked this route during the week, with modernized 8000’s on the weekends. Riding in one of these was an adventure for a Sunday Son, especially on Route 20. Between Packer Avenue and the Navy Yard was a stretch of private right-of-way over a marshy flat. The contours of the ground and the track had a way of shifting from day to day. Thus one was treated to a Toonerville Trolley-like ride. The cars bucked and swayed enough to curdle milk!

Every time we entered the flat, I’d grab on. Imagine being age 6 or 7 in an empty trolley on a wooden seat, being tossed around like a rag doll. Often I thought we’d be thrown off the rails, careening out of control to a fiery doom! Dad assured me derailments on the flat never happened—well, hardly ever. We always got through unscathed, but there was one run when I thought we’d bought it. With a couple of fares with us, we were buffeting along, when suddenly—blammety-blammety-blam!—all hell broke loose. It sounded as if the old Nearside was about to go into splinters!

After what seemed like an eternity, the cacophony stopped and the car screeched to a halt, with me on the floor, and two unnerved riders with their eyes as big as saucers. Dad calmly smiled, and said, “It’s just the pole, folks.” It had become disengaged from the overhead wire and was being whiplashed by the span wires—a not-unusual occurrence, and easily remedied.

There was also the time Dad had a trainee motorman under his care. On this day, the young fellow was just an observer, watching Dad stand and work the old controls and crank open the manual doors. It was a warm spring day, and just before the end of the run there was a drenching thunderstorm.

At the carbarn Dad told the trainee he could throw the switch that would take the car into its berth. As the young man grabbed the switch iron and exited, Dad gave me a little wink, which I knew meant, “Just watch this!” From my seat, I could see only the top of the man’s head through the front windows. Then suddenly there arose a tsunami-like wall of water, drenching him. You can bet he learned about the characteristics of a trough-rail switch that day!

Of the many adventuresome moments I had as a Streetcar Sunday Son, none was more frightening than the one I shared with one of my compatriots and his dad. The motorman, whom I’ll call Pete for his protection, was working Route 56 this one Sunday. The route cut Philly in half on Erie Avenue, with the geographic center of the city at the corner of 6th Street. The thoroughfare was also probably the widest and most desolate in any metropolitan area. Between Front Street and Frankford Avenue, the area resembled a ghost town. On any Sunday in the ’50s, traffic lights on the two-mile stretch were put on flash.

Route 56 was the bastion of the PTC’s 2000-series early PCC cars. They were geared with some giddyup, and Pete showed Petey Jr. and me just how much! One Sunday, somewhere past Front Street on the eastbound run to Frankford Avenue, with no fares aboard, Pete looked back at us with a glint in his eye. “Boys, I’m gonna show you what one of these babies can do!” he said.

He stomped on the control pedal, and the acceleration threw us back in our seat. That PCC barreled down a deserted Erie Avenue at what seemed like 100 miles an hour! The trolley lurched and twisted as passing buildings became a blur. Two petrified 8-year-old boys hung on for dear life, certain we were headed toward a mangled pile-up down the line! We survived though, to pick up some passengers at Frankford Avenue for a more leisurely trip down Torresdale Avenue.

These routes, the Nearsides, and, alas, most of Philadelphia’s streetcars are no more. Though Dad found other work as the lines were phased out, I rode the cars with other operators well into my teens. Even Pete kept a promise by letting me operate a car after I got my driver’s license. Sure enough, Pete, by then assigned to the Germantown depot, put me in the driver’s seat of car 2800, PTC’s highest-numbered PCC. My “run” was all of 300 feet in the depot yard, but what the heck: I was living the fantasy of Streetcar Sunday Sons everywhere.