In changing from NYC’s Harlem Division to the New Haven, I learned the truth about no free lunch 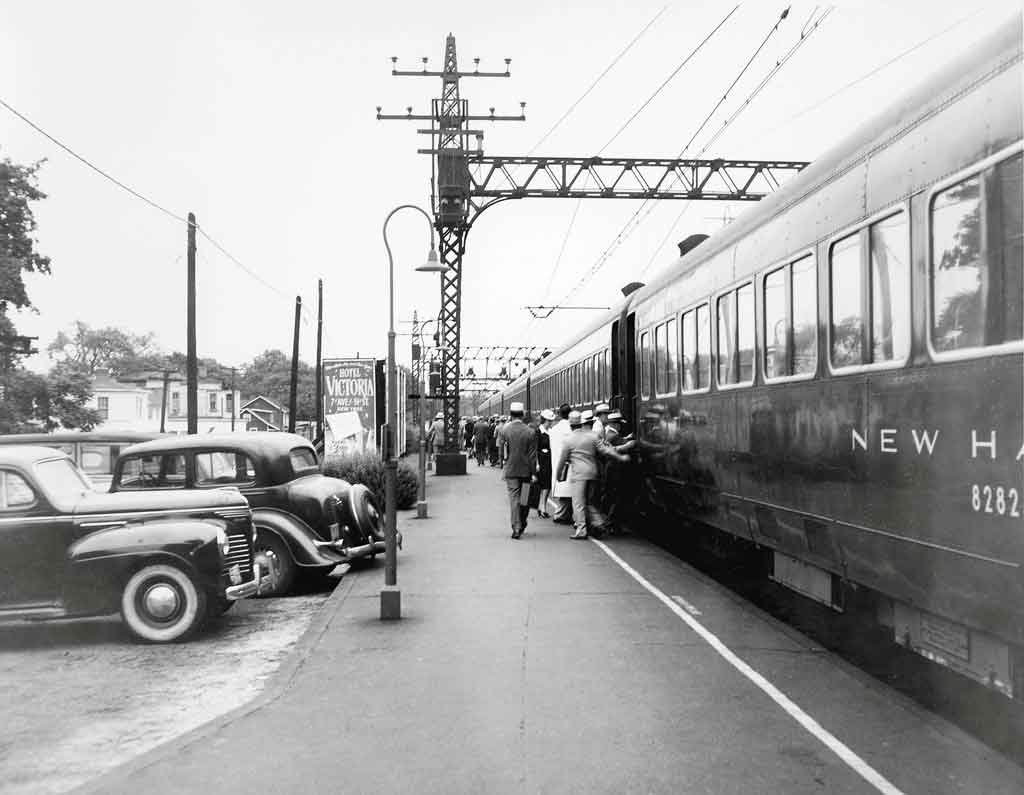 “Deluxe” cars like these on New Haven train 365 at Darien, Conn., in July 1947 were not what author Paradis experienced on his commuter-train rides.
NH
The distant rumble warned that the mighty New York Central steam locomotive with its 12 steel coaches would soon round the curve on the Harlem Division and bear down on the little Katonah (N.Y.) station. Next the gong summoned the gatekeeper from his little shanty to wind down the crossing gates just before the train roared toward the 50-some commuters standing impatiently on the platform. This was the 7:24 a.m. local-express, bound for Grand Central Terminal just 45 miles and 90 minutes down the pike.

With sparks flying from brakeshoes, mingled with the sweet ozone perfume, the train finally stopped, its engine way beyond the lumber yard. Two minutes later the conductor gave the familiar wave to the engineer, then woe to any village housewife who had neglected to rescue her laundry hanging on the line. Black smoke slowly engulfed nearby houses as the Pacific or Hudson began to bark and accelerate.

Barely able to get up to speed before having to cut throttle, every engineer commanding that power must’ve been frustrated, as the average distance between stations north of White Plains was only 3 miles. Furthermore, two stations sat on curves that limited an engine’s tractive power to 12 cars on the return trip up the Harlem valley. The time was November 1946, a year after World War II ended, and for years, each weekday morning this drama had been playing, the train gradually adding more cars as more people moved out to Westchester County from New York City.

After years of commuting by bus to the subway terminal and then often standing for the long trip into New York, I looked forward to what I thought would be more luxurious travel. I quickly found, however, that an hour and a half each way—sitting on a stiff mohair seat in a coach paneled with now dingy rosewood and having single window sashes that admitted frigid air in the winter and smoke in summer—was hardly the scene I had imagined.

Those old 88-passenger coaches had shuttled for years up and down the Harlem Division; their deteriorating frames and equipment somehow kept working but their condition was showing. Generators, for example, often were unable to satisfy night-lighting needs, with the result being semi-darkness. Southward, there was the need to shed steam at North White Plains, since it was unlawful to run steam locomotives in the Park Avenue tunnel. Thus occurred the necessary change to an electric locomotive, which added another 10 minutes to the already tedious stop-and-start trip.

For me the big daily thrill was watching that Hudson or Pacific (both types were utilized) charge into my station and stop at exactly the same location each time. Then one morning, the train rolled in as usual, but—surprise—without its usual steam engine. In its place was an odd-appearing road-switcher type diesel. It emitted little black smoke, and made no improvement in running time, but it saved cost for management and was here to stay.

Two years later, double sessions in the Katonah school dictated a change,  and we moved to Westport, Conn. Pat McGinnis had recently taken over the ailing New Haven Railroad, and his glib improvement promises validated my changing railroads . . . or so I thought.

What Pat got actually was mostly the rag-tag of a once-proud railroad that had been milked early in the century and never returned to its former glory. Trains were a mixture of ancient, old, and newer cars and engines. To bring some life into the New Haven, some of the equipment was repainted black and red. However, even that failed to keep McGinnis on the job for long, and then the railroad continued as it had.

At Woodlawn, where the New Haven diverged from the third-rail New York Central, the NH thereafter received its power from overhead catenary wires, a continual source of trouble and expense. Profitable freight had almost disappeared and would fade further after Interstate 95 (which paralleled the line) opened early in the ’60s. Autos had long grabbed most of the passengers.

Although the elapsed time of the Westport-New York express was 40 minutes less than that from Katonah (same mileage), I soon learned the truth about no free lunch. In planning our move, I had failed to project the need for a station car with the attendant parking problems that soon required me to rent a parking space. There were also insurance, tax, and license expenses. Fares were much higher than on the Central, so the commute proved much more expensive with little real time saved.

I found a seat in what was once a handsome club car, its individual seats now covered with faded fake leather. Looking down between my legs, I was horrified to see the ties flashing by below, sections of the floor having rusted away. Although next time I tried to find a seat in a more presentable coach, the thought of that rusting car traveling back and forth between New York and New Haven as part of our daily train was not comforting. On occasion, passengers were not reluctant to express their fears for all to hear as the train rocketed along a stretch of straight track. “Hope we make it today,” or “How long before we have a wreck?” were not uncommon expressions.

Still, to the everlasting credit of the men and women who maintained and operated that decrepit equipment, the NH never had a wreck that I knew of during the eight years I rode—just minor delays and breakdowns. Nevertheless, when our last child left for college, I studied all the timetables of divisions serving Grand Central and settled on the lower end of the old Harlem. Bronxville to New York was just 28 minutes non-stop.

We moved there for my final four years of commuting, and I enjoyed a cheaper fare, faster and more reliable trips, newer M.U. electric cars, and no need for a second automobile. At last the long-awaited retirement day arrived; a final trip to Bronxville, and a wife waiting to whisk us to Vermont.

In retrospect, the financially strapped railroads did a good job running a money-losing service they could not shed. Today, under the government entity Metro-North, more modern M.U. coaches, high-level platforms, and electrification of the Harlem Division as far north as Brewster, all ensure faster reliable service. Best of all, there are no more waits to change engines at North White Plains!