Home / Railroad Stories: The Way It Was / Railfan Stories / ‘Penny pictures’ of the Sandy River

Insights into a wandering Mogul and life on the two-footers 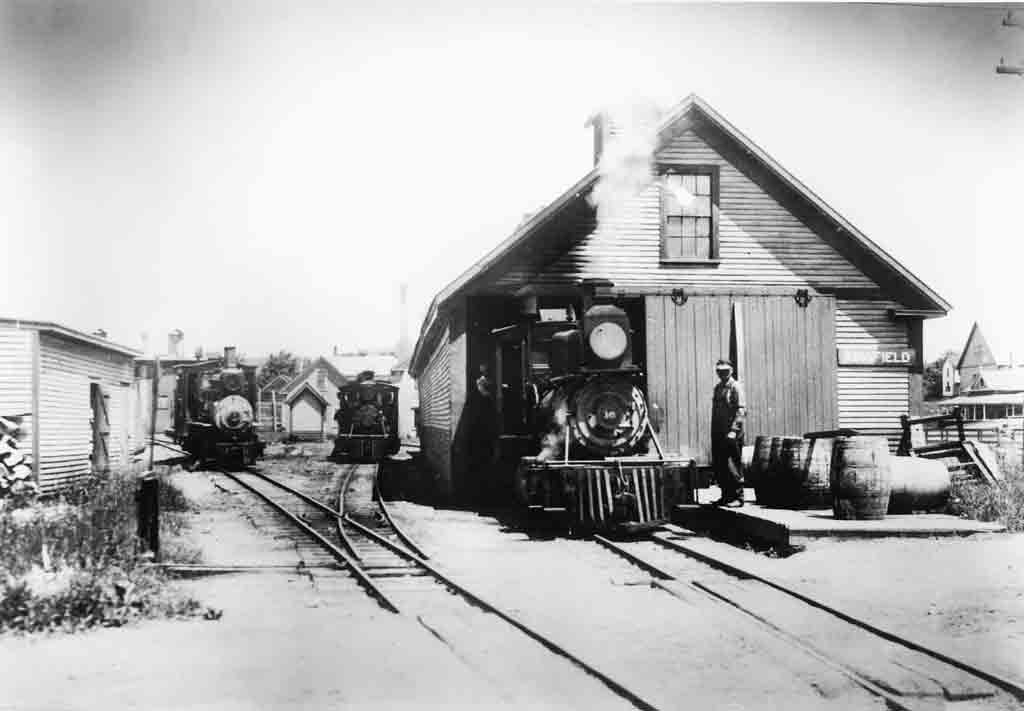 Sandy River & Rangeley Lakes 2-foot-gauge Mogul No. 16 pokes out of the covered depot at Kingfield, Maine.
Charlie French, Mallory Hope Ferrell coll.
While still a teenager in the early 1950s, I corresponded with a man who had grown up on the 2-foot-gauge lines of Maine. Arthur French, by then elderly, collected Indian Head pennies, but his father, the late Charlie French, had been an engineman on both the Franklin & Megantic and the Sandy River and had made, and saved, a number of photographs of these lines.

My “Granddad Willie,” who had a small grocery store in the “Old Towne” section of Portsmouth, Va., took in a number of Indian Head pennies in his trade and was happy to save them for me. I then traded the coins to Arthur French for prints of the “two-footers” in action.

All through my high-school years, I would send Arthur the pennies and he would make contact prints of the ancient scenes, mainly taken in and around the family’s hometown of Kingfield, Maine. Arthur did his own darkroom work, and while some of the small prints were not all that great photographically, others were outstanding.

The Franklin & Megantic had been built the 15 miles from Kingfield to a connection with the equally 2-foot-gauge Sandy River Railroad at Strong, Maine, in 1884. The F&M had its own feeder logging line, the Kingfield & Dead River. The K&DR had no equipment of its own, and the F&M had only two locomotives. After about 1893, an agreement was reached wherein the F&M and K&DR were operated essentially as a part of the Sandy River, with the larger road frequently supplying motive power and rolling stock. In 1908, all six of the area’s interconnected two-footers began operating under the name of Sandy River & Rangeley Lakes. These included the former Sandy River; Phillips & Rangeley; Madrid; Eustis; Franklin & Megantic; and Kingfield & Dead River.

One of the Maine engines that interested me was a 2-6-0 that had been built for a North Carolina 2-foot-gauge line, the Laurel River & Hot Springs. This pike, backed by a group of Boston real-estate promoters, was to run from a connection with the Western North Carolina Railroad (later part of the Southern Railway) at Hot Springs, N.C., up Tanyard Branch, through Gahagen Gap, and down Hurricane Creek to Laurel River and the mouth of Foster Creek, a distance of 24 miles. The line’s location was established for 8 miles, and survey stakes were put down for an additional 4 miles.

Contracts for construction of the LR&HS had been given to L. H. Wheaton by January 1893, but only about 3 miles were graded before the line was reported as “abandoned” in 1895. The Laurel River line, though, had purchased the new 2-6-0 and six flatcars, one of which was converted into an open excursion car, with seats and a canopy. The railroad planned to log-off the timber along its right of way and then sell the land.

The LR&HS locomotive, named for the line’s president, James Wyman of Lynn, Mass., was built by Baldwin (construction No. 12964) and shipped to North Carolina in October 1892, but it is doubtful she ever operated there. The Mogul, and the flats, were sold on February 3, 1897, to Albert Fogg, a wholesale commission agent, for $1,800. They were then resold to a used-equipment dealer, Thompson C. Gill & Co. of Philadelphia, who resold them to the new Wiscasset & Quebec Railroad. The cars and engine were shipped to Wiscasset, Maine, but the abuilding W&Q could not raise enough cash to pay for them. They were stored at the Portland Company, a locomotive and car builder in downtown Portland, Maine. The 2-foot-gauge W&Q was eventually constructed and operated for many years as the Wiscasset, Waterville & Farmington Railway.

Eventually, in February 1900, the LR&HS engine and six cars became the property of the Sandy River Railroad.

Upon arrival on the Sandy River, the 2-6-0 became its No. 3 but commonly was called the “Old Star” because of the five-pointed design on her front number plate. The locomotive spent a great deal of time on the Phillips & Rangeley, so much so that some crews referred to her as the “P&R Mogul.” She was also frequently used on the former Franklin & Megantic out of Kingfield, and Charlie French ran her on many occasions.

In 1905 the locomotive was briefly renumbered as Sandy River 7, but, soon after the 1908 Sandy River & Rangeley Lakes grouping, again changed identities and became SR&RL 16.

Kingfield was on a stub-end line and had a “covered depot” to protect passengers from the frigid Maine winters. In that season, the doors would be opened by the station agent just before arrival time so the cars could be spotted inside the warm building. Arthur French told of one agent who was always late in opening the doors, forcing the train crew to come to a complete stop and wait. On one occasion, the regular engineer on the passenger train decided to teach the agent a lesson—it was, after all, the agent’s responsibility to see that the station doors were opened and closed. The next time the engineer arrived with a train from Strong and found the doors closed, he opened them with the locomotive without even stopping. Carpenters were sent over to repair the mess. Following a talk in Phillips with the “Super,” F. M. Beal, both the engineer and the agent lost some pay but apparently kept their jobs.

In 1915, the “Old Star” was sent to the Maine Central’s shops, where she received a new boiler and an extended frame and returned as a 2-6-2 Prairie type. She served the Sandy River lines right up to the end of operations and was scrapped along with the railroad in fall 1935.

I’ve always loved my “penny pictures” from Arthur French, and while both he and the Sandy River have long since passed into history, the old photographs give us some insight into life on the Maine “two-footers.”