Home / Railroad Stories: The Way It Was / Railfan Stories / One man’s favorite locomotive 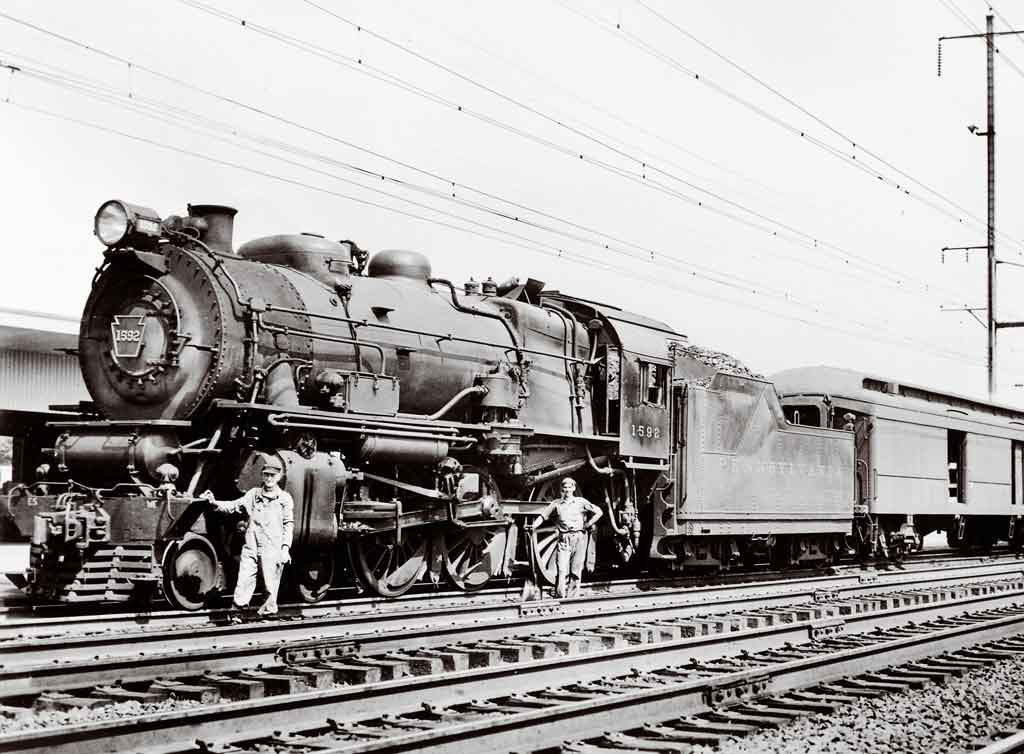 Engineer Norman Strickland (in front of cylinder) and fireman Russell Phillips stand at Perryville, Md., with G5s 1592, ready to depart with MD-58 for Philadelphia via the Octoraro Branch.
George Gillespie
Probably 90 percent of all railfans would say their favorite locomotive is the one on which they took their first cab ride. This is certainly true in my case.

We lived in Swarthmore, Pa., a Philadelphia suburb on the Pennsylvania Railroad’s electrified branch to Media, Wawa, and West Chester, on which we mostly saw Tuscan red M.U. commuter trains. But there was also one steam-powered run, which left Philadelphia’s Broad Street Station as train MD-59 in the morning and was usually pulled by G5s Ten-Wheeler 1592.

MD-59 consisted of the locomotive and just two cars, one B60 class baggage car for Railway Express and one PBM70 combination Railway Post Office-baggage-coach. On the West Chester branch, this train would stop only at stations with a Railway Express agent: Lansdowne, Morton, Swarthmore, and Media. From Wawa, MD-59 would head down the non-electrified Maryland Division Octoraro Branch, stopping at all stations en route to Perryville, Md., on the Philadelphia-Washington main line exchanging mail and express—but handling no passengers.

The train was scheduled to stop at Swarthmore around 8:10 a.m., which meant I could watch it on my way to junior high school. When it was late (which was often), I could see it whiz by from my first-period English class. From my seat, I would always try to identify the locomotive.

The real treat was the return trip to Philadelphia, MD-58, due at Swarthmore at 5:08 p.m. The local postal clerk, “Bus” Blundin, a true rail enthusiast who got me started train-watching, could be counted on to be there. Norman Strickland, the regular engineer, slim and short of stature, had the gracious smile we associate with all engineers. He loved the 1592 and preferred the 4-6-0 over the replacement E6s Atlantic or H9s Consolidation that would stand in when 1592 was not available.

Looking up at this wonderful, hissing locomotive with Mr. Strickland waving, I dreamed that someday I would be up there with him. Usually I tried to meet the train twice a week and converse with him from the platform. After about six months, he asked if I would like to climb up into the cab. You know that answer. What a thrill—my first cab visit! This became a regular procedure, since the Swarthmore stop usually lasted four or five minutes. It was disappointing when Mr. Strickland had the day off—no conversation or climbing up into the cab, I was just another kid looking at the locomotive.

The communicator whistle from the conductor would indicate when it was time for me to climb down from the cab to the platform and wave good-bye. On one early November day, however, while I was talking to the fireman, Russell Phillips, Mr. Strickland, upon hearing the conductor’s signal, immediately started pulling out! I ran to the gangway and hollered, Stop! Surprised and apparently forgetting I was still aboard, he replied, Jump!

Although I was somewhat athletic, it looked like a tremendous leap to me. We were moving, and the concrete platform didn’t look like it would make for a very soft landing. Mr. Strickland then said, “Sonny, I can’t stop now, so go sit down in Russell’s seat.” My first cab ride had begun.

As a passenger, you don’t realize how a steam locomotive actually zig-zags down the track. First there was a thrust from the right-side cylinder, then one from the left, and so on. We flew past the station at Morton, still picking up speed, and I’ll never forget the Primos grade crossing. You could see a small kink in the track there, which we hit at speed. Mr. Strickland looked straight ahead, never flinched or smiled, but I thought we were going to go flying to heaven or hell. Our first stop was Lansdowne, six miles from Swarthmore. That’s where I got off, one happy boy, thanking Mr. Strickland all the while as he pulled out for 30th Street Station.

Now I had a serious problem. I had only 15 cents on me, and the train fare to Swarthmore was a quarter. If I telephoned home to say I would be late for dinner, I would not have enough money to ride the Chester bus, which stopped a half block from our house. So I hung onto my 15 cents until the bus came by. My mother was worried, but all was forgiven when I related my great adventure. I couldn’t wait to tell my friend Bus, the postal clerk.

Thus did Pennsy G5s 1592 became my favorite locomotive. Over the years I am thankful my wife has never asked me to identify the happiest day of my life.