Home / Railroad Stories: The Way It Was / Railfan Stories / Helping the helper crews at Lamanda Park

In Pasadena, it was the best of times for a Santa Fe train-watcher 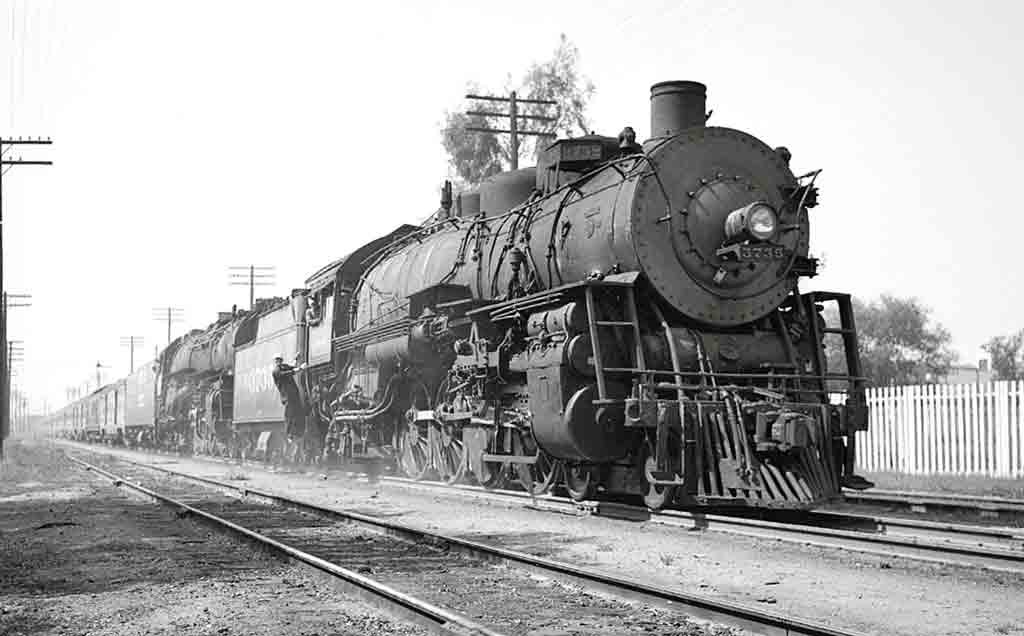 Santa Fe’s Chief approaches the Lamanda Park siding on May 17, 1946. The fireman on the helper is ready to jump off and uncouple his 4-8-2 so it can move into the clear and let 4-8-4 No. 2921 continue east with train 20.
Stan Kistler
In early 1946, my family moved into a small house near the corner of Craig and Walnut in the Lamanda Park section of Pasadena, Calif. This was an ideal location for me, a railfan even then, because the Santa Fe’s main line passed within a hundred yards of our front porch.

Soon after we moved in, I started to keep a daily log of the trains I saw. I was still in school and so missed many of the daytime trains except on weekends and holidays. Postwar passenger business on the Santa Fe was booming. On the Second District (of the Los Angeles Division) there were 11 scheduled daily passenger trains, 13 on the four days a week the Super Chief and El Capitan ran. Add to this second sections every day of the California Limited, Grand Canyon Limited, and Fast Mail, then add the deadhead and military moves to accommodate troops returning from the Pacific, and it was the best of times for a Santa Fe train-watcher.

Our house was also just a few blocks west of the Pacific Electric Sierra Madre interurban line that crossed the Santa Fe at Sierra Madre Boulevard. The PE had an interlocking tower there, manned around the clock, with Santa Fe paying 50 percent of the costs. The tower controlled distant and home signals and derails on both railroads, as well as the west switch to Santa Fe’s Lamanda Park siding. The Lamanda Park station was three blocks farther east of the tower, where San Gabriel Boulevard and Walnut Street joined.

Lamanda Park got to be a busy place in late afternoon and early evening. The Second District local freight from San Bernardino often showed up around 4 or 5 p.m., and more often than not did some switching. A little later, the eastward “pickup” from Los Angeles, usually with a 3129-class 2-8-2, came in and switched the packing house, taking the loads of citrus on to San Bernardino. Then, about 7:30 p.m., First 4, the eastbound California Limited sleeper section, arrived, doubleheaded with a 4-8-4 road engine and a point helper that was anything the Los Angeles roundhouse could scrape up, from a lowly 1950-class 2-8-0 to a 3700-class 4-8-2. The helper’s fireman would usually be on the bottom rung of the cab ladder, ready to jump off to uncouple the helper and line the siding switch the instant the train came to a stop. Once the helper cut off, the road engineer would whistle for an air test, and by the time the helper was in the clear and the siding switch was lined back, he had gotten his highball from the rear flagman, given two long blasts on the whistle, and was starting to notch out the throttle.

It was downgrade eastbound from here to Monrovia with a 100-mph speed limit except for a couple of 65-mph curves through Arcadia and Monrovia, and it was really a thrill to watch and listen to those magnificent 4-8-4s accelerate from a dead stop with one of the “old head” passenger engineers like Frank Gillette, Clem Hennessy, or Steve Hiler in charge. Gillette was one of those engineers who loved his job, and it was evident in the way he ran his locomotives. He was also a “whistle artist,” and there were nights I can remember hearing him blow for all the crossings between Lamanda Park and on through Arcadia, running as fast as he was allowed, that beautiful Santa Fe six-chime whistle melodiously wafting back in the night air.

Second 4 was usually right on First 4’s block, and the same helper cut-off ritual was repeated at Lamanda Park. The two helpers stayed in the siding and waited to run light back to Los Angeles after No. 2’s helper joined them about an hour later. It was here during these evenings that I made friends with the helper crews. With an hour or more to wait, they would gather under a tree and swap railroad yarns. On occasion, local residents would drive up and stop, and I remember one woman in particular who offered the men some coffee from a Thermos each time she came by.

Often an engineer would invite me up into the cab, where the smells of lubricating oil and steam mixed with the vibration of air pumps, and sounds of the spot fire burbling in the firebox would come together with the visual images of gauge lights and the flicker of the fire reflected on the tender sandbox as it escaped from the peephole in the firebox door. Believe me, this 15-year-old took it all in with relish.

One night, when I was up in the cab with engineer Howard Bryant and his fireman on a 3700-class 4-8-2, a westbound passenger train was approaching. Bryant told me that this would be First 7, the Fast Mail, running about an hour late. Then he said, “I want you to get up here in my seat and grab the whistle cord. When he goes by us, he’ll whistle a long and two shorts, and when he does, you yank that whistle cord two short toots as hard as you can.” I did exactly as I was told as the big 4-8-4 and its mail and express train slammed by. Bryant gave me a “well done,” and explained that what I had done was to acknowledge that First 7 was carrying green flags, indicating that a second section was following. That night was the start of a friendship with Bryant that would last for more than 40 years.

Just before 9 p.m., train 2, the Scout, would arrive, and again the move to cut off the helper was repeated. Since Lamanda Park was not an open office at night, No. 2’s helper crew would pick up train orders at Pasadena for the return to Los Angeles for all three engines, coupled together. Since there was no way to turn the locomotives here, they backed all the way. Once in a while, the size of First or Second 4 would be such that the helper would go through to Azusa, in which case the Lamanda Park engines would wait until the Azusa helper came west. It would always be headed west because it turned on the wye at Azusa, thus making the trip back to Los Angeles safer than backing.

Another interesting point regarding this helper operation was that, according to special rule 37 in the timetable, because of weight restrictions, only two coupled locomotives of the 3129 class or heavier were allowed on bridges C-136, over the Arroyo Seco near Highland Park, and A-140 over the Los Angeles River between Broadway and Mission Tower. The three light engines from Lamanda Park were thus required to uncouple and run one-two over both these bridges and recouple on the far side.

The Lamanda Park passenger helpers were finally phased out as postwar trains dwindled in size and the converted 158-class FT diesels and later the F3’s and Alco PA’s began to bump the big 4-8-4s. But it was sure a memorable experience for this railfan while it lasted.