The best present ever? Seeing the new Orange Blossom Special go by 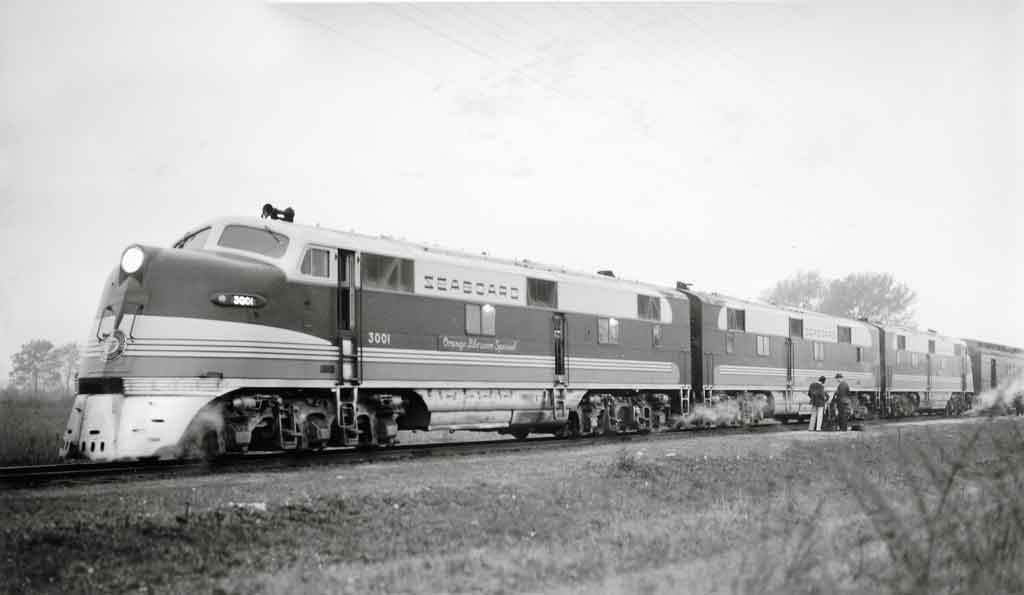 A trio of new Seaboard E4 diesels, perhaps the very ones “David Watson” saw in Florida three months earlier, shows off the citrus-hued Orange Blossom Special livery in March 1939.
Hugh M. Comer, David W. Salter coll.
To be addressed by my first and middle names by my parents meant one of two things. Either I was in a heap of trouble, or there was very good news. On my 10th birthday, the words “David Watson” meant good news.

In December 1938, the good news was that my folks had decided to leave early from our home in Pitts, Ga., about 60 miles south of Macon, for our almost annual Christmas vacation in Florida with relatives. I had no idea what plans were in store, but we drove directly down to “Unca Bill’s” home in Avon Park, Fla., near Sebring. Uncle Bill was the foreman at a plant south of Avon Park that made wooden crates for shipping citrus fruit. The plant, located between lines of the Atlantic Coast Line and Seaboard Air Line, shipped quite a bit of freight by rail, using both carriers.

On December 17, my cousin Billy and I were told that we were going down to Sebring to “see a new train on the Seaboard.” Not too much was said other than it was the “delayed” part of my birthday celebration and we were going to see “history in the making,” which meant little to a couple of 10-year-olds.

Upon arriving at Seaboard’s Sebring depot, we parked on a slight rise on the west side of the station and Uncle Bill had Billy and me, plus my dad, accompany him to the depot. He obviously knew the agent and asked if he could get two tickets on the Orange Blossom Special to Avon Park for Billy and me to celebrate my birthday.

I guess Uncle Bill thought that the business he gave the Seaboard made him an important shipper and that he would have no trouble getting us on the train, but the agent looked him squarely in the eye and said, “Bill, the Orange Blossom Special only stops in Sebring for passengers for Petersburg, Virginia, or beyond. I doubt seriously if the ‘super’ would let it stop in Avon Park to detrain two kids from Sebring even if it derailed there!”

Even at age 10, it was not difficult to understand that our chances of riding the Orange Blossom Special were somewhere between very slim and none.

By this time we had learned the train would be powered by new streamlined diesel locomotives, and were reminded again that we would be a witness to “history in the making.” Frankly, I was about as excited to get to see the train as I would have been to ride on it. We walked back to the car across the tracks from the depot, where a considerable number of sightseers had begun to gather to watch the train pass.

Before long, we heard the deep sound of an air horn, barely audible south of town. Shortly, we heard it again much closer, and almost immediately the train came into view. It was about the most beautiful thing I had ever seen, as it glided closer and closer and then eased past the pedestrians’ self-made viewing stand. It was painted brownish green with yellow, and finished with a reddish-orange stripe and trim. The running gear and bottom were silver. There were three diesel units as sleek and shiny as one could imagine. To even attempt to verbalize this vision would have bankrupted the vocabulary of a 10-year-old!

As the train passed, many of the passengers seemed somewhat amused at the number of people who gathered to watch it, and several waved to the onlookers. A whiff of charcoaled steak lingered after the dining car passed. By the time the observation car went by, the train had picked up speed. Three passengers on the rear platform waved, and we bystanders waved back as the obs car with its drumhead disappeared down the track.

Uncle Bill and my dad were obviously disappointed that Billy and I had not been able to ride the train, but to us it did not matter that much. To me, just to see it was almost unbelievable.

My actual 10th birthday was December 13, 1938, and on that date I had been given a pair of pajamas and told that there would be more. The pajamas were exactly what I had requested, as they had black trousers with a red top similar to the uniform of the Royal Canadian Mounted Police. On the pocket was a logo that, to me, looked similar to that on Canadian Pacific’s locomotives, which were some of my favorites from pictures that I’d seen.

Ironically, I cannot name a gift I received for my last birthday, or even most of them since my 10th, but I will always remember that one! I could not have been given a better present than to see the Orange Blossom Special pass, and now these many decades later, I remember it as if it were yesterday.