Home / Railroad Stories: The Way It Was / On creating the world’s largest fusee 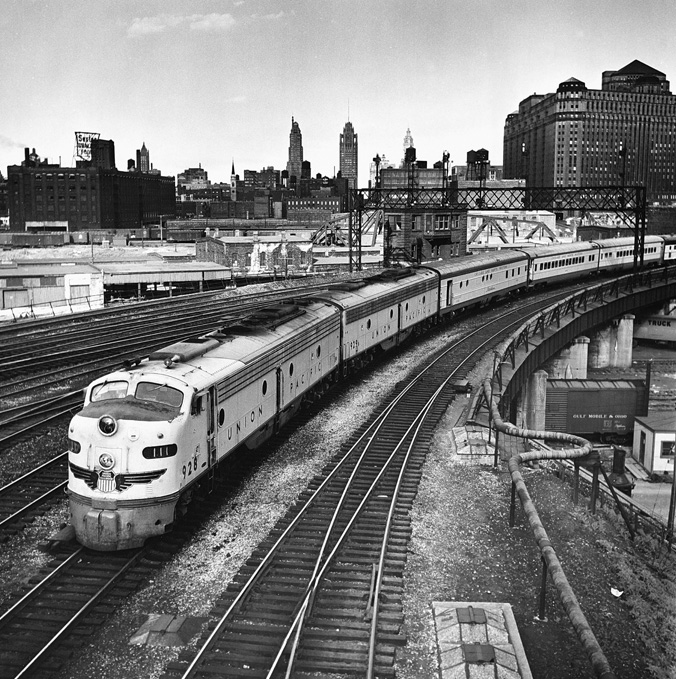 Union Pacific’s City of Denver curves away from North Western Station in Chicago at the start of its run west. Sister streamliner City of Portland once made an unscheduled stop at Oak Park, 9 miles west.
Wallace W. Abbey
In spring 1955, I was working as a ticket clerk at Chicago & North Western’s Oak Park (Marion Street) station 9 miles west of downtown Chicago on the main line to Council Bluffs, Iowa. One day the agent, Bill Lakanen, and I decided to clean out the baggage room, which had become a pigsty. A great deal of this mess was bundles of carbon copies of bills of ladings that had been issued at the station over the years. Bill had me call C&NW’s accounting office in the Chicago neighborhood of Ravenswood to see if there was any problem in us disposing of this material.

I called during lunch hour one day and the boss himself, W. G. Burns, system auditor, disbursements, answered. I outlined our problem and pointed out that the agents’ financial manual stated that these documents were to be sent to the Ravenswood accounting office by Railway Express. Mr. Burns quietly asked me the date of issuance of the manual. When I said “1929,” there was dead silence, then: “I don’t believe this. If you send these documents here I will personally come to Oak Park and break your neck.” Mr. Burns told me that we should keep the last seven years of any payroll records and burn the rest.

So we proceeded with our clean-up program, burning records in a 50-gallon drum between the tracks on the right of way. During the clean-up, we uncovered a box of water-soaked fusees that had dried out and were falling apart. We decided to place them in the bottom of the barrel where no one would see them burn.

So, on a nice spring evening, I was burning papers and fusees on the right of way and waiting for train 105, the City of Portland, to pass. The streamliner showed up to the east, on schedule but going quite slow; its usual speed through Oak Park was 50 to 60 mph. I looked west, and the signal showed “Clear” on 105’s track. Finally the train stopped with the lead E unit opposite me, and I immediately knew by the intense red glow reflecting off the unit’s flanks that I was in trouble.

Fortunately, the engineer was my neighbor, Henry Fain. He called down to me, remarking that this was the largest fusee he’d ever seen and asking if there was any trouble. The fusees had burned holes in the side of the drum, whose bottom glowed a bright red, which Henry took for a makeshift “Stop” signal. I told him to get out of town, and off he went. Ten minutes with a shovel cured the problem — otherwise I’d have been stopping trains all night.

I hoped that would be the end of it, but the next day, Pat Gillum, the chief dispatcher, called me as soon as I came on duty. He started out asking if I knew Henry Fain. This was just a lead-in question, since while Henry lived two doors from me, Pat Gillum lived at the end of the block! Pat next remarked that Henry was one of the best engineers on the division. I agreed, wondering when the axe was going to fall. He then said that Henry had made up the time he lost at Oak Park, which was good. Pat then wished me a good day and hung up. Bill Lakanen asked me what the call had been about, and when I told him, had a real laughing fit. I felt mortified.

This was the second time, you see, that I’d come to the attention of Pat Gillum. The first was as a vacation relief ticket clerk out at Elmhurst. I was to open the station at 6 a.m., about 10 minutes before the first inbound commuter train. However, Elmhurst had a temperamental safe in which the money was kept overnight. The agent, Fred Helwig, could operate the dial with his eyes shut, but everyone else had to play games with it to make it work. On my first day, I managed to hold up the 6:10 train for 10 minutes until I got the safe opened and could sell my tickets. The train crew was very understanding, as this wasn’t the first time this had happened.

Sure enough, Pat Gillum called later that morning, and his first words to me were, “Was it the safe?” When I replied in the affirmative, he said he’d been after the agent for ages to get it fixed or get a new one. But Fred wouldn’t give it up — they’d been together too many years.

Apparently my two strikes didn’t matter, for Pat later offered me a job as a telegrapher, which I had to turn down because I was not in a position to relocate. The C&NW in the early 1950s was a fun place to work. It was with sorrow that, after changes that caused my seniority to run out in 1956, I left the road for other fields.