Home / Railroad Stories: The Way It Was / My ‘bad-luck’ engine

For a Santa Fe fireman and a 4-8-4, three weeks in 1943 tragically proved the truth of an old axiom 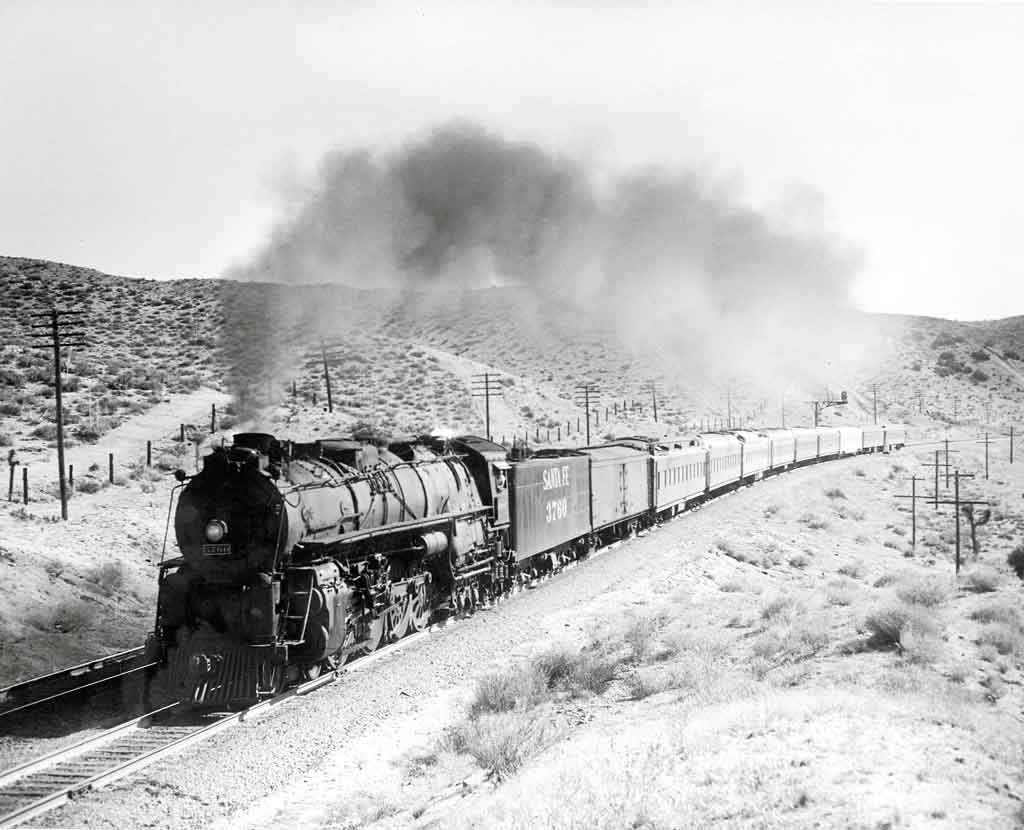 I was firing in passenger service on train 20, the Chief, between Los Angeles and Barstow. Our locomotive was the 3760, a good-steaming, good-riding engine. We departed on time from Los Angeles Union Passenger Terminal at 12:01 p.m., and arrived at San Bernardino on time. We took on water and picked up a helper engine for the climb up Cajon Pass. At Summit, we cut off the helper and proceeded downgrade through the 40-mph curve at Lugo and the long tangent into Hesperia on the left-handed double track. On this stretch we passed a long Santa Fe freight train working westward up the grade.

Through Hesperia, we were running at track speed: 90 mph. As we approached the town’s only road crossing, with our whistle blowing long and loud, the caboose of the westbound just cleared the crossing. Suddenly there was a loud crash and we had an automobile wrapped around the 3760’s pilot and smokebox. Joe Murray, the engineer, instantly put the train brakes into emergency, but at 90 mph, we traveled about one-and-a-quarter miles before we could get stopped.

The investigation determined that the automobile was driven by a salesman, who was instantly killed. He had worked the area for some time and had a packet in the front seat of his car containing some $1500 in cash, which upon impact was strewn along the right of way for the mile and a quarter.

At the time, our passenger engines worked between Los Angeles and Kansas City in a pool, meaning we would get them back about every five days. On the next trip west for 3760, I caught her out of Barstow on No. 23, the Grand Canyon Limited. It was then an evening train out of Barstow, and as we were coming into San Bernardino at Fifth Street tower, the 3760 encountered some more bad luck.

The Fifth Street crossing was protected with gates, but an auto had run through the gate, and since the other side was also blocked by a gate, the car was trapped on the track just as we entered the crossing. Our locomotive struck the car, and a person was ejected from it onto the track and killed.

About two weeks later I was on the 3760 again, this time on No. 3, the California Limited. We had just pulled into LAUPT, where the platform tracks were all stub-ended. Short of the end, there were crossovers to what were called release tracks, which allowed us, having headed into the depot, to cut off the locomotive from the train and run in reverse to the roundhouse. Car inspectors worked the incoming trains, disconnecting the steam, air, and signal lines. As we backed up, apparently a carman did not look when he backed away from between the cars and was struck by the tender of our locomotive, thrown under its wheels, and killed. The 3760 had claimed another victim. I am sure you can readily see why I termed the 3760 “my bad-luck engine.”

In relating these tragic events of so many years ago it is not my intention to downplay the deaths of these individuals, but to reiterate the point that safety was, and remains, of utmost importance on any railroad. Even the smallest lapse can result in tragedy. I had a railroad career of 44 years, and many incidents remain vivid in my mind. There was a saying around the railroad that accidents always come in threes. In the case of the 3760 and me, that saying was true.