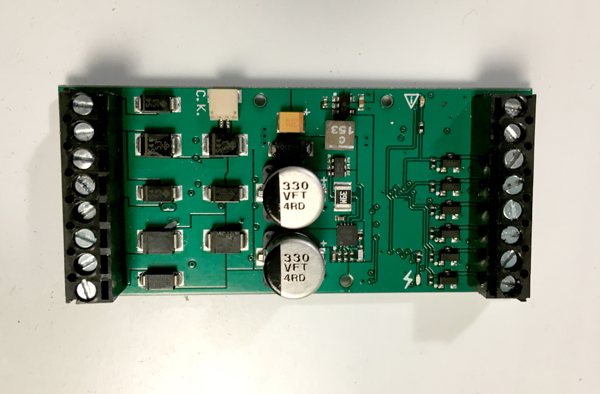 Cons: No external trigger for synchronized chuff—must rely on back-EMF chuff calibration (see text); some of the whistles are too similar to one another

Soundtraxx’s “Econami” board is a DCC-compatible sound/motor-control system. They offer three versions of the board; two are designed for low-current applications (one and two amps, respectively). A third four-amp board is designed for high-current applications, such as large scale trains (though the two-amp board could be used for small locomotives pulling light loads). Except for minor variations in the number of lighting-function outputs and audio amplifier output, the boards are functionally identical. The maximum track voltage is 26V—higher than most current DCC systems.

The boards come programmed with sounds for steam, diesel, or electric locomotives, with specific controls for prototypical responses for each kind of motive power. The board follows the recent trend of sound decoders of offering multiple sounds on the decoder. This allows users to customize the board by programming the sounds they may want for specific locomotives. The diesel board comes loaded with a half dozen or so different prime-mover sounds, different bells, horns, etc. The steam board has four different “chuffs” to choose from and a similar number of whistles, bells, and the like. This is much more convenient than needing to know prior to ordering the board the specific sounds you want. Plug the board in, then choose which sounds you’d like, with the board installed in the environment in which you’ll hear the sounds. I acquired the four-amp steam version of the Econami, opting to install it in my Bachmann K-27.

The decoder has fairly simple hook-ups, using two rows of screw terminals, one on either end of the board (see photo above). On one side is the DCC power into the board, motor output, and a +V and ground output, which you can use for lights and other features that do not need to be turned on or off. On the other end of the board are the speaker output and six controlled-lighting outputs.

There are actually three aspects of this board; motor control, sound, and lighting control. The first aspect, motor control, is the most important. If the locomotive doesn’t run smoothly, nothing else matters very much. The Econami (like many DCC decoders) uses the motor’s BEMF (back electromotive force) to control how the motor runs. This process allows for incredibly smooth slow-speed operation, where the engine will just crawl along quietly at maybe one or two scale miles per hour, no matter how great a load is coupled on.

I hooked the board up, set the throttle to “speed step 1,” and the locomotive began to crawl slowly and smoothly. Speed remained smooth and even throughout the throttle’s entire speed range. If there is some jerkiness to the locomotive at slow speeds, you can adjust the BEMF motor-control parameters. This is something of a black art if not an outright guessing game, so I was thrilled to see that the motor ran smoothly out of the gate. Other users (mostly small-scale modelers) report similarly pleasing results across a variety of motor types. Motor speed, top voltage, momentum, and speed curves (how fast the locomotive travels at a given speed setting on the throttle) are programmable through the usual NMRA-standard CVs.

The Econami offers the user the ability to program the board for prototypical braking. Traditionally, you control the locomotive’s speed with a knob or push buttons. If you want it to move faster, you turn the knob up. If you want it to slow down, you turn the knob down. The motor responds in kind. A prototypical locomotive doesn’t do that. Turning the throttle up will make it go faster; however, turning it down won’t necessarily make it go slower. That’s what the brakes are for. With the Econami, you can program a fairly high amount of deceleration momentum (the time it takes for the locomotive to respond to downward changes in the throttle setting), then use the brake-function button to slow the locomotive at a faster rate. For instance, I have my deceleration set at about 80% of the maximum allowed, and have the brake function set to reduce that to about 30%. This allows me to close the throttle and let the locomotive gently coast without losing an appreciable amount of speed, then apply the brake to bring it to a stop. There are matching prototypical sounds to accompany this process, so it sounds as cool as it looks. It does take some getting used to but there is at least an “emergency stop” option on this decoder. Unfortunately, my Airwire transmitter lacks an “emergency stop” button, so that’s not an option for me.

There is a fall-back, though (another cool feature of the Econami) called “momentum override.” It’s a throttle mode that does two things. First, it overrides all momentum settings on the controller so the locomotive is immediately responsive to changes in the throttle. If you have the throttle set to zero and enter this mode (F14 by default), the locomotive quickly comes to a stop, hence its usefulness as a quasi-emergency-stop feature. It also cuts your total speed in half so, as you adjust the throttle, your locomotive will travel half as fast as it would otherwise. Some decoders call this “yard mode”—operators find it useful for switching cars when they don’t want to wait for the throttle to respond to the momentum settings programmed in. It’s also nice for handing your throttle to junior engineers (who may not get the prototypical-braking thing).

I mentioned a correlation between the motor control and the sounds, of which there are a number loaded onto the board. You pick and choose the ones you want for your installation simply by changing the CVs for those sound sets. There are six different bells with different ring rates for each, 16 different whistles, different air pumps and generators. If I had one gripe, it’s that some of the whistles sound quite similar to one another (especially the ones in the lower register). I would have liked a little more overall variety to choose from. Still, I found three of four that suited this particular locomotive.

One of the cool selling points of the sound on this board is what Soundtraxx calls “Dynamic Digital Exhaust” (DDE), a programmed correlation between the cadence, tone, and volume of the chuff with respect to the locomotive’s throttle. As you increase the throttle, the chuff gets louder and sharper. As you back the throttle off, it gets quieter. If you close the throttle to 0, the chuff goes away completely. This is much more effective with a little momentum dialed into the acceleration and deceleration motor parameters. It’s really cool to close the throttle and see the locomotive just drift along with little more than a little “rod clank” noise, then goose the throttle to go up grade and hear a really loud “CHUFF CHUFF” as it works back up to speed. If you do not use momentum, the decoder also offers what’s called “drift mode,” which cuts out the chuff at the push of a function button, then restores it with the push of another.

I was at first distressed to see that Soundtraxx chose to omit any kind of external trigger for the chuff. Many folks use magnets and reed switches and some locomotives come equipped with optical or mechanical chuff triggers. This board relies solely on the motor’s BEMF to control the rate of chuff. I’ve seen other boards that use this kind of system and I’ve seen them fall woefully short of acceptable. This one, however, is pretty darned good. On my K-27, I set put the locomotive on rollers and set the throttle to a reasonable pace. I then adjusted the chuff rate to match the rotation of the drivers for the prototypical four chuffs per revolution. The chuffs stayed quartered throughout the entire speed range. Again, this is dependent on the motor’s BEMF, so its accuracy through the speed range may vary from locomotive to locomotive, due to differing motors. There are some locomotives for which it’s simply not practical to use external chuff triggers, so this decoder would be well-suited for them.

Overall sound quality is quite good. There are a few bells that have a little bit of background hiss with them, but you’ve got to really be listening to hear it. There is an overall volume control and you can also set the volume level for each specific sound relative to one another. The audio amplifier on the high-capacity board is rated at three watts, which I’ve found to be pretty loud.

There’s a little distortion of some sounds at the highest volume levels but I would think that most people will not come close to operating everything at 100% volume, where this would be an issue. I set mine at about 20%, which allows the locomotive’s sounds to fade away about 20 feet from me; this adds to the sense of realism. The Econami board does have a programmable seven-band equalizer so you can adjust the frequency response of the sounds to match your speaker and enclosure.

The Econami has six lighting outputs. Each of these can be programmed for any of 20 different lighting effects, including constant illumination (headlights), flashing strobes, flickering fireboxes, and more. Each output is set at 12V and has a maximum current of 100mA. Lighting effects can be unique functions or they can be paired with sound functions. For instance, I’ve got my headlights and classification lamps tied to the sound of the steam dynamo. As long as either one of these lights are on, so is the sound of the dynamo. When all lights are off, the dynamo goes silent. As those are the only lights I have on this locomotive, I didn’t delve too deeply into the operation of the other lighting effects.

Like many DCC decoders, the Econami will run on analog DC but you won’t have control over any of the sounds; you’ll just get the chuffs and maybe a start-up bell and cylinder-cock sound if you have that programmed in.

If this decoder is an indication of where the integrated sound-and-motor-control systems are headed, I think we’re definitely on the right track. Many of the things I dreamed about 30 years ago are now here. When combined with wireless battery-power technology, it’s definitely a good time to be getting into sound. Look for a video of my K-27 in action using the Econami on Garden Railways’ website.

One thought on “Soundtraxx Econami decoder”