A review of the American-outline locomotive equipped for DCC, DC, and sound, among other features 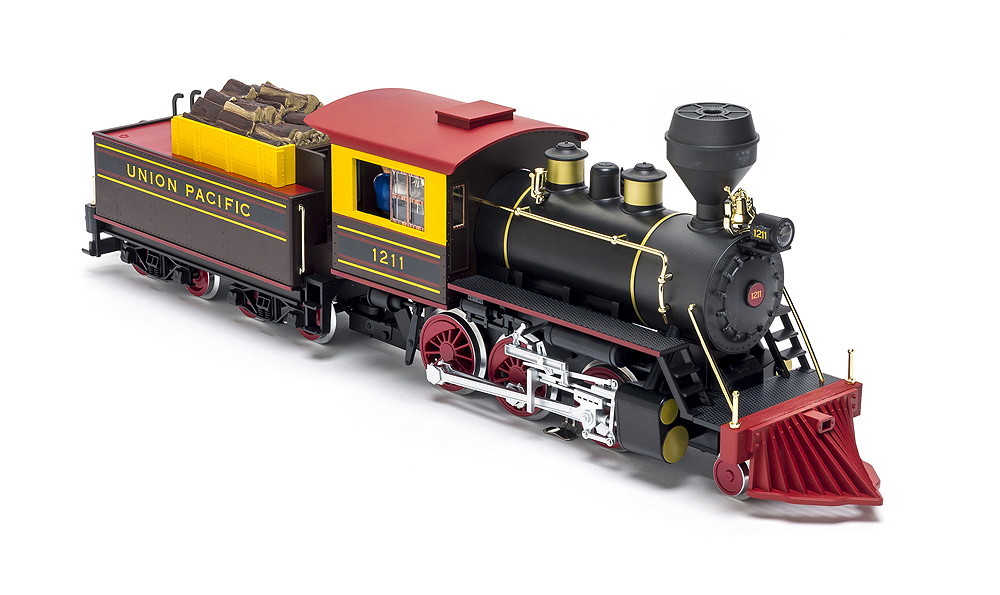 A right-front angled view of Piko’s mogul steam locomotive.
Garden Railways file photo
OK, I have a confession to make before I start. One of my favorite types of steam en-gines is the 2-6-0, commonly called a Mogul. To me, it was one of the pivotal pieces in the evo-lution of railroad motive power.

Produced from the 1860s to the 1920s, in some ways it and its contemporaries marked the end of the first generation of widespread steam power and started the second, giving a glimpse of the shape of locomotives for decades to come.

Product of its time. The classification was a maid-of-all-work design. It was the transi-tion from the 0-6-0 locomotives that were good for slow-speed service and switching, but tended to derail at speed.

Early 2-6-0s with rigid frames suffered the same issues, but when a swiveling, equal-ized single-axle truck was developed, the Mogul came into its own and with the 4-6-0 Ten Wheelers put the stalwart 4-4-0 Americans and other early models out to pasture.

The Mogul was an economical design that excelled at hauling medium-length freights and passenger trains. They were a good fit for Class 1 railroads as well as the short lines of the day. More than 11,000 of them were built for railroads across North America. Canadian Na-tional had the most with almost 500 of the type.

The 2-6-0 could be sized and built to the needs of a railroad. It was built in standard and narrow gauge; several broad-gauge examples were also made.

A number of running examples still exist, perhaps most notably CN no. 89 at the Strasburg (Pa.) Rail Road that’s a mainstay of excursion service at the steam park.

A left broad-side view of Piko’s Mogul locomotive.
Garden Railways file photo
At home anywhere.
PIKO’s 2-6-0 isn’t based on a particular prototype, but has charac-teristics of some built in the early part of the 20th century. It’s the more contemporary design with straight boiler courses the length of the body.

Our model is lettered for Union Pacific and comes in a colorful paint scheme that in-cludes yellow with faux-wood accents on the window frames.

The tender is for an engine using wood as fuel, and the locomotive has a balloon stack to match. Other road names have coal or oil tenders; some have a similar stacks while others are straight. It also has a cowcatcher-style pilot.

Slipping the locomotive out of the box, it feels hefty, even though much of the body is made of plastic. The tender and engine wheels are hard chrome, and the frame and substantial motor give it a solid feel and a low center of gravity. The valve gear is a durable plastic, and all materials are good for indoor and outdoor use.

Getting the engine ready for the track is easy. All the user has to do is apply the detail parts, which include brake cylinders under the cab on both sides of the frame, and handrails for the walkway steps on the head end. All parts press fit into existing slots and holes.

The brake parts go in easily, and if desired you can use a drop of cyanoacrylate (CA) ad-hesive in the slots to make sure they stay put. The handrails fit tightly into their holes and be-cause of their angle they are held fast. Use caution not to bend them too much to get them in; if the holes are too tight ream them carefully with a hobby knife until the handrail fits without warping or torque. As the plastic is gold plated, I don’t recommend applying an adhesive.

That’s it, the Mogul is ready for the rails. It’s track powered and has 6-wheel pickup. It can also pick up power through its slider shoes. 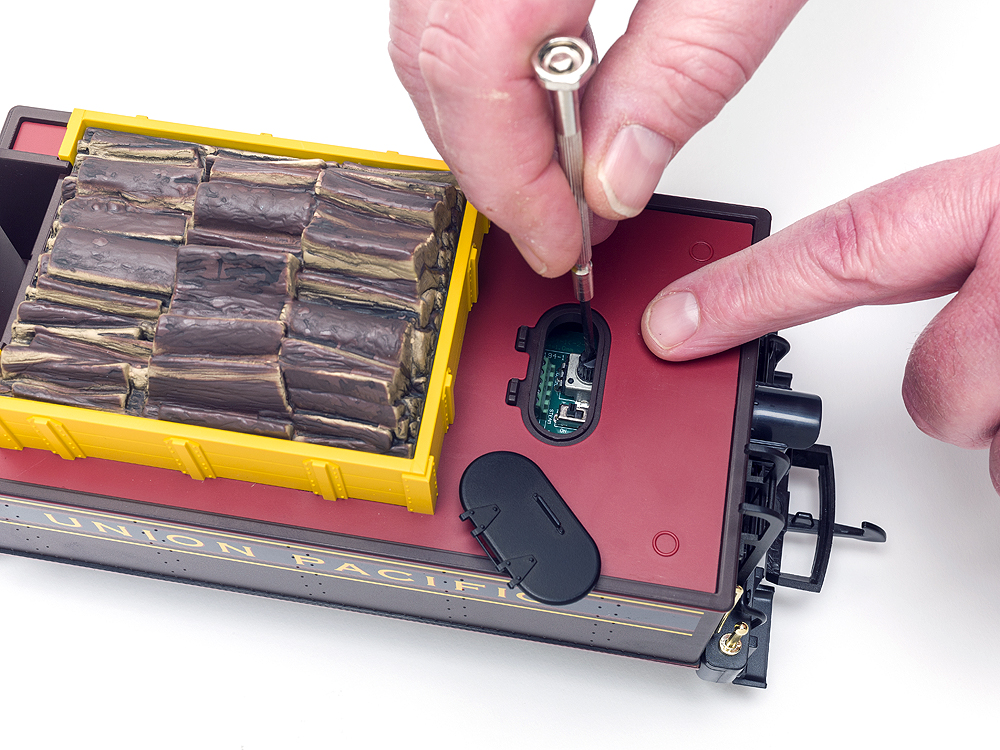 Top view of Piko mogul’s tender and two hands over an open hatch, one holding a screwdriver. The tender holds the DCC circuit board.
Garden Railways file photo
On the track.
The locomotive is equipped with a SoundTraxx dual-mode Digital Command Control decoder. To get the most out of the locomotive, a DCC system should be used. However, many of its functions can be accessed by DC users by using track magnets (no. 35268). They can activate the whistle and bell.

I tested the 2-6-0 with PIKO’s Digital Central Station (no. 35010) and Navigator remote throttle (no. 35017). The system found the locomotive immediately at its default 0003 decoder address. The number of the locomotive and other variables can be changed by altering the decoder’s Configuration Variables (CVs).

The locomotive’s DCC circuit board is housed in the tender. The tender mates to the engine and communicates with it through an 8-pin connector in the “drawbar.” A latch holds both together; the connection is quite secure even under load and nicely executed.

The locomotive’s power mechanism is the same one found in its 0-6-0 switcher and both 0-6-0 and 2-6-0 Camelback models, so it’s a proven unit. The tender is also shared with previous models.

PIKO recommends a break-in period for the mechanicals that has the user run the locomotive without a train for 30 minutes in both directions. We found the locomotive ran smoothly out of the box.

The digital features include headlight and backup light, which can be changed to half-intensity; bell; latching and short whistles, steam-release hiss; smoke control; brake squeal and release. It’s not a ton of features, but it’s really all you need with a steam engine.

There are a few other nice functions in the decoder. One is an inertia override that temporarily gets you past the momentum settings. The other is a half-speed function, which is useful for switching and other tasks, and really lets the user have fine control.
Lighting on the locomotive is directional and has a old-timey amber glow to it. The sound and whistles work well, and the 5-volt smoke unit pushes plenty out of the stack. A bottle of Seuthe smoke fluid is included.

The two front drivers are equipped with traction tires, so it pulls well. I ran three cars behind it on level track and it pulled them with no problem. I’d say it could tote 6-8 freight cars on straight and level track, or a passenger train with 4-5 cars. It’s not going to be the heavy hauler of your roster, but it’s great for branch-line power and it looks good doing its job.

The sound is great on this locomotive and it does a nice job of matching the chuffs to the revolutions and power.

If the hissing and popping become too much for you just lift the tank hatch on the rear of the tender. Inside you’ll find a volume knob that can be turned down (or up) with a flat-bladed screwdriver.

A very useful engine. As a fan of the Mogul, PIKO’s model impressed me. It’s well-proportioned and has a great digital feature set that’s not going to overwhelm you if you’re a newcomer to DCC. Even if you’re an old head, it’s going to be plenty.

The 2-6-0 looks great and is fun to run. It’s at home on freight or passenger trains, so it’s very versatile, and can be your only locomotive, or an important part of a bigger fleet.

Best of all, it’s a solid runner. One might be at home on your railroad, too.