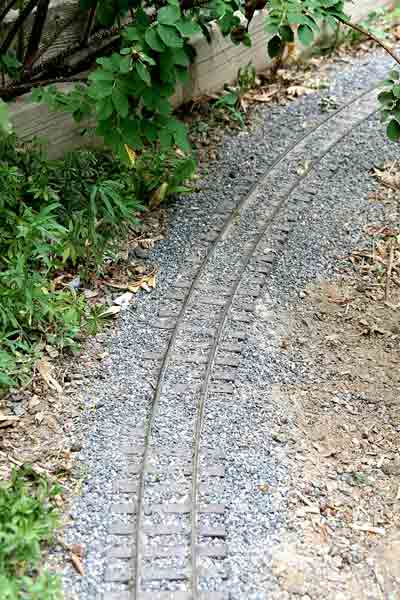 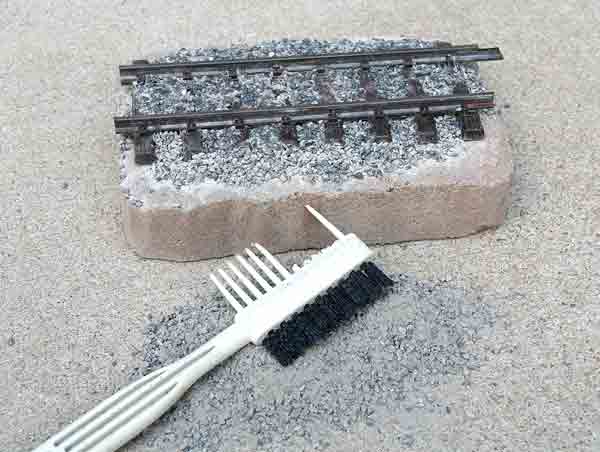 Kevin Strong
When it comes to ballast for the garden railroad, there are two common concerns. First is the size of the ballast. Prototype ballast is typically between 1″ and 2″. The crusher fines that many of us use vary from dust-size to a scale 10″ or so. Second, if we were to use a source of “scale” ballast (and it does exist), it would be relatively fine and easily wash away.

Locomotion’s “G Scale Road Bed” aims to alleviate both of these concerns. The company’s ballast is screened to be uniform in size and is made up of fairly even, gray granules about 116″ in diameter, which scales out nicely in all of the usual garden-railroad scales. When spread around the track, it presents a scale appearance not found with many other commonly-available garden-railway-ballast materials. But what good is scale ballast if it’s going to wash away the moment the first rain falls?

That’s where the Portland-cement-based binder that’s mixed into ballast comes into play. Once you spread the ballast on your track, you wet it down. This activates the binder and the roadbed becomes quite solid—not so concrete-solid that you can’t chip it away with a screwdriver for maintenance if it becomes necessary—but solid enough to hold the track and ballast in place.

There are some things that must be considered when fixing your track and ballast in place with this product, as mentioned in the instructions. First and foremost, the rails have to be able to move freely in the ties to compensate for expansion and contraction. If you fail to do this, the rails will expand and, as they do, will put stress on the ties, since they’re firmly attached to the ballast. This stress will either flex the ties enough to break the binder in the ballast or break the ties altogether. Either way, it’s not good for the track. If your track is of the type where the rail is attached to the tie strips via screws on the bottom, these screws must be removed prior to ballasting. The rails must be able to slide through the ties once the ties are set into the ballast. (This is described in the instructions.)

Then I took a spray bottle, dropped in a little dish detergent, and filled it with water. (The dish detergent lowers the surface tension of the water so that it flows more easily.) Once the ballast was fully saturated, I let it set for 12 hours or so, and then it was good to go. The test sample did a very good job of holding the track to the brick as well as holding the ballast together. There was some surface ballast that brushed away but, altogether, the ballast stuck together well. I could actually carry the paver brick by the rails on the track.

To test the product on a firmly-tamped base of crusher fines, a length of track on my own railroad provided the necessary test bed This was a section of track along the back fence that’s constantly being trampled by my two dogs as they fiercely protect the backyard from the local squirrel population. The PVC pipe I had been using as a track anchor kept moving with thermal expansion, so the track was just floating in the ballast (not necessarily a bad thing but insufficient in this instance for the canine-patrol route). I spread the ballast over the track along this section, then smoothed it to the proper contour and tamped it in place.

Locomotion Works provides a two-sided tool specifically for spreading and tamping the ballast. One side is a stiff bristle brush for brushing the ballast over the ties; the other is a long comb-like tool designed to tamp the ballast between the ties. The brush works very well but I found the plastic on the comb-side of the tool to be a little soft; some of the tines began to bend as I tamped the ballast, although the tool still worked well. (The brush side works remarkably well for clearing debris out of the points and flangeways of switches, too.)

With the ballast spread and cleared off the top of the ties, I took my hose, set the dial to “mist,” then wet the ballast. You could use the “shower” setting, too, but do so with fairly low water pressure and apply the hose not too far above the track. Otherwise, you’ll splash the loose ballast all over the place. Once the ballast dried, everything was solid and should withstand the paw traffic of my two fearless defenders. It can still be broken apart with a screwdriver and hammer if the need ever arises. Some ballast was still piled along the rails, interfering with the flanges, but the brush knocked that out of the way in short order and trains ran smoothly.

The manufacturer recommends not using this product near the points of switches (you don’t want to cement your points in place). I’d be tempted to amend that to just making sure you do a good job of sweeping the ballast out of the points and maybe keep the ties a bit more exposed around the points, to maintain a cohesive look to the track.

The ballast comes in two bucket sizes—two gallons and five gallons. I found that one gallon of ballast did about 10′ of track on my railroad, so a five-gallon bucket would probably do 50–60′. That’s about a dollar a foot for what will be a permanent coating of scale-looking ballast. (Also, because of its solidity, it will prevent weeds from growing up through the track, too.)

I’ll be interested to see how this product holds up over the winter’s freeze/thaw cycles and subsequent seasons. I think that the primary worry wouldn’t be how well the ballast holds up over time, but making sure to maintain enough play in the rails themselves so the track can expand and contract without breaking things apart.

While it’s not common for garden railroaders to bond their ballast in place, it has been done successfully. If you’ve got a section of track that’s particularly mobile that you want to keep in place, or a particularly photogenic section of track where you’d like nice, scale-looking ballast for photographs, this product would be a great solution.