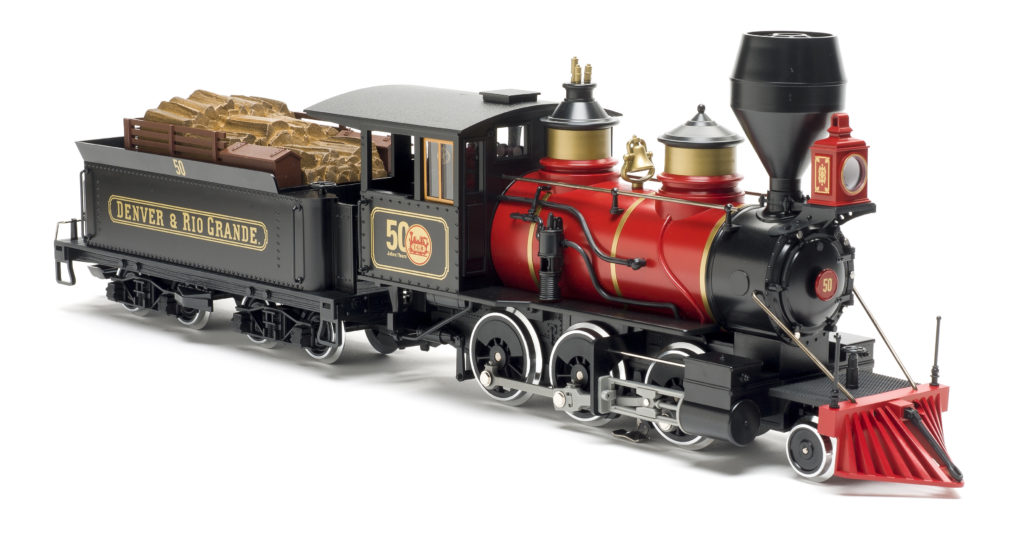 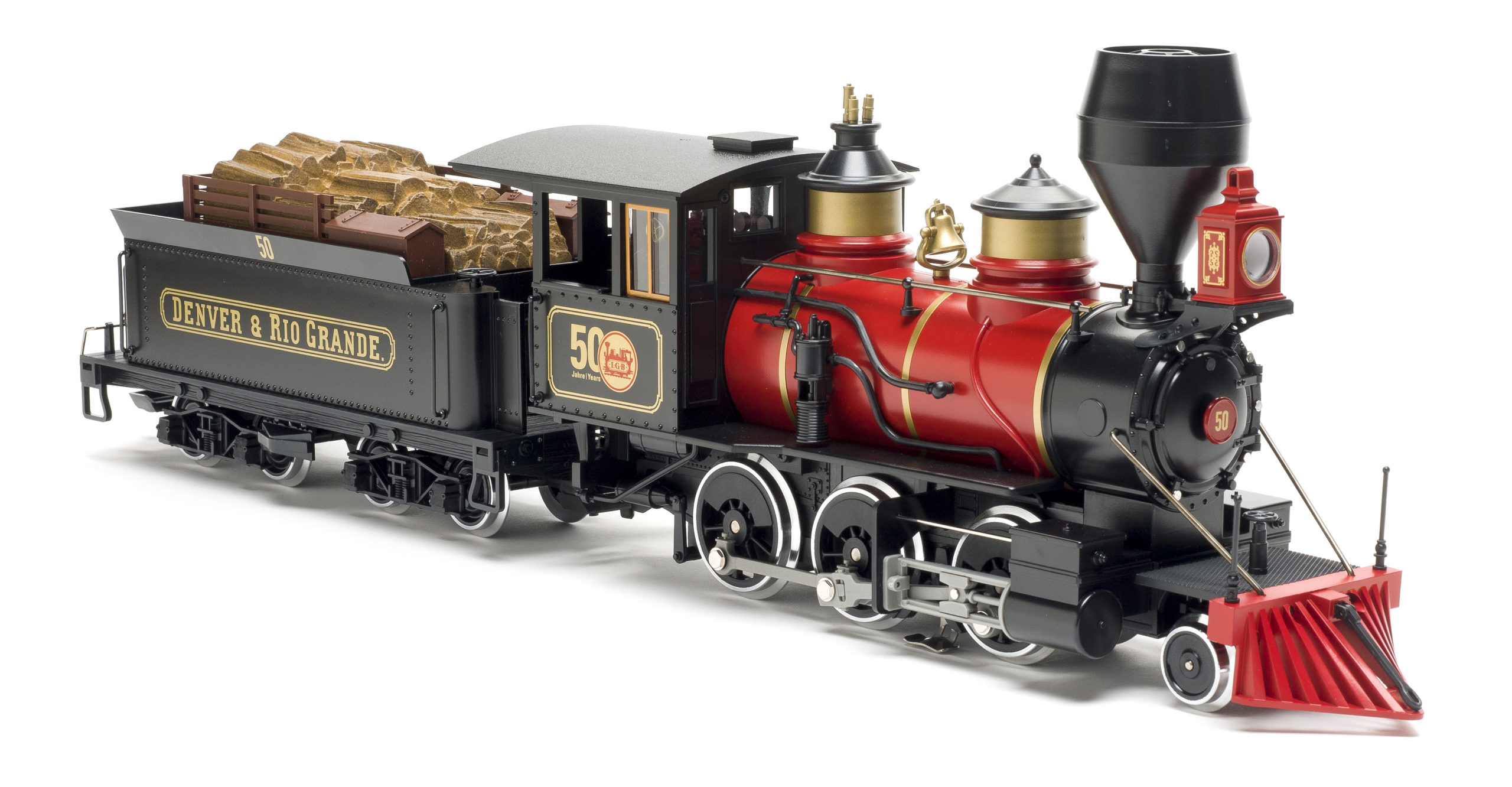 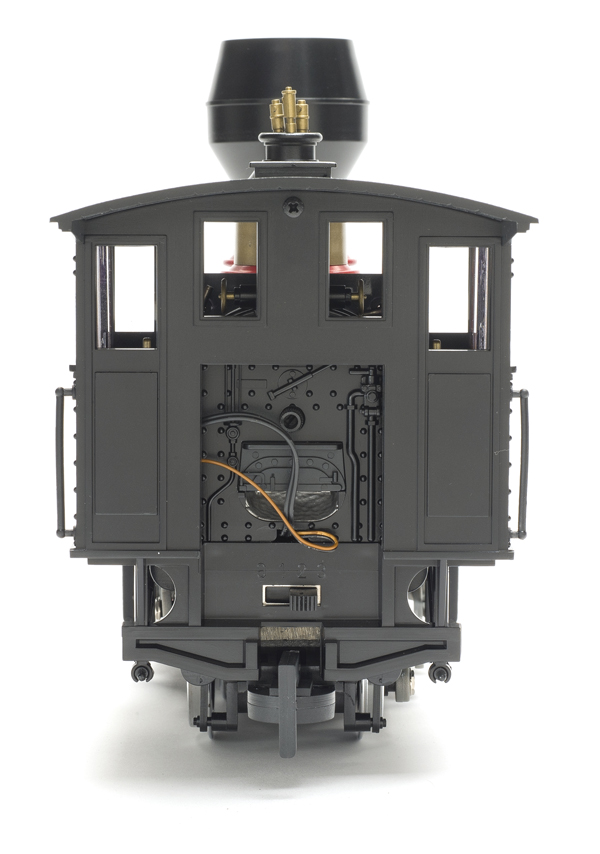 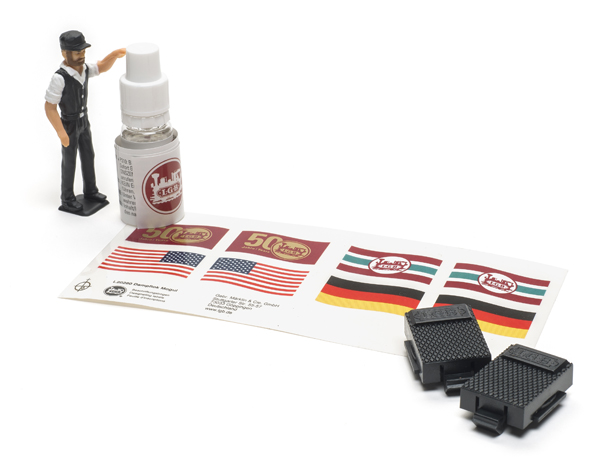 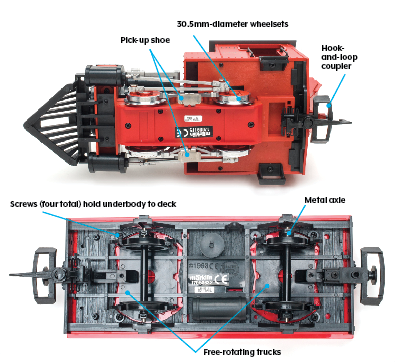 Bill Zuback
LGB first introduced this locomotive in 1984, and they have since offered additional versions and paint schemes. It’s fitting that they would release a new version of the locomotive to commemorate their 50th Anniversary.

LGB’s model represents the locomotive as delivered from Cooke. Drawings were published in the December 1998 issue of Model Railroader magazine (available here). The overall dimensions of LGB’s model match favorably to these drawings in the model’s stated scale of 1:22.5. (Note: 45mm track scales to 1 meter at that scale, so the model is technically gauged about 3″ too wide compared to the prototype.)

THE MODEL. The weather-resistant plastic model comes with a prototypical, but decorative link-and-pin link on the front, and LGB’s hook-and-loop coupler on the rear of the tender. The tender is connected to the locomotive with a hook which goes through a loop on the forward truck. There’s an electrical connector for power and sound that routes between the engine and tender, and then plugs into the front of the tender. Track power feeds up from both the tender and locomotive. Two of the four axles on the tender pick up power, as well as four of the six drivers on the locomotive, plus two pick-up sliders. On the backhead of the boiler, there’s a switch and a volume knob for sound. The switch has four positions. Three of the four positions turn everything on, and the fourth isolates everything from the track. There’s a working headlight and simulated flame in the firebox.

The well-rendered fictional paint scheme with crisp graphics commemorate LGB’s 50th anniversary. I did notice some curiosities with the finish on this locomotive. The most noticeable are the gray plastic side rods, rear cylinder head, and crosshead guide. I’ve looked at photos of previous versions of the Mogul, and in most of them, the parts are painted silver. On this model, the gray plastic looks unfinished. Also, the brass parts on the locomotive are painted a brassy color, where previous versions had these as polished or plated brass.

The reason for this design change is intriguing. LGB/Märklin has included a fan-driven smoke unit in this locomotive that’s synchronized with the chuffs from the sound system. Every time there’s a chuff, the fan pulses and pushes a puff of smoke up the exhaust stack. But that’s not the only place smoke will come from. LGB also included two tubes which run smoke down to the cylinders. These tubes run down through the space previously occupied by the stud which held the smokebox to the frame. The tubes route the smoke used to simulate steam escaping through cylinder cocks. It’s not a large cloud of steam, but it’s noticeable and certainly evocative of the prototype.

PERFORMANCE. That brings me to what seems to be the biggest innovation on this engine–the new sound and motor control decoder. It’s designed by Märklin, and works natively on analog DC, DCC, and Märklin’s digital control system. The motor control is good. The locomotive crawls at a very slow pace, (a scale 1mph at lowest speed setting) and is smooth and even throughout the speed range. Top speed on a 20 volt DCC system is a scale 35mph, though the user can slow this down if they desire via programming. Under analog control, top speed with 14 volts to the track is 14mph (scale). Top speed with 22 volts to the track is 29 mph (scale). These top speeds are prototypical for this engine, whose timetable speeds averaged 15 miles per hour. In terms of current draw, the motor will draw about 1 amp with wheels slipping, and when stalled draws about 2.5 amps. The unit is a little light, but the traction tire helps muster about 16 ounces of drawbar pull. That’s ample for a prototypical length train.

The sound quality is also good. It’s important to note that you must turn the chuff sounds on via the F6 button on your DCC controller in order to hear them, as they’re not turned on by default. The whistle, bell, and other sounds will work even if the chuff is turned off. The F8 key mutes all sounds. The chuff varies in tone and volume with the speed of the unit, as you would expect to hear on the prototype steam locomotive.

There are two whistles, a long and a short whistle. The short whistle gives a “toot” with the press of the function key (F3). The long whistle (F1) turns on with one press, and off with a subsequent one. Typically in U.S. conventional practice, the long whistle is mapped to the F2 key, which on many DCC systems is a momentary function allowing the whistle to sound for the duration the function button is pressed. The manual states you can re-map functions to other keys, but it is inadequate in explaining how that is accomplished.

The sound recordings for the brakes, air pump, wood being thrown into the firebox, two station announcements, and bell are all good quality. However, the bell chosen for this decoder is wrong for the locomotive. It is a recording of an air-rung bell as one would find on a diesel loco or modern steam locomotive. This Mogul would have a manual hand-run bell.

This locomotive also runs on traditional analog DC power. Under analog DC, you must apply 6 volts to the rails in order for the locomotive to “wake up” and turn the lights and sounds on. If you do a lot of prototypical operations (switching, etc.) then you’re constantly turning the power up and down and changing direction. That means the locomotive will stop making noise when you turn the track voltage below 6 volts. It also means that the locomotive can’t be double-headed with non-DCC Moguls, as the non-DCC Moguls will be already be moving with 6 volts to the track before this one even wakes up. The engine works best on filtered DC. It will run on pulse-width-modulated DC, but speed control is less reliable in this mode of operation.

Bottom line, this is a great-looking commemorative locomotive which I think fans and collectors of LGB will appreciate. The Mogul is about as iconic a locomotive as you can get in garden railroading, and an obvious choice for LGB.