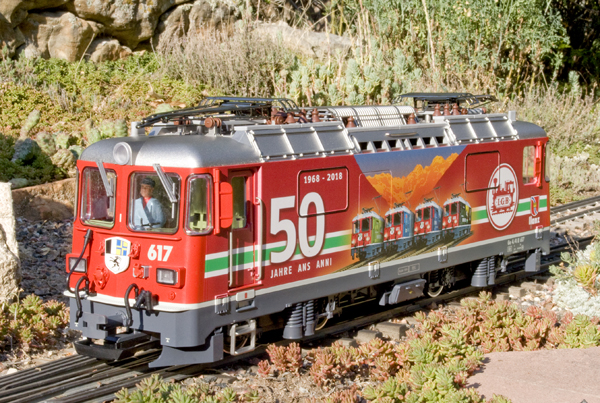 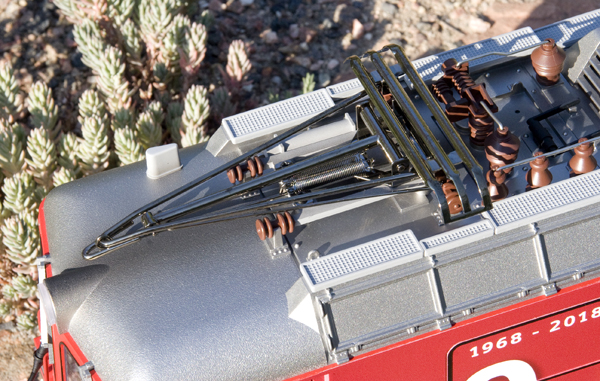 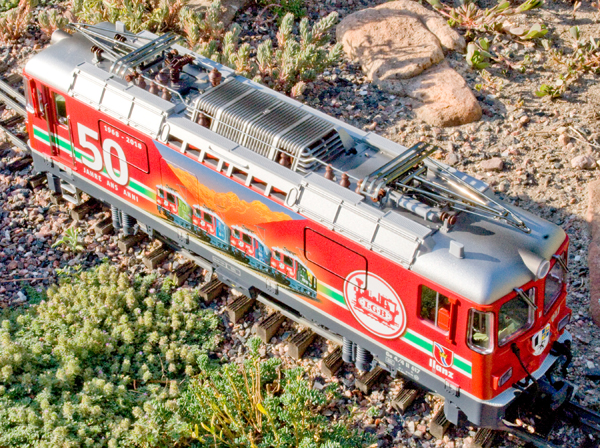 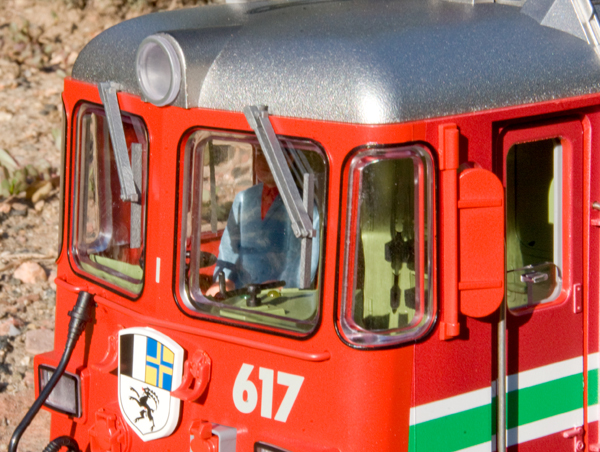 Marc Horovitz
The Rhaetian Railway (RhB) of Switzerland began looking for a successor to its iconic “Crocodile” locomotives in the early 1970s. They found the answer in the Ge 4/4, built by the Swiss Locomotive and Machine Works. “Ge” indicates narrow gauge while “4/4” means two powered trucks with four wheels each. The first locomotives of this series began service in 1973, followed by a second group in 1984. They proved successful in both freight and passenger service. In 2004 the RhB began upgrading the locomotives with modern computer controls. Today, the locomotives (23 in all) still provide mainstay power for the railroad.

LGB first introduced this model in the late 1990s and it has proven quite popular with modelers. It looks splendid in front of LGB’s red RhB coaches.

It’s easy to look at photos of this engine and think that its livery was something LGB made up for this model. Fifty years of producing model trains is worthy of a special paint scheme. It’s also prototypical. The RhB has painted several of their Ge 4/4s in commemorative paint schemes in the past 10 years. They painted Nº 617 in the scheme shown here to commemorate the 50th anniversary of LGB’s line of outdoor model trains, so both the prototype and the model wear this special livery, and wear it well. Paint and graphics are crisp and faithful to the prototype.

Under the paint, LGB did a good job on the model of this locomotive as well. It measures within just a few inches of the prototype in all dimensions. It features operating (and functional) pantographs, as well as working windows and doors. It is, by all measures, what we have come to expect from LGB in terms of build quality. The engine comes equipped with LGB’s hook-and-loop couplers, with a hook installed on one end, and with an optional hook included that can be installed on the opposite end. Like everything in LGB’s product line, the engine has a minimum radius of two feet. However, I would not want to run this loco and a string of the long RhB passenger cars around curves that tight.

While this locomotive has been in production for many years, its current electronics are new. It comes DCC-equipped, with a decoder that provides motor and sound control. I’ve gotten into DCC sound and motor control for my trains, and I enjoyed playing with this engine.

Motor control is smooth and slow-speed operation is good. Top speed is a little fast—I timed it at around 70mph, as compared to the prototype’s maximum of 56mph. That can easily be slowed by programming the CVs on the decoder. Lights are directional, though the cab light does not appear to operate independently of the headlights. It would be nice to turn off the cab light when running at night, as a brightly-illuminated cab would be a hindrance to the crew. Red markers illuminate at the end opposite the headlights when lights are turned on. (Modeling note: this locomotive features the rectangular headlights common on some of the updated Ge 4/4s. Earlier LGB models featured the original round headlights.)

Pantographs operate in conjunction with the direction the locomotive is running, plus they are functional in that they can pick up power for the locomotive. A switch inside the front cab allows you to select between rail or overhead-power pickup. When changing direction, the collapsed pantograph will rise first, followed by the opposite one collapsing. This (as with the prototype) keeps power to the locomotive. If you do not have overhead wires on your railroad, you can lock the pantographs in the collapsed position, lest they snag on a low-hanging branch, bridge, or tunnel portal—they stick up fairly high when fully extended.

While this locomotive comes equipped with a DCC decoder, it will run just fine on traditional analog DC track power. It prefers a linear (smooth, filtered) DC signal, though it will run on pulse-width-modulation (PWM) track power as well. Slow-speed operation under PWM is erratic, though. All lights, sounds, and directional pantograph action work in analog DC. Track magnets can be used to trigger a long or short whistle, depending on which side the magnet is on.

Sound quality is quite good. It’s more difficult to describe the sound of an electric locomotive (as opposed to diesel or steam) in terms of fidelity to the prototype because the sounds are much more subtle. I watched a few YouTube videos of these locomotives in action, and the sounds from the decoder compared favorably to what I heard in the videos.

There are two whistles—a long and a short—each playable by a separate function key. They are not “latching” whistles, meaning they do not play for as long as you hold the key down (common on US-prototype sound systems); rather they play for the set duration of the recording. Other sounds include those of the pantographs raising and lowering, air compressor, brakes, and other operational sounds. There are also “station announcement” sounds, which can be played by pressing various function keys. When you change direction, a longer station announcement plays with each change of direction. I found this to be tiresome. However, I don’t see this locomotive being one that will spend a lot of time switching in the yard. Still, that’s something I would like to be able to program independently of the change-of-direction function.

My biggest complaint about this locomotive is the manual. It looks fairly thick, but alas, it’s the same six pages in six different languages. There’s not a lot of depth about the decoder’s operation; you are referred to LGB’s website but there was no download there. After contacting the manufacturer, they added downloads for both the instruction manual and an exploded parts diagram. They confirmed the instruction manual has decoder information specific to this engine, but there is no separate document for the decoder.

Overall, I’m impressed with what I saw and heard. For LGB fans, it’s a great way to mark 50 years of building cool model trains. For modelers of Swiss railways, it’s prototypical to boot. This locomotive with a string of matching passenger cars in tow would be an awesome sight on most any railway.