Ideas for using viaducts on your garden railroad 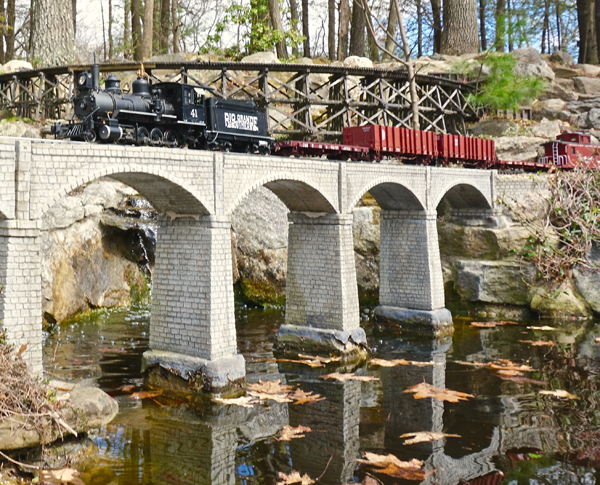 Photo 1
If at first you don’t succeed, get better materials, says Stan Ames, whose previous viaduct lasted less than five years. This strong and graceful viaduct, a good fit in Massachusetts, is in its ninth year serving the SJR&P. Read how in Regional reports.
Stan Ames 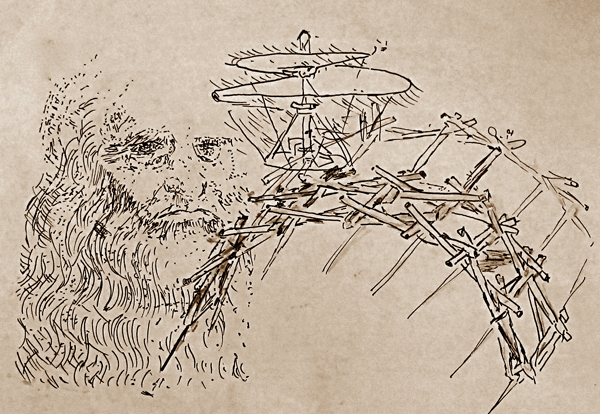 Photo 2
A master of mechanical principles and leverage, da Vinci sketched a self-supporting bridge made from pieces of wood and no hardware, one of the early examples of using arches in bridge design.
Drawing by Nancy Norris 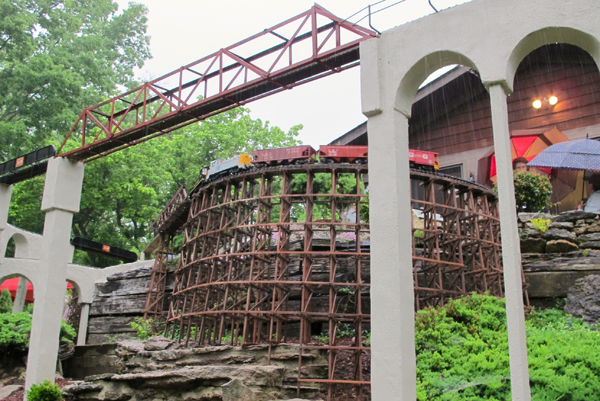 Photo 3
Ray and Charlotte Hughes’ aptly named Skyridge Railroad seems to float near the tops of trees. Straight truss bridges get trains across a wide gap, whereas concrete viaducts and wooden trestles curve out over the lower ravine.
Nancy Norris 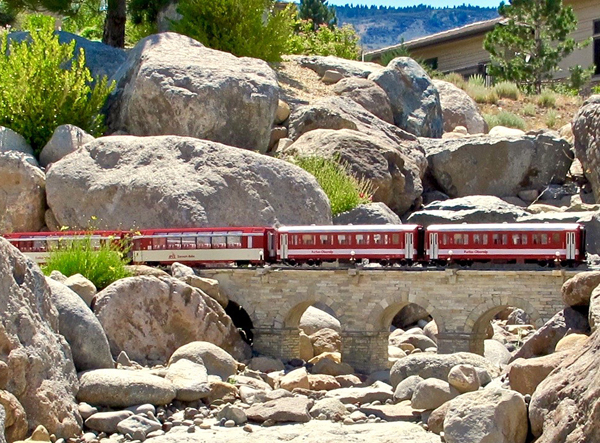 Photo 4
Hawley MacLean’s Alpine & Western Pacific Railroad slopes off the Sierra foothills, modeling the Swiss Alps and Bernina Express. Spring torrents wash over this rock-strewn gap, but the viaduct of concrete and stone has held firm over ten years, as if hewn from the surrounding stone.
Nancy Norris 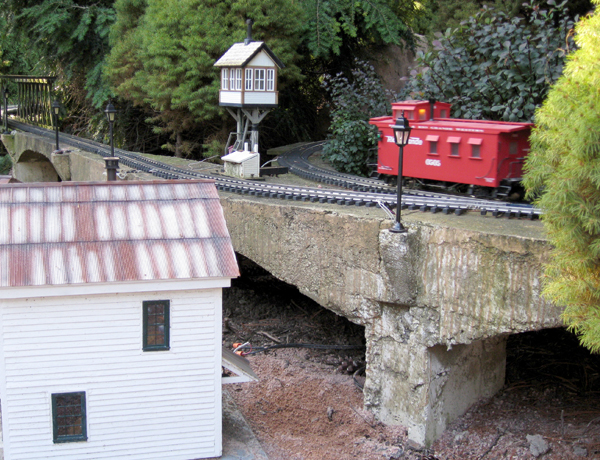 Photo 5
The viaduct on Brad and Carol Bennett’s B&C Railroad elevates the roadbed and provides a scenic backdrop in this scale town. Mature trees and greenish growth on the concrete bridge show age and tell us this railway has been in use a long time—even at night, with aid of lighting.
Nancy Norris 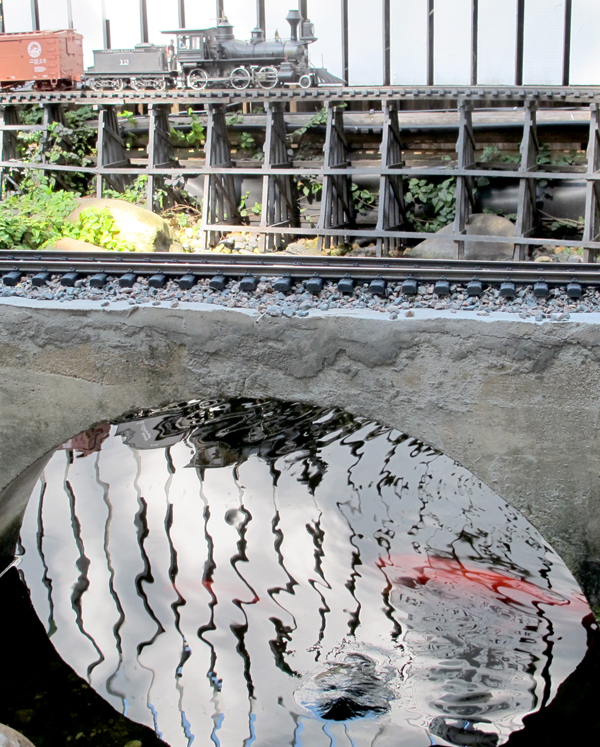 Photo 6
Jay and Melinda Archer’s Key West Extension artistically positioned elements so that we view the iron horse and the iron fence reflected under the arch while searching for koi swimming in the pond. Bridges over water are fun.
Nancy Norris 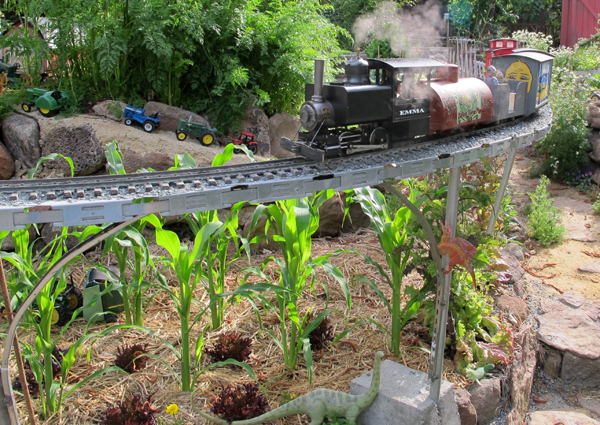 Photo 7
The author’s Agriculture & Gravel Elevated returns on the dogbone loop, supported deep under the raised bed with concrete and rebar. Tested during numerous steamups, trains fly past carrot trees over the “bones” of what will be the author’s cantilevered, molded-grout viaduct. “Dwarf” corn and red lettuce crops ripen in the valley.
Nancy Norris
In your empire, it’s good to have choices when building a viaduct over land or water. This story recognizes the uniqueness of each bridging circumstance. Bridge the track from one hill to the next or carry your railway down a long slope. You can link your garden railway to the history of age-old structures. Add curving arches to your
yard for a more organic centerpiece. The rules of construction must match the “sense of place.”

Leonardo da Vinci (1452-1519) had an eye for proportion and a head for math. He also had a hand in creating bridge formulas and a helicopter design hundreds of years before they were “accepted” by modern engineers. His self-supporting, portable arch bridge (photo 2) was used in battles to get soldiers over obstacles like water, then re-kitted and carted to the next fence or stream. This design shows the inherent strength in an arch.

Nothing is more encouraging than seeing others’ success. Stan and Deb Ames’ second attempt (photo 1) is a knockout. Stan and two others tell how they constructed viaducts in Regional reports.

In their steeply sloped Ohio yard, Ray and Charlotte Hughes figured out how to cantilever their railway out over a cliff by installing a series of tall viaducts to keep the track grades reasonably level (photo 3). In the Sierra foothills, Hawley MacLean made two stone viaducts to switchback up a hill crossing a dry creek—no worries during spring washout season (photo 4).

…and get over it

For me, erecting a viaduct in my Aggie has taken time and circumspection. Early mistakes progressed to new directions. I worked with a welder to fasten a steel frame out of Flex-C Trak, galvanized steel posts, and curved rebar or shelf steel (photo 7). This skeleton of a viaduct allowed us to run trains for two years. We will have to wait for the finished look. I’ve already come to terms with the idea that it will be more of an art piece than prototypical, and yet functional all the same.

It’s said that cement products will get stronger during the first 100 years, then start to get weaker. Some have been decommissioned about 90 years after their construction.

• Form making of one arch to be repeated
https://tinyurl.com/FormMaking

• Helix, sloping, and bridging viaducts in garden railroads (one the author built is in here) Go to https://images.google.com and type “garden railway viaduct.” 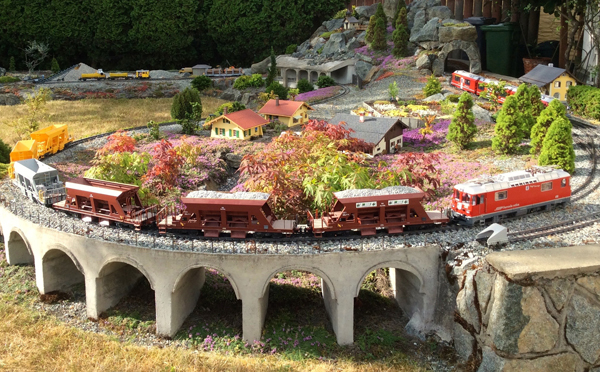 Modeling Switzerland’s Rhaetian Bahn, Keith was fortunate to have a mentor.
Keith Yundt 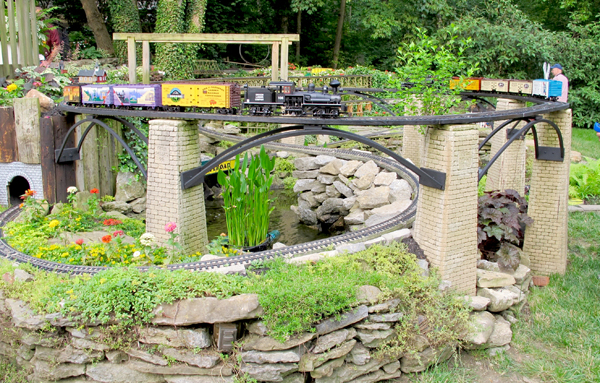 Richard almost built a trestle here, but his son came up with this better idea.
Nancy Norris

Zones are USDA Hardiness Zones What made for a successfully built viaduct?

Stan Ames
Chelmsford, Massachusetts, Zone 5
Weatherproof materials
When we built the first expansion of our railroad, we designed a viaduct going over a pond, with a second stone-arch bridge going over the stream that feeds the pond. We chose a viaduct and bridge built by Lone Star Bridge and Abutments for this project, which looked great but, unfortunately, the material slowly disintegrated in New England’s acid rain and harsh winters. Since this was a key railroad feature, we had to find a solution. Mark at Lone Star no longer had the molds, but he gave us permission to make new molds and cast replacements.

The viaduct is made up of three primary castings: the center span/arch, a pier, and a piece that connects the center spans to the pier. The arch bridge required a fourth casting. We were fortunate to find pieces around the country that had been used indoors and were still in good shape. The sections were fixed up, desired improvements made, and silicone molds were constructed.

The pier and centerpiece were made using two-piece molds, while the center arch required a three-piece mold. For the arch bridge, we built a single-piece mold to allow us to make this bridge in various widths by casting the mold twice and gluing the pieces together.

The next problem was finding a material that would hold up in New England weather. We eventually found a material made by Quikrete called Non-Shrink Precision Grout, sold by Home Depot. This material looks and acts like concrete but is much finer and very hard. The viaduct has now been outside for nine years and looks like new (“Greening,” photo 1 above). We now use this material to cast all of our concrete and stone structures around the railroad.

Keith Yundt
Victoria, BC, Canada, Zone 6b
Help from a friend
As a big fan of the amazing engineering prowess of Switzerland’s Rhaetian Railway, I really wanted to incorporate the look of its curved, sweeping viaducts with their graceful arches. Fortunately, my late friend Fred Malone had built several viaducts for his own line, and helped me using the excellent system of construction he had worked out.

The first step was to prepare a solid base for the substantial weight of the structure, to prevent settlement. In my case, this meant removing the organic soil layer, compacting the subsoil, then putting down and compacting a layer of crushed 3/4″ roadbase (sharp gravel), a minimum of 3-6″ deep. Next, we took a sheet of plywood and cut out a curved base for the viaduct, to have something to which to screw the side forms at the bottom. This bottom piece became sacrificial and was buried under the ground level. Arches were cut into the two long, side forms to match the final desired look, and the sides were screwed to the curved base.

We cut out intermediate pieces of wood for the inner sides of each arch leg and screwed these to the viaduct sides and bottom already in place, to form the vertical portions of each arch. At this point we pounded in some rebar inside each arch base—about four pieces of 1/2″ bar in each segment. We then used tin sheets to span between these vertical wood segments, forming the curved underside of the arch, as the tin takes on a natural curve when secured at each end. We braced under each curved piece of tin with foam or wood to prevent the weight of the cement from distorting the curves when poured. To create a decorative “lip” at the top of each arch, we placed the tin arch slightly lower than the arch cut in the side forms and added another outer form to each side of the viaduct to contain the pour.

Once everything was formed up we placed some longitudinal rebar, bent to the curve of the whole structure. The internal wood and tin surfaces were coated with old motor oil as a release agent. We made sure to have all of our placing tools at hand prior to mixing the cement: a trowel, something to help push the cement down into all the nooks and crannies, and an electric palm sander to act as a vibrator on the side forms to help remove any air pockets and consolidate the cement during the pour. After a day or so, I carefully removed the forms and tried to keep the concrete damp to help the curing process. I dealt with places where the concrete looked open or showed some surface voids by dry-sacking the viaduct. After dampening the concrete, I took an old jute sandbag and rubbed some dry cement powder over the face of the viaduct, filling in all the voids with the dry mix to leave a nice-looking finish. Once the viaduct had cured (say a month), I drilled in some railing posts, laid and ballasted the track, and was ready to test out my tribute to the RhB!

Richard Wolf
Cincinnati, Ohio, Zone 6-7
Opening up the wall
Our vision was of a massive wooden trestle in the very front of the railroad to be the centerpiece, but we soon realized this large “wall” would obstruct the view and create an obstacle to maintenance. My son developed the solution. Large wooden piers were installed first, then a concrete façade was designed and applied.

We constructed a pattern for the piers from 1″-thick Styrofoam insulation. We simply drew our design on the insulation. At this point, we could make any design we wished, so we marked the front and back facades with the railroad name. To line up the mortar lines, we drew them side-by-side on each mold. All together we needed three patterns: one for each side, one for the front and back, and one for the cap. The design was then cut into the foam with a stencil cutter. This enlarged the drawn lines and allowed a solution of 50/50 acetone and dishwashing liquid (a retarder) to melt the Styrofoam to give it a more pronounced effect. Then, to stop the reaction, 100% dish soap with a quick water bath cleaned everything up.

A mold was made with silicone molding rubber and cheesecloth (for durability). We mixed mortar dye into white cement for the pier pieces. For the laminated redwood arches, I constructed an adjustable curved pattern to make an arch of whatever length I needed. I laminated 1/8″ x 1″ redwood strips with Tightbond III glue. The original arches were made of cedar and lasted only five years, thus the change.