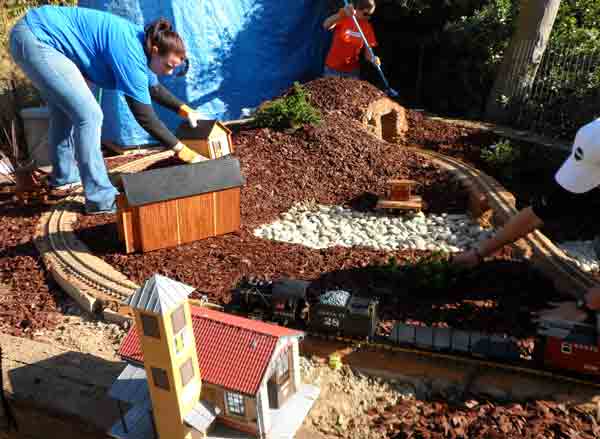 Here volunteers rest within an hour of completion. This story board shows all the steps.

Dick Friedman, president of Sacramento Valley Garden Railway Society, was contacted by Make-A-Wish Foundation. He assembled a team from the club to plan the layout, order materials, and then drive 1½ hours to help build the garden railway. Here, Dick assembles a donated depot for David’s layout.

Day 1. Tricia from Make-A-Wish unloads flex track and a garden bench with the aid of volunteers from another team, Scotts Miracle Gro.

This is the blank slate, a flat yard that first needed cleanup. Electrical outlets are installed on the outside of the shed for yard lighting and the track’s power transformer.

The Home Depot team delivers the building materials to David’s rural home on a walnut orchard.

The Home Depot team member forklifts sacks of gravel into the driveway.

Concrete blocks begin to form the sub-roadbed for the train track. This method will help to make the track impervious to David’s four dogs.

One block at a time is filled with drain rock to stabilize the blocks, allow water to drain, and create a platform for the roadbed. Note the electrical conduit, which will be covered.

The dogbone’s sub-roadbed is in place and filled with gravel. Next up is the retaining wall.

A Home Depot worker chain-saws railroad ties, which are stacked, drilled and nailed with rebar two ties high, to make a retaining wall for the raised planter box.

Next, the planter is filled with soil and tamped.

Several cubic yards of topsoil will be moved into the garden planter box.

End of day 1, the basic shape of the railroad has been laid. Note the electrical conduit was stubbed up inside the retaining wall for wiring the track to the transformer.

Day 2. A tunnel was built from concrete blocks and all the concrete sub-roadbed is being covered with a stucco/sand mix and leveled for the track.

Two SVGRS members make sure the track doesn’t have to be joined in the middle of the tunnel.

As soon as the track is laid, the ballast of more sand with dry stucco is sprinkled over the track, brushed to a uniform thickness, not to cover the ties, then misted with water.

Having gained experience on his own layout, an SVGRS member makes “stone” portals from a stucco/sand/cement-color mixture using knives and scrapers.

A finished faux-stone portal acts like a retaining wall for soil on top of the tunnel.

A 12-gauge low-voltage wire from the transformer is connected to the track in two places in a parallel circuit. Later the wire will be held down with 6” bent-wire staples.

Team Miracle Gro built a hill over the tunnel, and here they create a river-rock dry wash.

The last stretch of concrete blocks awaits the stucco mix, the second portal is almost done and part of an old water feature becomes the base for another hill.

Soil is tamped, shrubs get planted and the plastic mountain bases are covered with stucco and soil.

The rear of the layout, also retained by ties, shows the dry creek.

To keep it simple, we installed no switches or sidings, but the dogbone tracks are parallel in front of the depot to give the air of busy-ness there.

The thin layer of stucco/ballast will still allow some expansion of rails, come summer’s heat.

Lastly, a few buildings create some industry to give David’s empire a start.

The teams – our one big team – couldn’t be happier at the end of day 2.

Make-A-Wish Northeastern California and Northern Nevada is one of 62 chapters nationwide. Since the foundation began in 1980, more than 250,000 wishes have been granted to children ages 2½ to 18 with life threatening medical conditions. This particular chapter began in 1983 and has granted more than 4,700 wishes. Make-A-Wish organized volunteers from 4 organizations to build a garden railway for 9-year-old David, whose Make-A-Wish dream for an electric train came true in two days of construction. 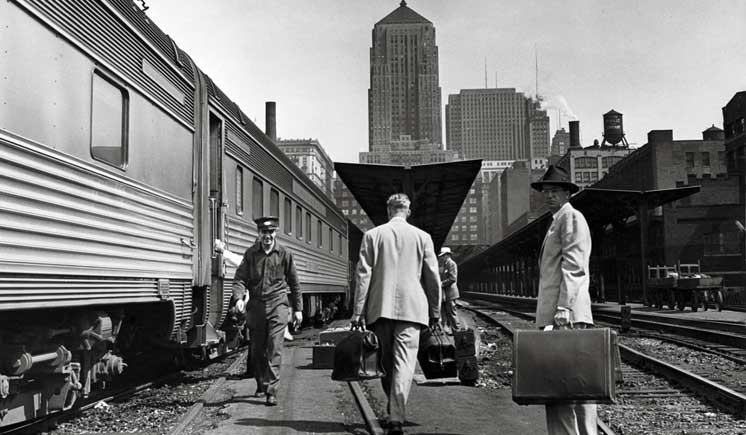