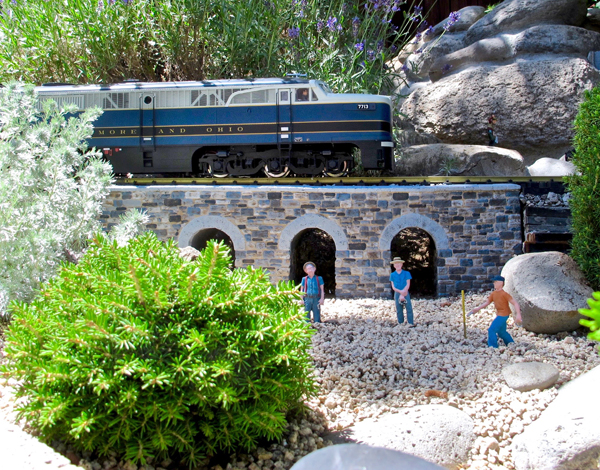 Nancy Norris
Common name: Dwarf balsam fir, dwarf silver fir
Latin name: Abies balsamea ‘Nana’
Plant type: Dwarf conifer
USDA Hardiness Zones: 3-8
Cultural needs: Moist, well-drained, slightly acidic soil; sun or part shade
Plant size: 10″ in 10 years
Dwarf silver fir’s dark green, fragrant needles (silver underneath) form a compact mound. Trim lower branches for a mini-tree effect. ‘Nana’ in the name means “small.” This is the miniature variety of the Christmas tree used on the east coast. Slowly growing near the side of a beautiful bridge, the bright-green foliage frames this exquisite scene of blues, which could be improved only if you visited in person to smell its balsamy-sweet aroma. Balsam fir tips often scent gift-store sachets, which you could make after pruning this tidy shrub. Although fir looks like spruce, you can do the touch-test to tell the difference. While spruce needles are needly, fir is soft, like fur. Also, fir leaves are flatter and lined underneath with two white stripes. Coming from the north, balsam fir does not like the heat and will often grow in the shaded forest for years, but your dwarf and miniature varieties will get leggy if given too much shade. Protect from hot afternoon sun in high altitude and hot summer areas. Look for other miniature firs—dwarf Korean fir (A. koreana ‘Lippetal’, Zones 5-7), adorned with blue fir cones, or a fir that looks frosted: A.k. ‘Kohout’s Ice Breaker’ fir.

One thought on “Dwarf balsam fir”