Home / How To / Gardening / Conifers, part 2: More ideas for trees 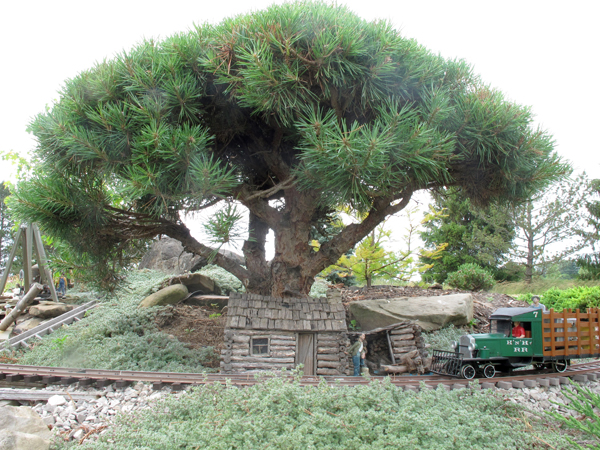 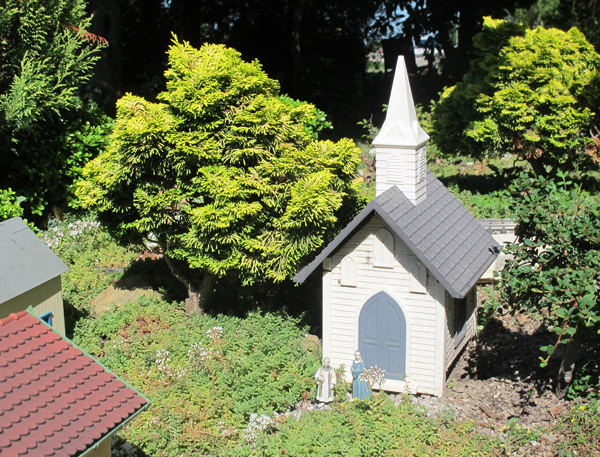 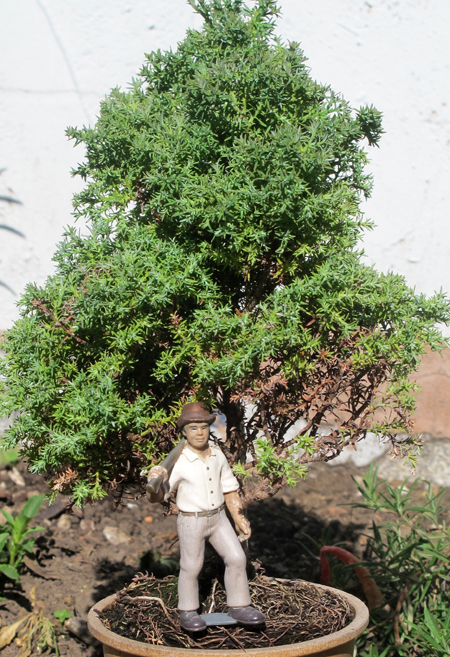 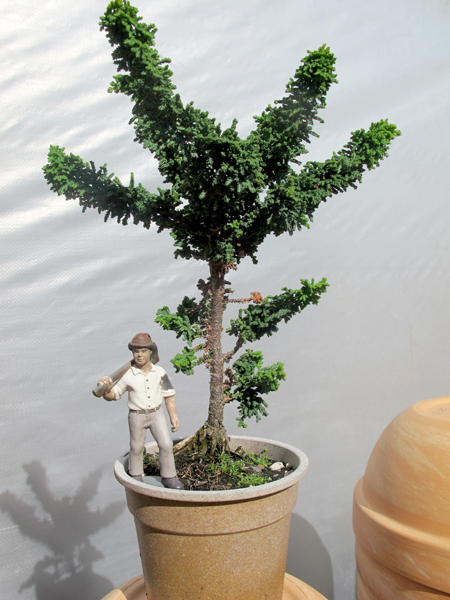 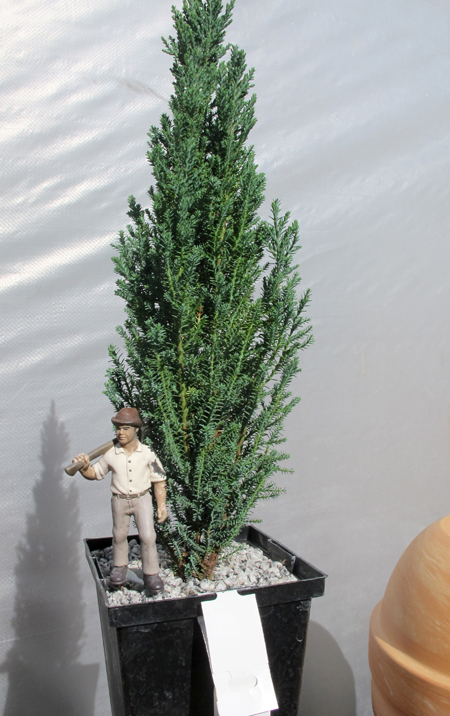 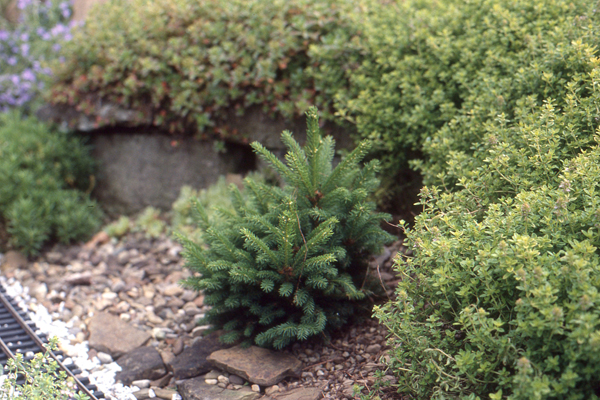 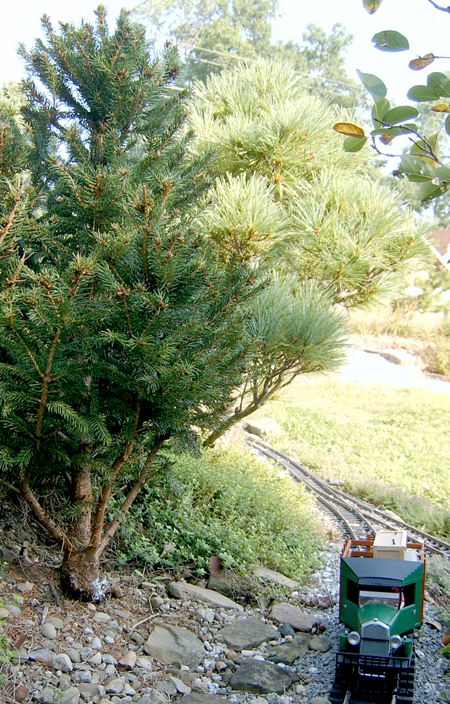 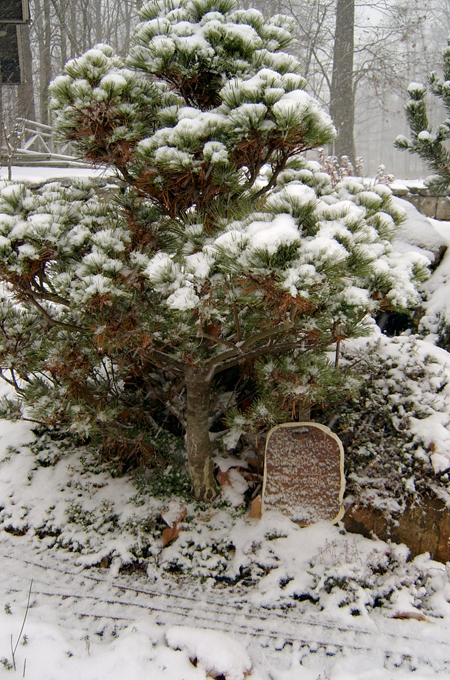 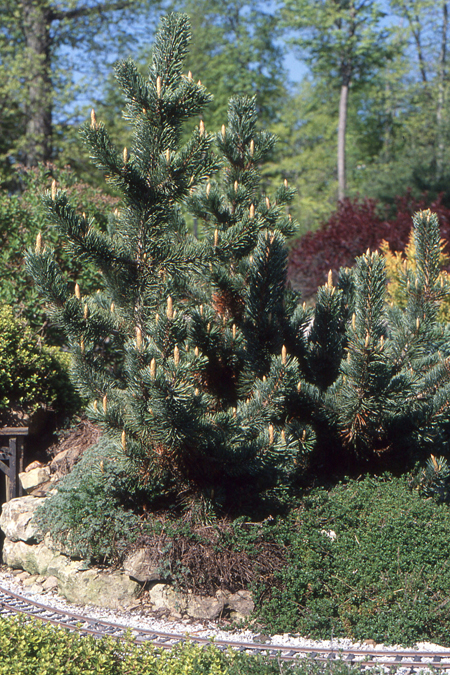 Photo 11
Bristlecone pine, 10 years old. Photo taken on the author’s former garden railroad.
Don Parker
This issue’s column will pick up where I left off in the last issue, showing more of my collection of photos of a variety of conifers suited to the requirements of a garden railroad. There will be a few others I’ll mention that might be worth the search for suppliers, locally or mail order. I’ll also summarize some principles of pruning and care of conifers.

Photo 1 shows a 2′ tall, 20 year-old dwarf Scots (or Scotch) pine (Pinus sylvestris ‘Nana’, Zones 2-7). Growing 3″ per year, it could reach 6′ tall and wide in 20 years if unpruned. I opened up the center of the tree by reducing the number of branches and it has maintained that structure. I tip-prune the “candles” (the elongated yearly new growth) with hedge shears every spring, which keeps the tree about the same size and the needles smaller than they would be otherwise.

Marc Langan planted two Lynn’s Golden Hinoki false cypress (Chamaecyparis obtusa ‘Lynn’s Golden’, Zones 5-8) next to the church on his Mulberry Creek Railroad (photo 2). These striking yellowish-green trees have fan-like foliage that adds interest to their layered look. A little judicious pruning will keep the trees in scale (they grow about 3″ per year to reach 6′ at maturity).

Photo 5 shows Ellwood’s Pillar Lawson’s cypress (C. lawsoniana ‘Ellwood’s Pillar’, Zones 5-9). It grows at a rate of 3 to 3 1/2″ per year, reaching 3′ in 10 years. It is narrowly upright, making a nice scale tree with a strong vertical effect. The foliage color is a blue-gray, providing a nice accent in the usual green landscape.

Other species of Chamaecyparis worth considering are: C. pisifera ‘Fairy Puff’, 1-2″ per year, light green with whitish, soft, feathery tips, rounded; C. pisifera ‘Golden Pincushion’, 1 to 2″ per year, yellow-green, low, irregular mound; and C. thyoides ‘Blue Rock’, 2 to 3″ per year, bluish green in summer to purplish in winter, upright. These and the above-described cultivars are from the Iseli Wholesale Nursery, which may help in your search for a retail supplier.

Pygmy Norway spruce (Picea abies ‘Micronata’, Zones 3-7), also known as sharp-needle dwarf Norway spruce (photo 6), grows up to 5′ tall at maturity. It is a good alternative to Alberta spruce but is different, with its forest-green foliage on branches that thrust upward. It is very hardy and tolerant of most soils but prefers slightly acid soil and good drainage. It can be pruned and shaped and kept smaller by trimming back the new growth each spring. Photo 7 shows a 12-year-old pygmy Norway spruce pruned in this fashion.

Another small spruce is Papoose Sitka spruce (P. sitchensis ‘Papoose’, rated for Zones 7-8, but growing in Chicago Botanical Garden’s Zone 5b-6a—photo 8). It’s also known as Sitka Colorado blue spruce because of its blue-green color. Papoose grows early into a rounded mound but eventually develops a central leader and becomes broadly conical. At 2″ per year growth, it will reach 2′ in 10 years and top out at 3-4′ in 20 years.

Dwarf American arborvitae (Thuja occidentalis ‘Rheingold’, Zones 2-7) is another golden-green alternative to the predominantly green and blue-green foliage of conifers. It is slow growing, developing a cone-shaped to dome-shaped tree, 3-4′ tall at maturity. The foliage turns bronze-yellow in winter, adding extra interest. It should be protected from harsh winter winds in exposed sites to avoid winter foliage burn (browning). Three 10-year-old Rheingold arborvitae (photo 9) have been pruned to expose their craggy-bark trunks, giving them an old, weatherbeaten look.

Two additional pines to consider are a miniature white pine (P. strobus ‘Umbraculifera’, Zones 3-7—photo 10) and bristlecone pine (P. aristata ‘Engelm’, Zones 4-7—photo 11). The former is a true miniature or dwarf, growing 2-3″ per year to a height of 3-5′ at maturity. Bristlecone pines are the iconic, twisted and blasted pines growing in the high Rockies and Sierra Nevada mountains, attaining ages of several thousand years. They are so slow growing that they may reach only 3′ tall in 10 years. Their deep-green color and varied shapes make them a fascinating addition to the railroad garden.

Care and pruning of conifers

For the most part, conifers are low-maintenance trees. If basic requirements are met, they are long-lasting and of easy care. However, there are some important factors to know when it comes to pruning.

Almost all conifers do not regenerate branches when they are pruned away (as opposed to deciduous shrubs, such as boxwood). This can be a good thing; when conifer trees are shaped to open their structure, they will retain that configuration. It also means choosing wisely when making those cuts; to paraphrase an old adage, think twice and cut once. Never remove more than one third of the foliage at a time. Also, clean out any dead foliage that accumulates in the denser center of small conifers to prevent fungal diseases.

There are four basic reasons to prune conifers: for form (to achieve a structure you want); for size (to control the rate of growth); for health (to remove dead or diseased parts); and rehabilitation (to try to improve an old or unsightly tree—the hardest cut of all).