What you need to know about this popular miniature tree 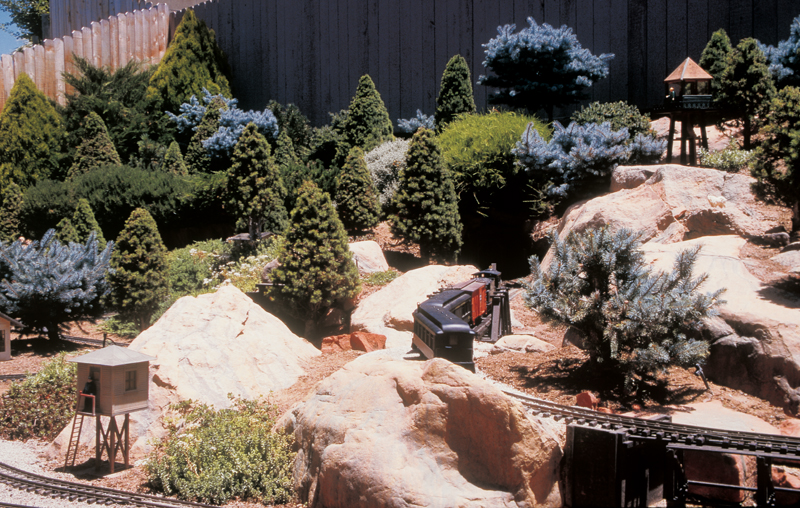 Dozens of Alberta spruce trees help create a mixed-conifer forest setting at the Little Vista Garden Railway of Larry and Pam Webb in Vista, California. Some of the trees are over 20 years old.
Pat Hayward 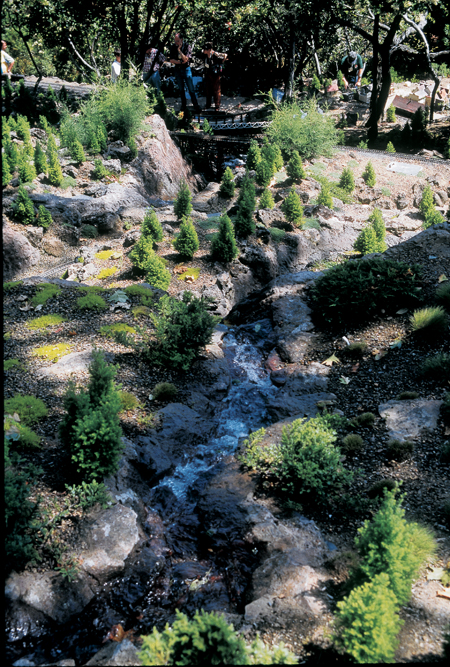 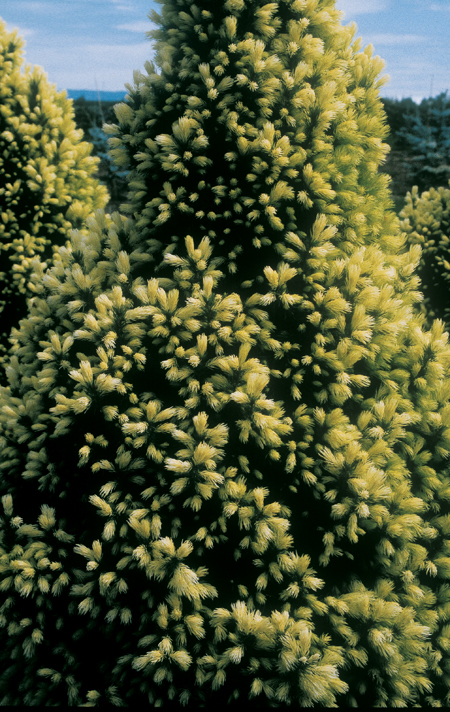 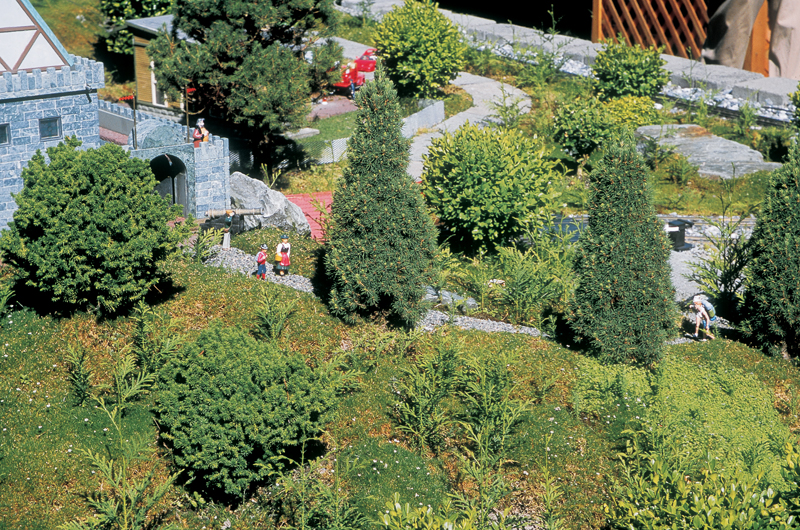 Jean’s Dilly spruce in the R&R Friendship Line of Heinz and Edith Eberle in Renton, Washington, are even tighter and slower growing than the standard Alberta.
Pat Hayward 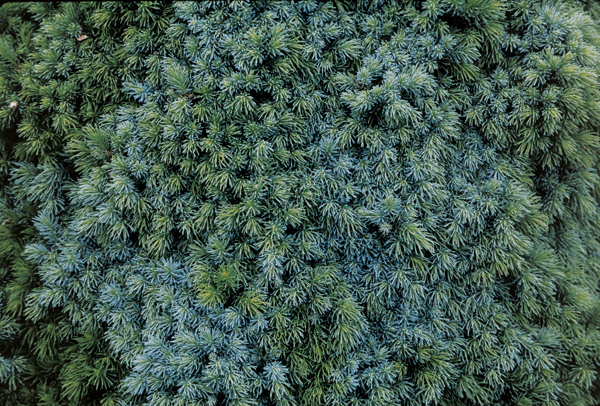 Several “blue” Alberta-type varieties are available, but so far, none is completely blue, as seen in this closeup of Sander’s Blue.
Pat Hayward

Across the country, hundreds of us rely on one, small scale, slow growing, almost perfectly conical evergreen to fill our miniature forests, towns, and mountains: dwarf Alberta spruce (Picea glauca ‘Conica’). How do you prune them, what kind of conditions do they really need, and how do you deal with pests and problems? Are there other varieties that might be suitable, as well? Here is a detailed guide to one of our most widely used outdoor-railway trees.

The small Alberta spruce trees that we know today were originally discovered in 1904 growing near Lake Laggan, Alberta, in the Canadian Rockies. Two horticulturists from the Boston Arnold Arboretum were traveling together and accidentally discovered a group of especially dwarf and compact seedlings growing beneath a forest full of towering white spruce trees. These seedlings were exceptional because white spruce (Picea glauca) are common evergreens, widely spread across North America, from New England to South Dakota and up to Alaska, but they usually grow to 60-80′ tall or more. Realizing the significance of such a find, they collected and brought the plants back to Boston, soon introducing these little trees to the gardening world.

As nearly perfect miniature evergreen trees, Alberta spruce are popular with the public for outdoor landscapes. They’re also highly desired as miniature, decorated trees at Christmas time. Since their introduction, millions have been propagated and sold all across the globe. It has been reported that the Alberta spruce may be the largest-selling dwarf conifer in the world!

Garden-railway use
Because of their shape, small-scale needles, and slow growth, garden railroaders most often use Alberta spruce as forest trees, usually massed for a more natural effect. You can also mix them with one or two other species of upright conifers (dwarf upright forms of Chamaecyparis, Cryptomeria, and juniper are a few excellent choices) for a northern, mixed-conifer forest. In towns or trackside, they can be used individually or in small groupings. Use a mixture of heights and sizes, just like you’d find in a full-size forest.

Care and culture
Alberta spruce are extremely adaptable to a wide variety of climates and conditions and are relatively easy to grow in USDA Hardiness Zones 3-8. When you think of their native habitat, it’s understandable why they grow best in slightly acidic soil with good drainage, a regular water supply, and cooler conditions. They will also adapt to warmer, drier conditions with extra care and attention.

When first planted, never let the root ball dry out. It takes about a year or so for the trees to become “established,” a point at which they can tolerate less-than-ideal conditions. They need direct sunshine in most locations but, if you live in a very warm or hot climate, they might grow better in a very bright spot, out of the direct sun. Topdressing with a small-grained mulch or underplanting with very low-growing groundcovers (such as moss, thyme, or veronica) will help keep temperatures cooler in the immediate vicinity of the tree. Do not fertilize unless you want your trees to grow faster and larger.

Pruning and shaping
Many garden railroaders prefer to prune and shape their Alberta spruce, opening them up and making them appear “less formal.” A good way to start new off with a newly purchased tree is to drastically prune it before planting. This gives the tree a good head start on its “new look” and saves your back and knees a lot of unnecessary stress. Remove foliage and branches on the lower trunk, then thin out the “head” or top of the tree.

Once in the ground, pruning and trimming can be done at almost any time it’s convenient. In colder climates, it’s best to wait until spring, right before the new growth emerges. That way, minor mistakes will be covered by the flush of new foliage. In warmer, temperate areas, Alberta spruce may push a second or even a third time during the growing season. This makes for extra pruning tasks, but also gives you plenty of opportunities to refine the shape and form.

For a natural forest-tree appearance, a good general rule is to remove every second or third branch, spiraling your way up and around the main trunk. Some people use clothespins or yarn to mark the branches that will remain before making any cuts, to help them visualize what the finished look will be.

Some people grow their Alberta spruce in containers set into the ground to keep them smaller and “root-pruned,” but this is a risky venture. In warm climates, the trees will dry out rapidly; in cold climates, the extra roots are necessary to survive the cold and extreme temperatures of winter. I don’t recommend this practice to most garden railroaders.

Dealing with pests and problems
The beautifully dense, compact growth of Alberta spruce is also its downfall when it comes to problems. In hotter climates, red spider mites are the major enemy, often attacking from deep within. By the time you realize there’s a problem, there are literally thousands of tiny mites sucking the vital juices from your tree. The best plan for dealing with red spider mites is prevention. Use a shop vacuum or leaf blower to remove fallen needles and debris from around the trees—red spider mites and other pests often lay eggs in fallen debris. Additionally, keeping the trees healthy and well-grown will allow them to thwart pests and diseases.

If prevention fails, try using a strong stream of water to knock the mites off. The next (safest and least toxic) option is to use an insecticidal soap that lists red spider mites on the label. As a last resort, there are chemicals specifically formulated to kill red spider mites, but they must be used at regular intervals to interrupt the phenomenal reproductive capacity of these tiny mites!

In some areas, winter or temporary drought-caused “burning” is a major issue. I’ve seen this happen year after year to the same trees, and the best advice I can offer
is, “wait it out.” Nine times out of ten, the trees will push plenty of new growth to cover up the dead-looking areas. Again, prevention is the key here. Mulching and monthly winter watering will help ease the stress. Be especially aware of potential burn if the tree has been subjected to unusual stress. Years ago, Jack Verducci’s railway full of Alberta spruce had a hard time recovering from the sudden loss of a large shade tree.

Closely related varieties
The standard form of Alberta spruce is the most easily found and least expensive form of dwarf white spruce. You can find it at just about any retail outlet that sells plants, it seems, including hardware and department stores. Here are few other evergreen varieties, along with their characteristics, to consider:

Elf, Hobbit, Humpty Dumpty, Little Globe, and Pixie: Just a few of the named varieties of super tight, white spruce micro-miniatures. These selections all grow very slowly, are slightly less hardy, and are usually even more susceptible to spider mites. It might be fun to try one or two, but these minis are definitely not forest material.

Jean’s Dilly (pronounced “John” for Jean Iseli, founder of Iseli Nursery, Boring, Oregon): A fine choice for garden railroaders because it grows about half as fast as the standard Alberta. The growth habit is denser and even more formal, as well. Try a mix of Jean’s Dilly and standard Alberta trees in mixed-conifer forests.

Rainbow’s End: Similar in all ways to the standard Alberta, except the new growth (usually the second flush) pushes out a creamy yellow. As the new needles “harden off,” the yellow fades and the tree becomes identical in form and color to its cousin.

Sander’s Blue, Arneson’s Blue Variegated, and other blue forms: These and other named “blue” spruce are available, but the blue-ness is variable and the trees all tend to revert to green with age. Wouldn’t it be great to have truly blue Alberta spruces for our Rocky Mountain railway lines!