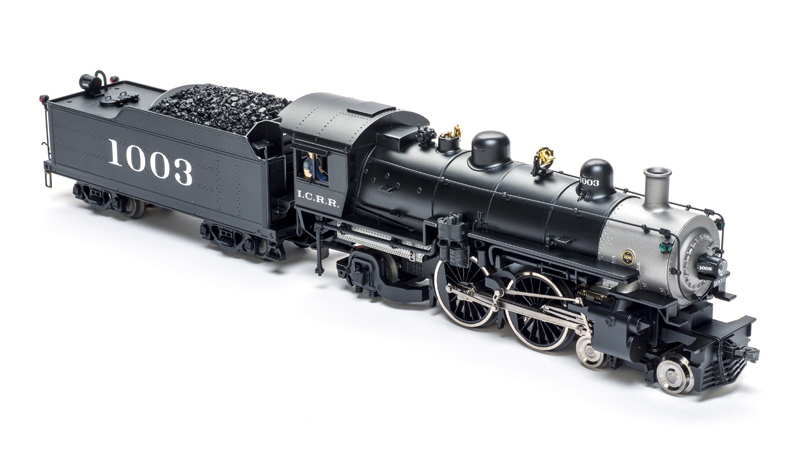 I’m impressed with this Lionel steamer.

The first thing I learned was that the Illinois Central did indeed have a small number of 4-4-2s in its fleet. Dating from the early 1900s, the high-stepping passenger locomotives did what Atlantics were known for – pulling fast passenger trains. As they grew older, a small number were converted to freight engines.

Opening the box
As amazing as this O gauge locomotive is, what first caught my eye was the silky smooth gray-and-black paint scheme. The gray smokebox is just the right color to accentuate the headlight and number boards, builder’s plate, and classification lights. The tender also has 3-lens marker lamps.

The handrails run from the cab along the boiler, then gently curve down and around the smokebox. The gray paint also accents the deep, clean casting of the smokebox rivets and hinges.

It’s interesting that the pipes to the steam chests start out gray, but below the running board they match the black of the pilot, boiler, cab, and tender. I thought this was a nice cosmetic detail.

At first glance the pilot may appear solid, but it does have see-through slats and a scale-size front coupler. All the walking surfaces, such as the pilot and catwalk, are smooth.

The riveting ends with the smokebox, and the key boiler feature is the bands around it. Topside details include a tall smokestack, steam and sand domes, a power generator, and a whistle.

Near the catwalk you’ll find the air compressors and cast-in piping. Below them, the pilot wheels, running gear, and wheel tires are natural metal.
The cab has riveting on the roof, and at their stations are two crew figures. The flickering firebox glow looks great at slow speeds. The backhead gauges have painted faces, which make the engine’s “control center” look more authentic. Below the cab, the firebox is painted gray.

The locomotive and tender are connected with a wireless drawbar. This junction is considerably smaller than those used just a few years back. The tender has steps on all four corners, and you’ll find nice rivet detail on the sides and top. The coal bunker is filled with chunk-style coal, which is more realistic than the old hobby standard of a cast-in load.

The water hatch has two scale handles, but a finger can raise the lid and find a manual volume control. Just behind this is a backup light with the engine numbers on the side. Lighting is directional, so when the locomotive is in reverse, the backup light comes on.

The rear has a remote coupler and a simulated uncoupling lever. There are grabirons to help crewmen hoist themselves up to the ladder. Once on top, they can check the light or pour water into the tank. The marker lights on the tender look brilliant in bright light, but appear to be superb warning devices in the dark!

On the test track
A scale model, the Atlantic has a wonderfully compact footprint: 16½ inches coupler to coupler. Don’t judge performance by the size; this is a champ.

The first thing you have to decide is how you want to run the locomotive. There are lots of options.

The Atlantic can be run in conventional mode. It can also be run with Lionel’s Legacy command system, or its predecessor, TrainMaster Command Control. You can also add it to the LionChief Universal Remote, or use the app on your tablet or cell phone.

The model performed well regardless of how it was controlled. My personal favorite controls were the Universal remote and the iPhone app. I think the latter is the easiest entry point for doing what most of us do – start and stop, blow the horn or whistle, ring the bell, and uncouple cars.

The startup sounds are great, and the steady background noises of the steam hiss, ker-thunks, and crew conversation are appealing. The engine starts to move forward in a fluid motion, so unlike our beloved Lionel steamers of the 1950s.

The wow factor for the sound system was best detected when the model was creeping along. You could hear the tortured sound of steel against steel, wheels, springs, and joints of the engine and tender that didn’t really want to move. I ended up grabbing several folks passing the workshop and saying, “Hey, you’ve gotta hear this.”

The sound and smoke unit are synchronized. The matching chuffs begin slowly, chuff … chuff … chuff, each with a matching puff of smoke. Listening to the sound and watching the running gear move made me smile. As speed picked up, the chuff-puff rates kept up with each other.

The whistle was robust and provided a blast that matched your press of the button – no standardized whistle here.

All things considered, the locomotive looks great, has ample detailing, and features superb sound and smoke. The days of buying a sharp-looking locomotive and just letting it sit on a shelf are gone. Further, it would be a crime to let a locomotive like this sit around getting dusty.

Oh, and a note to Carl Johnson, Kent made the right choice!