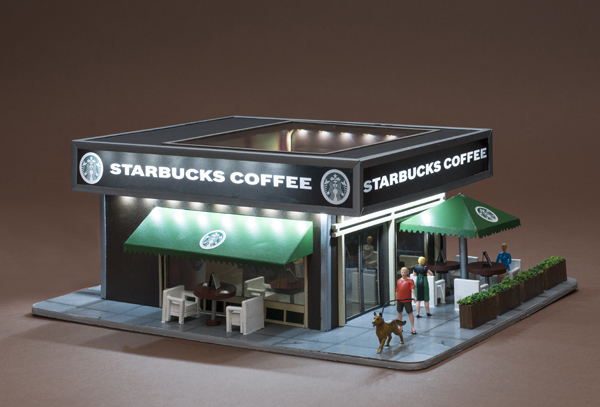 O gauge layout owners seem to fall into three general groups. The first is roughly “anything goes,” which is any type of train from prewar tinplate streamliners to today’s feature-laden engines from Lionel, MTH, or Williams.

The second broad group is the steam-diesel transition era, spanning the 1930s through the early 1960s. The remaining group is a bit more hardcore. On their layouts a GP40 is practically an old-timer, and the slogan for their railroads might as well be “Route of the Latest and Greatest.” The new Starbucks store from home-improvement chain Menards will probably be a prime candidate for a splash of “today” for both the “anything-goes” and the modernists!

Starbucks stores come in a seemingly infinite number of configurations. Within about three miles of my office you can find one built in an old quick-lube shop, another in a re-built Burger King, a shop slipped into a vacant spot in a strip mall, and another inside a Target store. So one style does not fit all!

The Menards Starbucks has a relatively compact footprint (roughly 8 x11 inches) and represents a brand easily recognized by any visitor to your model railroad. Its a good addition for the 1:48 scale residents to get a caffeine fix!

The building has an engineered wood composite base with cement block texture, such as seams and cracks. The Starbucks logo is so well illuminated it will stand out even when the room lights are on! The exterior detail I fancied most was the Starbucks green canopy and umbrella on the outside of the shop.

For those nice summer days there are two tables, chairs, and an umbrella at the front, and a table with two chairs beneath the side canopy. There are little easels for menus on each table. There is one seated customer outside and a barista nearby. You’ll also find Jack the German Shepherd on a leash, being walked past the store.

Menards often includes a bit of a surprise, in that many of its structures have see-through ceilings. As a result, you don’t just have a building with exterior detailing but also things you can spot on the inside. The interior lighting is superb. Easy-to-see details include three round tables, six chairs, three customers (two seated), and a barista behind a service counter. There is a representation of an espresso machine on the counter, and I was a bit surprised at the very nice wood texture in the countertop. This was my favorite interior detail because the counter surface looked so authentic.

Menards is improving the quality of life in your Traintown with the release of the no. 279-4325 Starbucks coffee shop. This O gauge building has lenty of interior and exterior detailing to note, and the LED lighting package is superb. It will look right at home on any 1990s-plus O gauge layout.