There’s a lot of new high-end O gauge offerings and a few in traditional size, too

The Lionel 2023 Big Book catalog is out. I just had a quick flip through it and here are my first impressions.

I’ll tell you right off, this isn’t an exhaustive treatment and I can’t cover everything. Nor will you find any mention of the prices of these things.

As I’m frequently inclined to say, these are my opinions and they’re worth exactly what you paid for them. You’re going to get some overall conjecture and some of my personal whims.

Get your eggs and overripe fruit ready to fling at me, and here we go…

What actually jumped out at me was what wasn’t up front – the company’s new Cab 3 control system. Yes, I know it’s been toward the front of the last few catalogs and it’s expected to be delivered this year. but to feels like to me the company is kind of saying, “Uh yeah, nothing to see here,” by burying it on page 226. The Universal Remote appears before the Cab 3, prominently at the start of the O Traditional section.

I’ll also say this up front: Those of you looking for new offerings in S gauge are going to be pretty disappointed. There’s a new Christmas boxcar and a Polar Express flatcar with trailers. Yawn.

But let’s get the low-hanging fruit out of the way. The Vision Line Big Boy 4-8-8-4 was announced last fall, and it looks spectacular. You can get it in several road numbers and any iteration you like, plus a train of streamlined Union Pacific cars. Plenty of “wow factor” here.

Gotta say, I like the Vision Line sound cars. We saw so-equipped stockcars in the 2022 Big Book and there’s a new round of them in 3-packs for ’23. The reefers are pretty cool, too; they play a loading-icing-unloading sequence. All will look great in dedicated blocks.

The Legacy Dreyfuss J3 Hudson, in light gray, with disc drivers and a striped tender. Now that’s art. If our definitions of the subject don’t match, there are other versions to choose from. The accompanying matching 20th Century Limited passenger car offerings just put it over the top.

If you are a fan of Decapods, this is your year. You can get these Legacy steamers in two flavors: the lighter “Russian” style, or the Pennsy I1 “Hippo.” The latter come with standard or “coast-to-coast” tenders.

Nice detail on the Legacy “late production” NW2. At first, I thought it might just be an SW7 shell, but a close look revealed the half-height front radiator that stuck with the NW2 throughout its production. The distinct slant-flat shape of the hood in front of the cab did not.

The GP20 is one of those love-it-or-hate-it models. Lionel’s roadname-specific detailing really shows in the run, though. I spotted a roof-mounted bell, dynamic brakes, winterization hatch, hood-mounted horns, and modern antennas on various versions. Well done.

Just a few quick takes on these:

Not a big fan of Camelback steamers but it really works for the Legacy Lehigh Valley Camelback set. With the 4-wheel caboose the outfit is almost – dare I say – cute.

Chances are it will have a limited audience, but the Union RR Hot Metal Train set is a great combination of cars.

Ditto with reefers for the Santa Fe Fast Fruit Set. The 4-8-4 is kind of “meh” to me but keep tacking those orange reefers on. Go ahead, don’t be shy. More. Forty? Fifty?

The one that got me was the Rock Island Quad Cities Rocket Set. Being a fan of The Rock, especially in its colorful later years, this little passenger train is great. Maybe nicer than what the railroad could actually muster toward the end of passenger service.

An “All new product” run of Mikados. I have a Lionel model from a few years ago that’s a favorite; I’ll be curious when these come out to put them side-by-side and compare.

Even though they are kind of plain and in the real world they replaced actual passenger trains, there’s something neat about Budd RDCs. I like that these come in singles and powered-unpowered pairs. Next run can we get them in Missouri-Kansas-Texas and Rock Island, please?

Some of the Disney 100 products look great. I like the black-and-white boxcars and the Mickey Mouse and Minnie Mouse Handcar.

If whimsy is your thing, the Willy Wonka & the Chocolate Factory items are pretty sweet looking. See what I did there? But seriously, there’s a transparent tank car full of “Everlasting Gobstopper” material. Veruca Salt: But daddy, I want a train! Mr. Salt: “Yes, Veruca darling.” 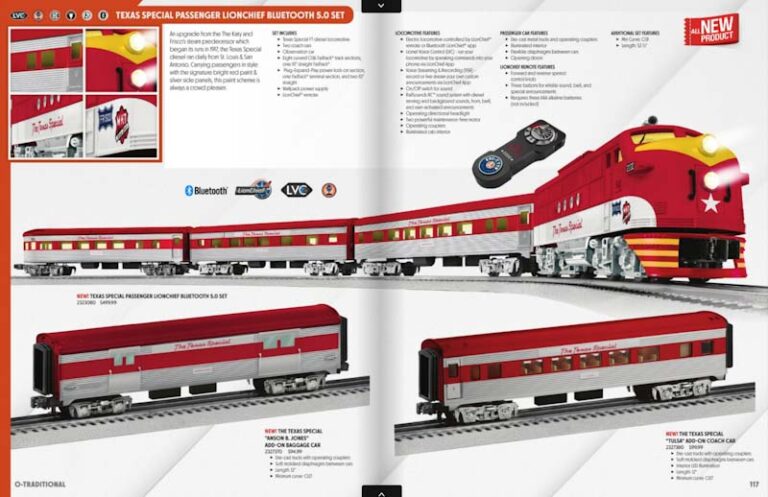 Texas Special Passenger LionChief Bluetooth 5.0 set: Love it, love it, love it. I do have a request, though. It’s nice to be able to get add-on cars to go with this and other sets like it; how about some unpowered FTs, too? The longer trains would look great behind an A-A set.

And following along those lines nice to see some individual powered FTs offered along with 2-8-0s. Both are great Traditional-sized power for compact layouts.

We’ll have more on the catalog soon in Bob’s Train Box and through our Product Reviews.