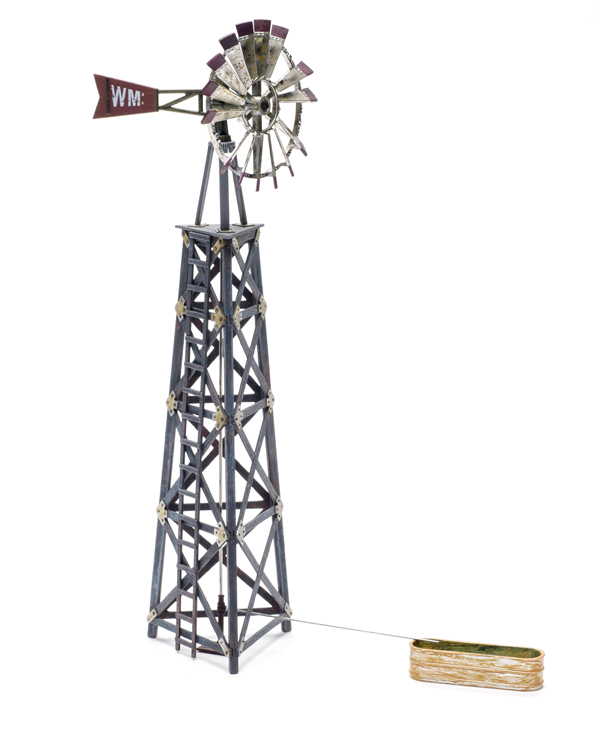 More than 40 years ago, I was driving cross-country through the Southwest. The view from the interstate highway was spectacular. When the Southern Pacific main line was visible, you could see as many as three trains in the distance all several blocks behind the other.

There were a few odd spots where a boxcar or tank car had been parked in the middle of nowhere. The only exception to this whole lot of nothing I was seeing was a notable number of forlorn trackside cattle-loading ramps. No houses, no cows, no stations. Nothing. Except, that is, for a nearby windmill.

The Woodland Scenics windmill is the answer to anyone with a small farm or farmhouse, a field with cows, or a barren field with an abandoned cattle station.

The windmill itself is a compact structure measuring about 9 inches tall and 2 inches wide at its triangular base. The beams have wood texture and “steel” reinforcements and bolts as critical joints.

The turbine’s blade and fin assembly has three supports on a topside platform. A ladder for maintenance runs up one side to the top. The windmill rotates 360 degrees, and the blades are functional and rotate. The rear fin is rigid.

A “pipe” runs up the center of the structure and arises from a rep pipe and a wood floor that must surely cover the wellhead! An additional pipe runs out at a 90-degree angle from the structure. This supplies a round wood cattle trough.

There is a third piece in the set – a hay rack for storing cattle feed.

If you have about a foot of green or brown real estate (and a few O gauge cows), plop this windmill down and you have a ready-made story to tell.

The “Old” version of the windmill is definitely “distressed,” with rusty and missing turbine blades. The detail pieces are nicely varied – a hand pump, a small trough, and two oblong stock tanks to be fed from the well. You could put both of the windmills together on the same farm, and it wouldn’t be a duplication – new has replaced the old.

These clever structures are well made and compact and will add greatly to the story of your railroad.