You don't want to miss this overlooked player

When Classic Toy Trains Editor Hal Miller told me next up for review was a 4-6-0 steam locomotive, I remember scrunching up my eyebrows. My first thought was that it would be a frilly Ten-Wheeler worthy of an episode of the old Petticoat Junction or Gunsmoke TV series. I mean the wheel arrangement arrived in the U.S. in 1847, so my first mental image was of something with a diamond- or maybe cabbage smokestack from what I consider the boring phase of American railroading.

Hundreds of Ten-Wheelers were built for North American railroads and were found to be solid, utilitarian locomotives good for freight or passenger service. They were so plentiful that a good number of them have been preserved.

I did a quick check and found nearly 80 standard gauge 4-6-0s still exist (most in museums or public displays). That number grows larger if you include narrow gauge engines. Of note, our test sample, Soo Line no. 2645, still exists. The actual locomotive is one of four of the type located at the Mid-Continent Railway Museum in North Freedom, Wis.

When I opened the box, I actually did exclaim, “Oh, my!” The Lionel O gauge model looked at first impression to be a fair rendition of a New York Central F12- class 4-6-0, built in the early 1900s. Some were in branchline service into the early 1950s. But rest assured, there is no Central- bias here; it’s simply a clean, functional, and utilitarian design.

There were no frills and no tourist railroading gewgaws – just a nice, industrial looking appearance that would fit in well from the 1930s to the end of steam!

Checking out the details

Up front, the pilot has a non-functional scale coupler mounted above the pilot; a chain attaches it to the uncoupler arm. The pilot deck has two supports connecting to the smokebox, and the surface has a cast-in safety tread pattern.

The smokebox has deep rivet texture, and the access hatch has good bolt detail. There’s a nifty headlight in the center of the smokebox with illuminated number boards on the sides and non-illuminated ones above and below.

On top of the smokebox are illuminated classification lights and add-on handrails running the length of the boiler. You may not notice it at first, but both sides of the smokebox have a round builder’s plate. Many models that have this detail tint it in a contrasting color. This model’s plate is gray, matching the smokebox. The boiler is painted black.

Along the top of the boiler is a sand dome with cast-in lines running toward the track. Next are an add-on bell, a sand dome, and pop-off valves. The sides have boiler bands and cast-in steps. The running boards are smooth. Below them on the engineer’s side, you’ll find the main air reservoir, while on the fireman’s side you’ll see add-on air compressors.

The firebox (where the magic happens in a steam engine) is just ahead of the cab and below the boiler; it’s painted gray. There’s ample rivet detail cast into it.

The cab is a gem. It dawned on me that some of the recent O gauge steamers I’ve operated have tenders so large, and coupled so close to the cab that some of the interior details were hard to see. Not so with this Ten-Wheeler.

The cab has front and rear windows for the crew. The “office” is illuminated, and you’ll observe two crew figures at their posts. There are two “closed” plastic fourpane windows and “open” windows by both crewmen. There are add-on wire grab irons on the corners of the cab.

The locomotive backhead is terrific: The gauge faces are painted white, while the valve handles are painted red. There are twin firebox doors. When the model is powered up, you get a nice flickering firebox glow. The tender is low enough that you can see and enjoy these details when the engine is standing still or running by.

The tender is a compact four-axle model. It has handrails on all four corners and a cast-in coal load. There’s a nonopening water hatch behind the coal bunker. A continuous handrail runs around the top of the deck. The rear of the tender has an operating coupler just below the rear deck. There’s an add-on ladder as well as twin grab irons on the deck. The tender has no backup light.

The paint and decoration are expertly applied. The finish is satin soft, and the Soo Line’s so-called dollar sign herald and assorted numbers, such as the “8,000 GALS.,” on the tender are clear and crisp.

After setting up the locomotive on the track I connected it to an 18-car freight. It dug right in and had such a steady speed I could time the laps and it would match every time.

I did notice one quirk using the app. Reaction time was about a second or two longer than I had recently experienced. This wasn’t really a problem, but I did have a freight car coupler failure and the engine took off on an O-72 curve. It also took a tad longer to begin to slow than I’d have hoped. Hey, the engine is a loaner, so I didn’t want it to leave the table the hard way!

I enjoy the creaking metal sounds I got when the model was running at low speeds. You really get the idea this is a piece of machinery that consumes a bit of itself with each run. Very cool. The performance numbers were very good. Our low speed was 4.1 scale miles per hour in command mode and 7.4 smph with conventional throttle control. The high-speed was 52.3 smph. The range is good for either freight or passenger traffic on your line! 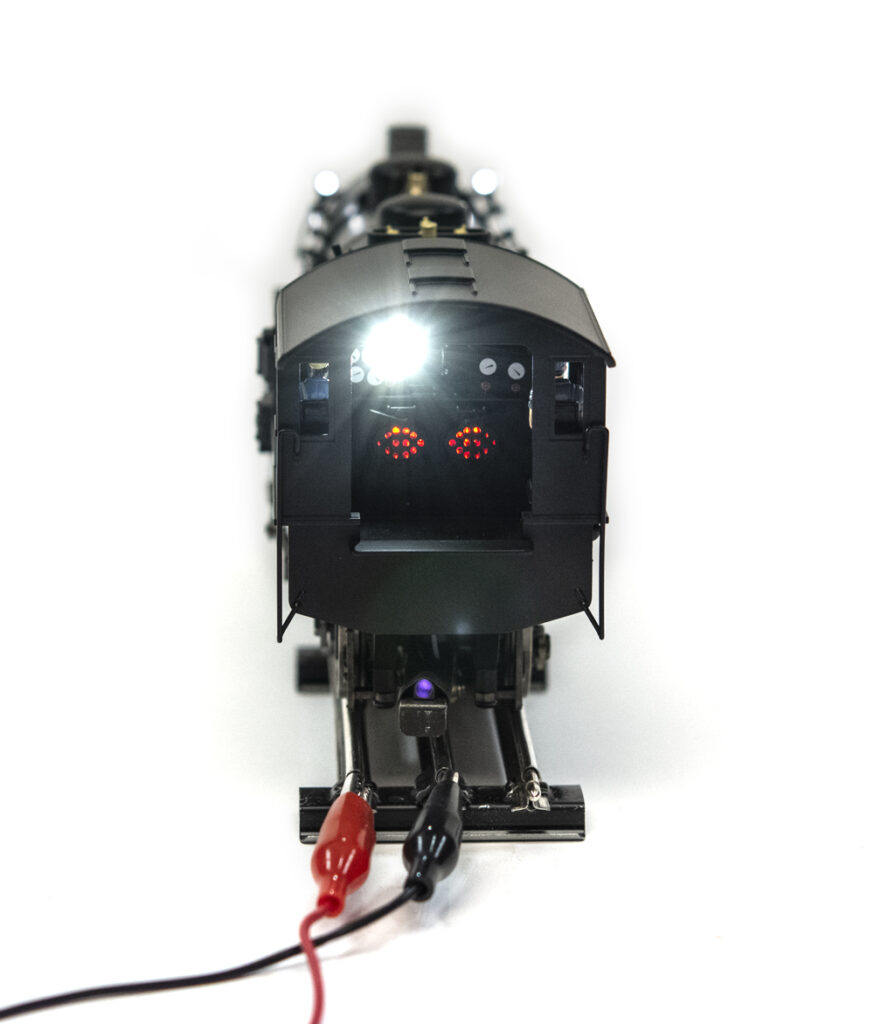 One for the books

There you have it! A historic wheel arrangement (you may recall, the ill-fated Casey Jones commanded a 4-6-0) in its most “modern” incarnation that served until the end of steam. The choice of liveries available should appeal to operators in any region!