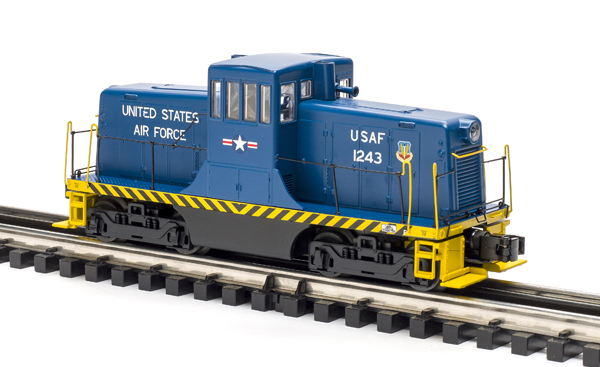 The General Electric 44-tonner is an iconic locomotive. It has stood the test of time whether it was used in steel plants, railroad back shops, or by short lines on weed-covered tracks.

Developed as a way to offer railroads a light switcher with a one-man crew (45 tons-plus required a fireman), nearly 400 44-ton switchers were made by General Electric between 1940 and 1953. Many were for the U.S. military and saw service around the globe.

The military’s railroad relationship dates back to the Civil War. Since then, most major military installations have had some sort of rail link, whether to deliver munitions, bulk supplies, or construction materials. Most Air Force bases had a rail connection even in later years, even if it was just to deliver coal for a steam plant.

For the most part, the Air Force divested itself of its locomotive fleet starting in the 1980s. I was on temporary duty at Hill Air Force Base in northern Utah back in the late 1980s and I had to travel to the co-located Ogden Air Logistics Center to observe how training was being conducted.

As I pulled up to the site I saw a small rail yard filled with dozens of center cabs, conventional cabs, switchers large and small. All in a sadly faded Air Force blue. And me, without a camera or screwdriver, if you know what I mean! A few may have made it to museums, but I suspect were scrapped.

In better news, many 44-tonners have been preserved and a few occasionally see operation with museums and tourist railroads.

Unlike the two previous models, this stout little fellow has a die-cast metal shell. I’m always impressed when I see smooth curving surfaces in metal die-casting. The cab roof has a gentle curve. Both the front and rear engine compartments slant forward.

The pilots and sides have yellow safety paint. The pilots have brakeman steps, a simulated uncoupler arm, and grab irons on the frame.

The decks have diamond safety tread pattern. Coil couplers, for remote operation, are on each truck. Both ends of the engine have deeply grooved louvers. There are safety yellow grab irons just below each headlight.

The body has plenty of cast-in door and hinge detail, and roof has prototypical latch detail for access to the prime mover. There are scale handrails on both sides of the locomotive. The main rails are painted dark blue, while the corner grabs are safety yellow.

Paint and decoration are first rate. The blue is indeed a good copy of the Air Force’s blue vehicle color (at least in my day). The sides show both “United States Air Force” and “USAF” as well as the engine number. The cab sides have the Air Force roundel icon.

On the test track
I ran the engine both conventionally and using the MTH Wi-Fi interface on my phone. Response to commands was good in using either method. Horns hooted, bells rung, and couplers uncoupled.

The 44-tonner was a champ pulling a short train of 10 or 12 postwar cars that might not have been lubricated in a decade. The motors might be small, but they pack some punch. The die-cast metal shell and frame helps the engine reach a drawbar pull of 15½ ounces.

The low speeds were excellent, being 2 scale mph in command mode and 4.3 scale mph in conventional mode. My high-speed average of 65.4 was probably faster than any hot-rod 44-tonner actually hit.

The ProtoSound 3.0 system sounded very good and the volume range control ran from silent to annoyingly loud! The engine and event sounds were clear and distinct and horn and bell functions were suitably cautionary in warning.

The GE 44-ton diesel from MTH is a fun little locomotive to operate. You won’t be pulling a train of container cars with it, but for handful of cars, this is just the right size and capability.