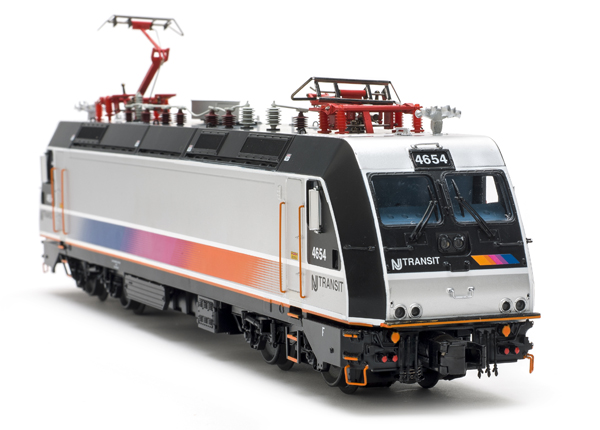 Electric railways have always been an afterthought in the world of North American locomotive design. There are simply not enough route-miles of electrified trackage to nurture a full-time manufacturing base for locomotives. Accordingly, the look of North America’s electric locomotive fleet tends to suggest roots in Stockholm or Berlin designs more than Boise or Omaha.

So when NJ Transit began to search for new electric power to replace the venerable ALP-44 “Toaster” fleet, it looked across the pond. Bombardier offered a version of the class 101 electric, which was then in service with the German railways.

Out of the box
The most distinctive element of the design of our O gauge replica from MTH may be the double cabs. American practice has, for the most part, been to strap two locomotives together with cabs facing opposite direction. Dual cabs are practical for changing direction of operation, an attribute that’s particularly handy in commuter service.

The noses don’t look like any standard American passenger power, diesel or electric. They are not bulldog-faced or torpedo-like. The cabs have a gentle up and inward curve from the frame. The front end has steps, electrical receptacles (painted red), and airbrake hoses, with a nice narrow front platform with safety tread.

The nose has four low-sitting running ditch and two side-by-side headlights. There are two wire steps below the headlights, wire grab irons on either side, and another grab iron between the cab windows. There are long wiper arms for the blades to clean the wide and deep windows. Just above them there is a number board and a grab iron just above that.

The sides are flat, except for an inward angle running along the front and rooftop from front to rear. In the angled zone there are extra grab irons situated to support a crewman climbing up from the end frame steps. There are also louvers up top, complete with small warning tags.

The unit has four cab doors and add-on grab irons along with steps with painted safety accents. The cab windows have real mirrors. The cab itself has a very tall dashboard, which makes it tough to see the interior. During testing I didn’t see any illumination inside, but I did find one online reference stating there is no lighting in the actual locomotive’s cab beyond the control panel, so this may be prototypical.

The roofline is very busy. Each end has a silver-colored horn above the cab. The pantographs are just behind the cabs and have a robust array of insulators and wire connections.

There are two topside louvers or screens; and there is what appears to be a roof-mounted HVAC unit near the rear of the unit (yes, there is an “F” for front on the frame!).

On the test track
This O gauge Premier line locomotive is another fun-to-run model from MTH. The pantographs raise or lower, depending on direction, and are the most distinctive operational feature of this model. Run forward and the opposite array is raised. Change directions and it reverts to the prior height. This is a cool feature!

One of the pantographs on our test sample didn’t lower as far as the other one did. While noticeable, it wasn’t a major issue for me (or anyone passing the test track). If you have tunnels or overhead obstacles on your layout, take your first run or two around the track slowly to check that it won’t touch.

The locomotive was very responsive to commands; and the horn and bell are sufficiently loud that only a plastic trackside figure could miss them! While the sound system does suggest the sort of transformer humming typical of electric locomotives, there is also a fairly loud whine. I presume this is the sound the real locomotives make and I suspect it’s from the high-powered blowers used to cool the electrical components. So this sound system is not as milquetoast as, say, a sound-equipped GG1 would be.

Per MTH, this model requires O-72 track, as in “Don’t buy this if your layout curves are tighter than O-72!”

Our command-mode low speed was 2.1 scale mph with the conventional-control low speed being 4.2 smph. Our high speed was 97 smph (and I was afraid it would become airborne on a curve)! Drawbar pull measured 1 pound, 2 ounces.

This is a terrific model of a contemporary electric locomotive. Even if you reside miles away from NJ Transit’s service area, you can probably talk yourself into buying one as a “demonstrator” to test it on your own railroad’s electric lines.