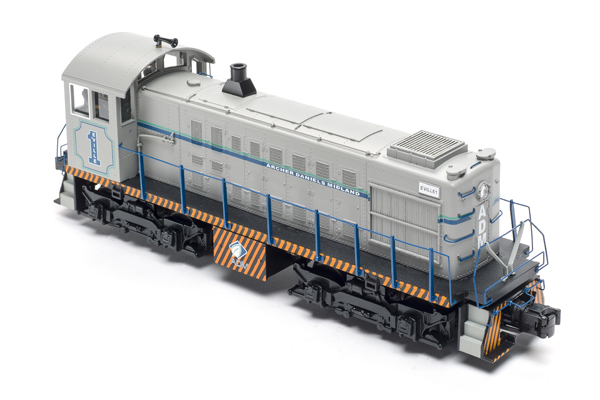 The American Locomotive Co. (Alco for short) produced a number of significant locomotives during the steam and diesel eras, but its diesel yard switchers likely wouldn’t appear on anyone’s top 10 list. Not that they were bad designs; they seemed to be everywhere. But who paid attention to common little switchers?

I happen to like Alco switchers, thanks to the Baltimore & Ohio yard in Hamilton, Ohio. The once-bustling facility had a handful of them and kept them busy moving steel loads from Armco and auto frames from Fisher Body. I took my only cab ride in an Alco switcher as a boy, though the family reminds me I cried so much the crew had to hand me back to my dad!

Nearly 1,500 Alco S-2s were built for 44 original owners from 1940 to 1950. Sales of the 1,000-horsepower locomotive benefited from Alco’s prominence in switcher production. Proven by heavy wartime transportation requirements, the locomotives were in demand in the secondary market by industries and shortline railways and had a fairly robust lifespan. Approximately 60 have been preserved, with as many as another 20 still seeing regular service.

Opening the box
The road name was the big standout for me when I opened the packaging. The paint scheme is a nice change from the usual railroad names. ADM is a giant in agri-business, having locations nationwide, and this Alco will look right at home at a city or harbor grain terminal or out in farm country.
As pleasing as the colors look, I was struck by the large numeral “1” on the cab with the lettering “E’ville” placed vertically inside it. My first impression: This is a locomotive equivalent of aircraft nose art! Truly, an unusual level of personalization for a locomotive. The “E’ville 1” is replicated on the number boards as well. Very cool, indeed.

The locomotive’s nose has some nice, deep rivet detail running around the front access hatch and headlight. The headlight frame also has cast-in rivet detail. There is a long add-on conduit on one side of the shell and grab irons running up the sides and front.

The body is painted gray, while the frame has orange and black “zebra” safety stripes along the side. The handrails and grab irons are blue, and the body has a blue accent with “Archer Daniels Midland” inside the stripe. There are also dark blue and teal accent stripes on the nose, seeming to point at the white ADM lettering below the headlight. There is a very nice corporate logo in the middle of the fuel tank.

There are numerous doors, hatches, and louvers on the sides of the body molded in a nice, deep texture. Just below the number boards are two large radiator shutter areas.

Topside, just behind the front headlight, you’ll find a grab iron and two sand filler box lids. Behind them is a see-through barrier; there are cast-in fan blades beneath it. Just behind that is the engine compartment, and there are add-on lift rings bracketing it. Alco offered many stack variations, but this model has what I’ve always thought of as the “typical” Alco exhaust stack.

The crew in the cab is facing ahead for long-hood-forward operation. The cab has visible controls in front of each crew member and controls and instruments on the back of the engine compartment. The cab light and large windows make this detail easy to spot.

The painting and decoration were great. The add-on details were applied skillfully.

On the test track
This small yet powerful locomotive was a pleasure to run. Motor operation was smooth; it had good traction and pulling power; and it could be a little speedster. Our command-mode low-speed average 2 scale miles per hour, while the conventional mode number was 3.5 scale miles per hour.

The high-speed average was 66.1 scale miles per hour. This is probably faster than any S-2 ever went, unless it was in a freight train being hauled someplace else! The locomotive’s drawbar pull measured an even 1 pound.

The sound system was suitably cranky upon startup, with wheezes and cranking sounds and finally a rhythmic diesel idle sound.

The MTH Alco S-2 is a good model of a familiar face in railroading. The fact that nearly 80 years later it can still be found in service makes this a good candidate for operators modeling the steam-to diesel years as well as hobbyists with the latest and greatest, but perhaps an old-school industry or two on the line.