This model is as solid as the real thing 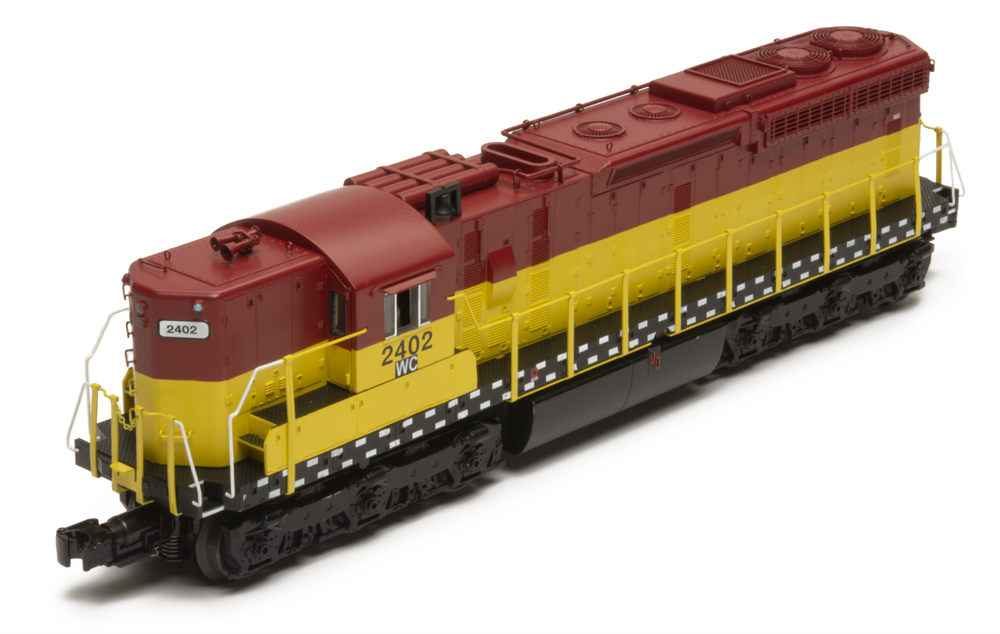 When I found out that the next locomotive for us to test and review was an MTH O gauge SD24 road diesel, my response was pretty much “Huh?” I needed to track down my old Diesel Spotter’s Guide for sure! I was familiar with SD7s and SD9s, but the SD24 escaped my memory!

Four-axle units were exceptionally popular in the early days of dieselization. However, there were places, such as on branch lines, where distributing locomotive weight over more axles could be handy. A third axle per truck also improved traction, so while F units and Geeps ruled the day, their six-axle counterparts carved out a niche.

The turbocharged 2,400-hp SD24 was built from 1958 to 1963 with a fairly modest production total of 179 plus 45 cabless B units. Original owners included the Atchison, Topeka & Santa Fe; Chicago, Burlington & Quincy; Southern Ry.; and Union Pacific. To own an SD24 put you in a rather exclusive club!

Beginning in the 1970s, several railroads rebuilt and upgraded their SD24s. A number of units, like Wisconsin Central no. 2402, had second careers on short lines or regional carriers.

The locomotive makes a good impression from the start. There’s lots of detail, including yellow handrails with white accents on the corners. It also has illuminated number boards, headlights, and classification lights, with grab irons running up the engineer’s side of the nose. A horn is located just ahead of the cab roof.

The bell is a surprise. You’ll find it mounted sideways on the fireman’s side of the cab, looking like somebody just took it off a steam locomotive.

The most obvious differences with the GP series are under the frame and on the roof. Right behind the cab you’ll see so-called “torpedo tubes.” They held reserve air for the braking system. The tanks were placed on top to allow for a larger fuel tank. Behind the air tanks is the exhaust for the turbocharger; that’s where the smoke unit does its thing.

Next are dynamic brake fans, followed by three cooling fans, one of which is covered by a winterization cover. Snaking its way around the fans is the simulated piping for the air tanks. Lift rings also dot the various top panels.

At the rear, you’ll find marker lights, headlights, and illuminated number boards. Add-on ladders rise up to the number boards, and you’ll find grab irons by the lights as well as the roof.

The sides of the unit have simulated dynamic brake grids and see-through ventilation screens. There are also cast-in louvers, doors, hinges, and latches; the battery boxes under the cab are very well done.

Paint and decoration are superb. The livery was applied when the unit belonged to the Fox River Valley Railroad, an ill-fated Wisconsin short line cobbled together out of 200-odd miles of former Chicago & North Western track.

The FRV and neighboring Green Bay & Western were absorbed by the Wisconsin Central, giving the unit its “WC” identifier on the cab side. The WC eventually became part of Canadian National.

An interesting design element is the alternating silver striping along the frame that simulates reflective safety marking. The locomotive also comes with plows for the front and rear, which we’ll leave to the new owner to apply.

Firing up the model, you’ll hear a robust EMD diesel prime mover. The horn and bell are loud and clear, and the smoke unit fogged up my basement in short order.

The model also has crew chatter and the odd clanks and thunks that make today’s sound systems so neat.

Response to commands was near instantaneous, although in one backing move I was a bit slow in issuing the right directional command and things went bump in the daylight.

The SD24 handed all loads very well. This included a passenger train that began at a nearly 4-amp load before the O gauge locomotive started up!

Low speeds were well below 10 scale miles per hour. The drawbar pull was a solid 1 pound, 8 ounces.

The MTH SD24 may look like a Geep, but the six axles, good performance, and interesting liveries will make this a workhorse on your railroad.