Home / How To / Timeless Classics / Minitoys no. M-54 road signs

These details last forever if the paint stays fresh 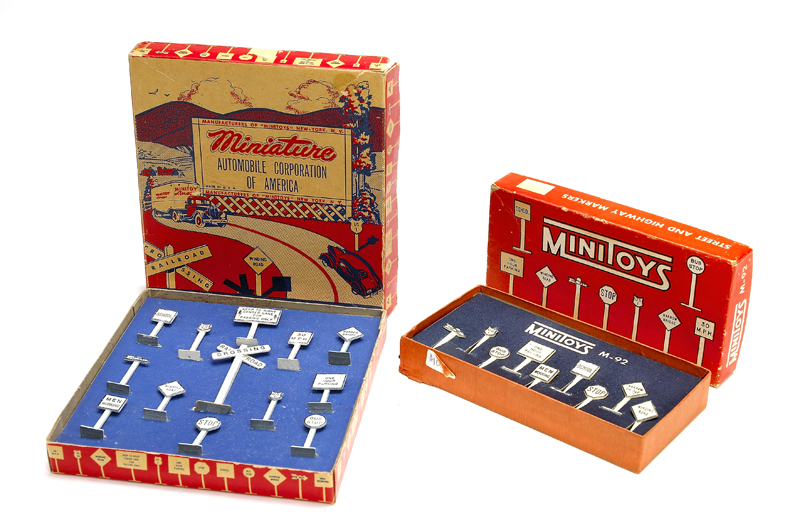 Youngsters who wanted their layout to look more realistic, even if that railroad amounted to nothing more than a circle of track on the floor, understood that details were the key. They might save up to buy a block signal or girder bridge. Streetlights and highway and railroad signs were also critical components.

Manufacturers and store owners in the toy train business reached the same conclusion, especially in the years after World War II, when so many folks were trying to squeeze their way into the market and grab a few dollars. Several small companies sprouted up in the late 1940s and early ’50s to produce lights, billboards, figures, and signs for kids eager to expand their O or S gauge layouts.

The fact that Lionel already sold an array of street lamps and railroad signs hardly deterred these hard-charging entrepreneurs. Instead, newcomers in the hobby industry often found ways to carve out a niche and thrive.

Boom times for toy trains
Frank Ajello epitomized the drive and determination that led businessmen across the Northeast and Midwest to leap into the toy train field. Born in 1908, he had dabbled in many enterprises by the time he enlisted in the U.S. Signal Corps during World War II.

After being discharged, Ajello applied what he had learned in the military to repairing household appliances, including electric trains. The demand for his services grew, and Ajello realized that he had finally discovered the pot of gold at the end of his personal rainbow.

Inundated with electric trains to fix, Ajello decided that the time was perfect for striking out on his own. From a portion of an existing store, Hobby-Land, as Ajello named his business, expanded until there was no choice but to open a separate location at 25 Park Row, in the financial district of New York City.

More and more customers walked into Hobby-Land to purchase a new set of Lionel trains or to drop off older models for lubrication. But Ajello dreamed in 1946 and ’47 of much more. Why not produce miniature automobiles that could be operated on special roadways that kids integrated into O and S gauge layouts?

Nothing came of this idea – the A.C. Gilbert Co. and the Lionel Corp. supposedly turned up their noses at it. Undaunted, Ajello adopted more modest goals. He would make the Standard gauge parts and details consumers desired.

Signs and other details
Rather than invest in the machinery and materials necessary to cast small metal parts, Ajello turned to Joseph and Samuel Slonim, who were operating a growing firm known for its models of ships, tanks, and soldiers. Comet Metal Products had made quite a name for itself during the war, and its Authenticast line of details remained popular. Hobby-Land stocked a huge inventory of those items.

Ajello negotiated a deal with the Slonims in the spring of 1947. According to its terms, Comet was going to manufacture the array of metal details he would market under the name of Miniature Automobile Corporation of America. Before long, Ajello shortened the name of his brand to Minatoys and then to Minitoys.

Advertisements in Model Builder and other hobby publications in the late 1940s spelled out what Ajello had in mind. They listed the die-cast metal models of cars, benches, mailboxes, fire hydrants, gasoline pumps, baggage carts, and traffic signals, all neatly painted in appropriate colors, being finished at the Comet plant.

Among the best-selling members of Ajello’s roster were highway signs, notably the no. M-54 set shown here. Signs weren’t new at this time. Lionel had begun making inexpensive sets of five railroad signs, cast in a zinc alloy and painted white with black lettering, in 1940. The no. 308 returned after the war.

Mindful of what Lionel was doing, Ajello developed larger sets that would fit along miniature city streets and rural highways. He packed 13 signs in each decorated box. Now modelers had what they needed to improve the roads paralleling their main lines. In a crowded field, where Lionel and Gilbert competed against Comet, Minitoys, and others, Ajello found a way to come out on top.

Minitoys advertised its sign sets between 1947 and 1952. Values of boxed examples in excellent to like-new condition range from $75 to $125.