Home / How To / Timeless Classics / Lionel’s no. 440N signal bridge 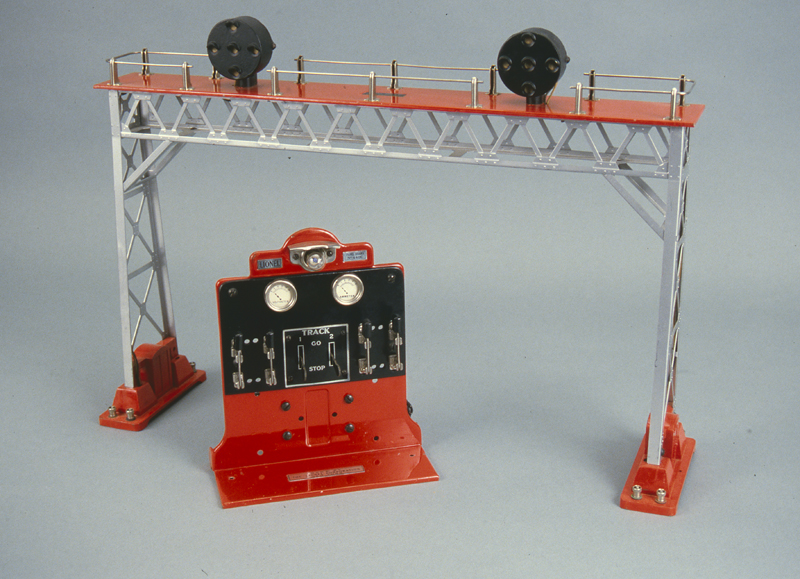 Imagine you’re in midst of designing a three-rail layout with a decidedly toy look. Maybe you want to give a sense of what electric trains were like before plastic models became prevalent. Or perhaps you have in mind an environment in which gaily colored playthings made of tinplated sheet metal predominate.

Wisely, you’ve decided to install accessories that will accentuate the impression of this being like a miniature railroad a boy living between the 1930s and the 1950s might have built. A perfect addition will be a Lionel no. 440N signal bridge.

Introducing the 440N
Lionel first cataloged its signal bridge in 1932. The company used the same accessory for its Standard and O gauge rosters, with the former numbered 440 and the latter designated 0440. The distinction was carried forward through 1935. The following year, Lionel referred to both items as the 440N. The signal bridge remained in the line through 1942.

The central structure of the signal bridge consisted of a pair of vertical supporting trusses fashioned out of strips of painted sheet metal (first a shade of brown Lionel referred to as “Mojave” and more commonly silver). They held up a horizontal truss similar in construction and decoration. The cross braces improved the appearance of the structure, giving it a delicate yet sturdy look.

At the bottom of each of the vertical trusses engineers installed a die-cast metal base consisting of trapezoidal and rectangular boxes. These originally were painted terra cotta; later, Lionel colored them red. It maintained that color on the 440N. Designers used red for the walkway on top of the bridge, after having applied maroon on the initial production of the accessory.

What gave the accessory realism and enjoyment were two die-cast metal round signal heads, each with five operating bulbs, secured to the walkway platform. Two outer bulbs on each head typically were illuminated simultaneously, either in a vertical or a horizontal pattern. Controlling them were the single-pole double-throw switches on the no. 440C panel board.

Minor changes
The operation of the signal bridge remained constant during the 11 years it was cataloged. Decorative details shifted, however. For example, the brass handrails and posts were replaced by nickel ones. Those features, along with red-painted bases and walkways as well as silver horizontal and vertical trusses remained the rule for the 440N (except for some models from 1942 that were painted gray when aluminum/silver paint wasn’t available).

Lionel didn’t return the 440N to its postwar lineup, yet failed to catalog anything like it until the no. 450 black plastic signal bridge made its debut in 1953. However, modified versions of that spectacular prewar accessory were installed on the Lionel Railroad Panorama layout, a massive display filling the company’s showroom in New York City between 1945 and 1948.