Home / How To / Timeless Classics / Lionel’s no. 42 gas turbine switcher 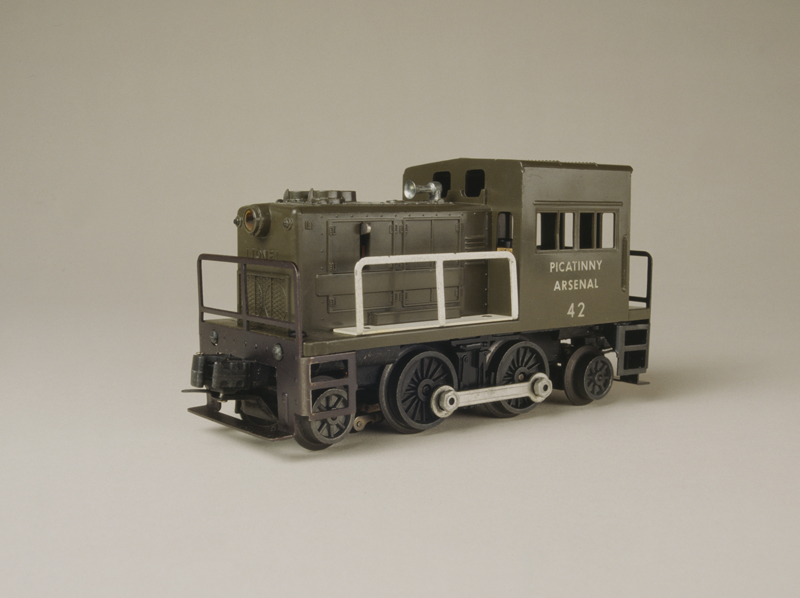 The no. 42 Picatinny Arsenal gas turbine switcher, introduced by Lionel in 1957, continued the breaking of a barrier that had characterized the company’s toy line for nearly 40 years. Not since 1917, when the country had entered World War I, had Lionel blurred the distinction between its toys and military equipment.

Joshua Lionel Cowen had adopted a firm stance on the need to avoid manufacturing “war toys.” Even on the eve of World War II, when Lionel was already producing precision instruments for the armed forces, Cowen refused to bend, unlike his peer and rival, Louis Marx.

Everything changed in 1955, probably because the mood of the country and boys’ tastes in playthings were shifting. To maintain sales and appear as up to date as any toy manufacturer, Lionel started labeling locomotives and rolling stock with the names and insignia of branches of the military. This trend would continue through the remainder of the decade and accelerate during the 1960s.

Creating motorized units
Although the 42 gas turbine should be interpreted as a break with a longstanding tradition at Lionel, it simultaneously represented the next stage in a key trend launched in 1954. Lionel had brought out with great fanfare the first of its motorized units. These compact, self-propelled models were intended to bring in sales from modelers who owned sets and sought to expand their rosters.

The same line of marketing that portrayed signals, bridges, freight loaders, switches, and tunnels as purposeful secondary purchases, now promoted the nos. 50 section gang car, 60 Lionelville trolley, and 41 U.S. Army switcher as great additions to a family’s O or O-27 roster. The idea was always to provide a young model railroader with more that he or she could do to create a three-rail empire.

The choices were ingenious, if fanciful. The gang car derived from maintenance-of-way equipment, and the trolley captured the look of streetcars around America. But the extent to which they duplicated full-size vehicles would have been hard to prove, especially because they seemed like toys.

The 41 followed a different path. Lionel’s designers had explored railroad industry publications to learn about the newest and somewhat exotic items being developed. Among the newcomers was the compact locomotive with a gasoline turbine motor. Its limited power was perfect for maneuvering around a rail yard and handling a few railcars at a time.

You’re in the army!
Lionel’s engineers sought in 1955 to broaden the types of motorized units available when they came up with the 41. Additionally, they hoped to lure those youngsters entranced with the American military and its latest equipment. How simple to heat-stamp “United States Army” across the side of the cab and then add the name and emblem of the Transportation Corps to create a unique piece.

Thus was born the 41 gas turbine switcher. Two years later, Lionel took the same tooling and created the 42, selecting the name because the company had contracts to design precision instruments for the military that were carried out at the Picatinny Arsenal in northern New Jersey, not far from the Lionel factory.

This model, like the 41, had a 2-4-2 wheel arrangement reminiscent of a small steam switcher. It came with an unpainted olive green plastic body shell and white heat-stamped lettering. The side rails and high end rails were chemically blackened. The window struts turned out to be quite delicate, with many units having broken or repaired struts.

Lionel cataloged the 42 gas turbine for one year only. Maybe that’s why this motorized unit is so desirable. After all, other than a three-position reversing unit and knuckle couplers, it has no operating features. No horn or light. Only an ornamental horn on the roof and a headlight lens at each end.

Lionel cataloged the no. 42 Picatinny Arsenal switcher in 1957.