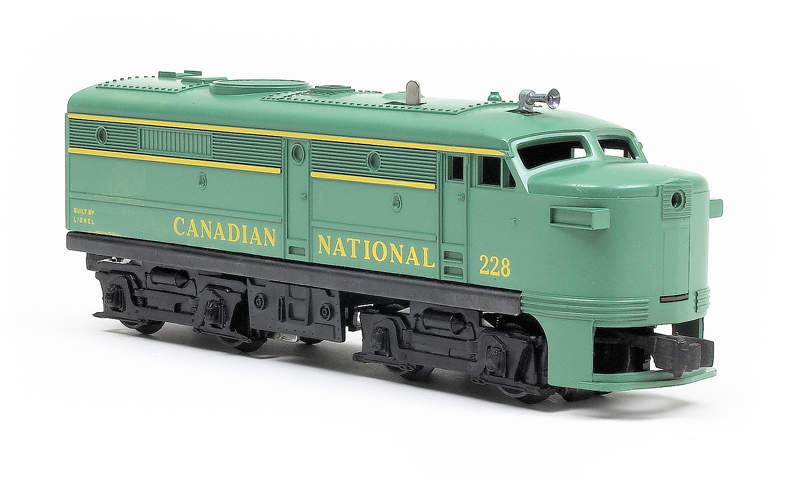 In the years after World War II, Lionel strengthened its presence in Canada by working closely with the heads of its sales office in Toronto. Roy Clarke and his son, William, represented the toy train giant and made sure Lionel had a significant presence in department stores and retail chains across Canada.

Evidence of Lionel’s desire to advance its fortunes in Canada appeared in November of 1955. Chief Engineer Joseph Bonanno contacted the Canadian National and the Canadian Pacific. In his correspondence, Bonanno stated that Lionel was exploring the addition of models of Canadian passenger equipment to its O gauge line and so he requested photos and information.

Files at Lionel’s archives revealed that all subsequent correspondence originated from the offices of the Canadian Pacific. There is nothing to indicate how the Canadian National responded to Bonanno’s appeal.

The CP dispatched drawings, paint diagrams, and a booklet on the Canadian, a transcontinental train that made its maiden trip in 1955. More material arrived at Lionel the next year.

Perhaps because the Canadian Pacific had taken the lead, designers and marketing executives at Lionel paved the way for the introduction of new F3 diesels (no. 2373 A-A units) and matching streamlined passenger cars decorated for the CP. These reached consumers as the no. 2296W Super O outfit in the line cataloged in 1957.

Another effort in 1960
Lionel offered the Canadian Pacific diesel locomotives and streamlined cars for only that year. Likely believing demand had been met, top executives failed to advise another production run or additional equipment painted and lettered for the CP.

The Canadian National finally had its moment in the sun in 1960. Both the nos. 227 and 228 Alco A units featured plastic shells painted in a medium shade of green with a pair of narrow yellow stripes stretching across the upper third of the body. The railroad name, the catalog number, and “Built by Lionel” finished the graphics. However, the 227 had a closed pilot while the 228 had an open pilot.

Inside the shell, which was fastened to a blackened stamped-steel frame, the two units diverged. The 227 lacked a reversing unit and any sort of traction aid except for the weight riveted to the rear of the body. The only feature this diesel boasted was a headlight. The 228 came with a two-position reversing unit and two-axle Magne-Traction. It was equipped with a headlight but not a horn.

Promotional uses only
It’s intriguing to notice that neither of these Canadian National Alco units ever showed up in a Lionel consumer catalog. The 228 did appear in the advance catalog for
1961 as a separate-sale item for $19.95. Mostly, however, Lionel used the two diesels as the motive power of promotional outfits.

The 227 and 228 Canadian National Alcos are more difficult to find than many hobbyists assume. Somewhat scarce items with an attractive appearance, these two diesels, especially the 228, are desirable additions to any collection.

Lionel offered the no. 228 Canadian National Alco A unit as a promotional item between 1960 and 1962.