Not much can go wrong with this amusing S gauge accessory 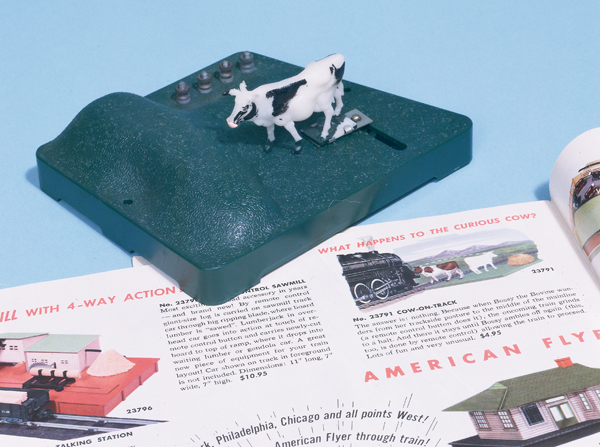 The world of animated O and S gauge toy trains accessories was, for all intents and purposes, a fairly serious one during the postwar era. Operating freight loaders, stations, and other facilities sought to imitate the activities associated with big-time railroading and industrial labor. There wasn’t time for frivolity.

Where animals were concerned, however, all bets were off. Lionel and Gilbert might approach loading coal and culverts, dumping logs and oil drums with a straight face, but when it came to transporting miniature cattle and horses avoiding laughter seemed impossible. The beasts moved in circles and fell over.

Dissatisfaction with the performance of its operating stockyard and horse corral may help explain why Lionel shifted to more exciting and realistic space and military accessories in the late 1950s. Circumstances were different in the world of American Flyer. As Gilbert’s no. 23791 cow-on-track showed, whimsy remained the order of the day as far as S gauge accessories were concerned.

Send in the cows and horses
Lionel’s introduction of its no. 3656 cattle car and corral in 1949 changed the toy train universe. Development Engineer Frank Pettit, who designed this item, showed how vibration generated by electricity could cause objects – in this case, models of cows – to shake, turn, and move. Also, the 3656 proved that kids could be attracted to models that simulated the transport of animals to market.

The commercial success of this path-breaking Lionel accessory got the ball rolling at the A.C. Gilbert Co. Before long, American Flyer boasted its own operating stockyard and car, starting with the nos. 771 in 1950. The same accessory, given a new number in 1957 (no. 23771) lasted through 1961.

Something different
An assortment of accessories replicating the shipment of cows and horses by moving them in and out of stockcars and through corrals might have been the beginning and end of animals on toy trains. Then Dick Fischer got a funny idea.

Dick and his wife, Doris, owned Arlington Hobby Crafters in northern Virginia. Toy trains and scale models were among the items the Fischers carried.

Doris recalled in the July 1996 issue of Classic Toy Trains how Dick, who had relatives living on a farm, conceived of a new and entertaining accessory that he shared with a sales representative from Gilbert. He envisioned a miniature cow being moved onto tracks to block a passing S gauge train. Then, thanks to remote control, the cow would be shunted aside so the train could resume its journey.

The salesman must have listened pretty well because in 1957, much to Dick’s irritation, Gilbert released its no. 23791 cow-on-track. Never did he hear a word of thanks for coming up with the idea or unveiling his HO prototype.

Meet Bossy the Bovine
The 23791 requested that kids with Flyer layouts put their imaginations to work. They should picture one of the cows on their operating stockyard having strayed beyond the fenced-in yard and wandering on to a main line or siding. One press of a button on the controller was all it took to move Bossy the Bovine, as the catalog named the hapless cow, on the track, where it automatically halted a train.

When the young rancher or engineer felt ready, he pressed a button to get the wandering black-and-white or brown-and-white plastic cow off the track and back on the dark green plastic base. Then the express could continue on its way.

The action was simple yet amusing for everyone watching. Unlike the animation created on the different animated stockyards, Bossy had no chance of getting stuck on a ramp or doorway or ever tipping over.