Two guys do the work so you can have fun 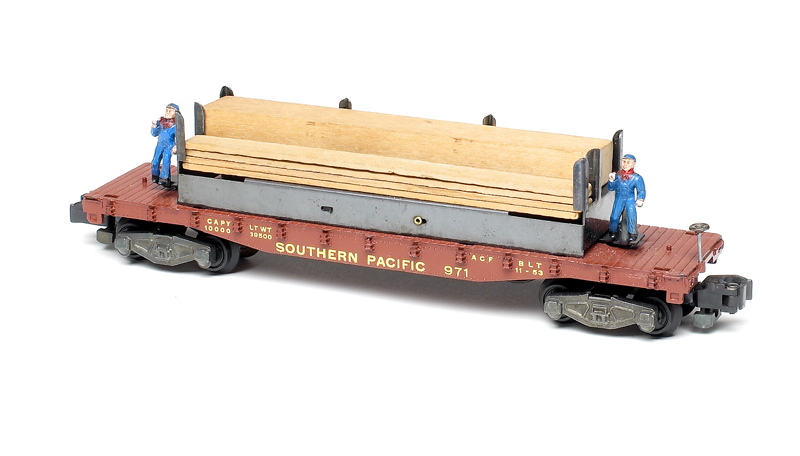 So much of the joy that we hobbyists associate with toy trains comes from our love of illusion. Like children watching a magician, we suspend all belief and forget that electricity is responsible for moving our O or S gauge trains.

Time after time we want to believe that laborers mysteriously reduced in size manage to handle actions – unloading barrels or halting a freight train – when our brains really know it’s being caused by household electrical current.

Trying to match Lionel
A perfect example of the magic that was generated by animated items is American Flyer’s no. 971 lumber unloading car. Introduced by the A.C. Gilbert Co. in 1956, this well-known and reliable S gauge operating car proved that designers there could keep innovating to frustrate rivals and earn profits for their employer.

Achieving those goals was particularly important for Gilbert because it had not entered the toy train market until the late 1930s, when it bought the assets of the American Flyer Manufacturing Co. and moved them from Chicago to its headquarters in New Haven, Conn. By the time that Gilbert had switched to S gauge trains after World War II, Lionel enjoyed almost a half-century lead.

Just to come within shouting distance of Lionel would require tremendous effort. That was especially true with operating cars and accessories. Lionel owned the patents to important techniques for using electricity and magnets to replicate the movement and loading of cargo. Capitalizing on those advantages, designers brought out Lionel’s first lumber unloading cars (nos. 3651 and 3811) in 1939.

Their counterparts at Gilbert refused to surrender, not even when in 1946 Lionel heralded the no. 3451, an improved version of its operating log car. The initial offering of American Flyer rolling stock featured similar models that were as plain as their O gauge cousins. Painted in solid colors with minimal lettering, they were intended to handle a basic chore consistently and record solid sales.

Gilbert forges ahead
Lionel’s engineers might have accepted the limitations of its log cars, but the men at Gilbert did not. They found a way to guide the no. 717 log dumping car and its descendant, the 914, into an exciting new realm. Those models relied on a solenoid to tip over a load of wood via remote control so the logs rolled off.

Then the breakthrough – the 971 lumber unloading car. With this 8¾-inch-long car, Gilbert could brag of having an appealing model that ran as smoothly and reliably as a pocket watch, but performed magic unlike any other operating car.

Designers modified the look of the flatcar so the frame was Tuscan Red (painted or bare plastic) and not black. They lettered it with a prototypical railroad name (the Southern Pacific) as a substitute for the ubiquitous American Flyer Lines.

Next, engineers devised a new mechanism that pushed flat boards off the tray. Then they installed a small worker at each end of the black-painted metal superstructure. Gears caused the figures (painted to be wearing blue overalls and a red shirt and scarf) to move forward as though they were kicking off the lumber.

This nice little touch of humanity transformed a cold hunk of metal riding on sintered-iron wheels into something unique and entertaining. Wisely, Gilbert’s team adorned the pair of laborers with names, Moe and Joe. The two guys didn’t really strain to unload the lumber, but the illusion worked its magic beautifully.

Each 971 came packed with a simulated block of lumber and eight planks that a young operator stacked on top. Pressing the remote controller caused a board to be pitched off the car – but kids were sure Moe and Joe were working!

More than Lionel ever did, Gilbert brought life and interest to its lumber car. Not for the first time, or the last, Gilbert’s engineers shrewdly recognized that adding a figure to an accessory or an operating car broadened its appeal.

One thought on “American Flyer’s no. 971 lumber unloading car”