Home / How To / Timeless Classics / American Flyer’s no. 636 depressed-center flatcar with reel 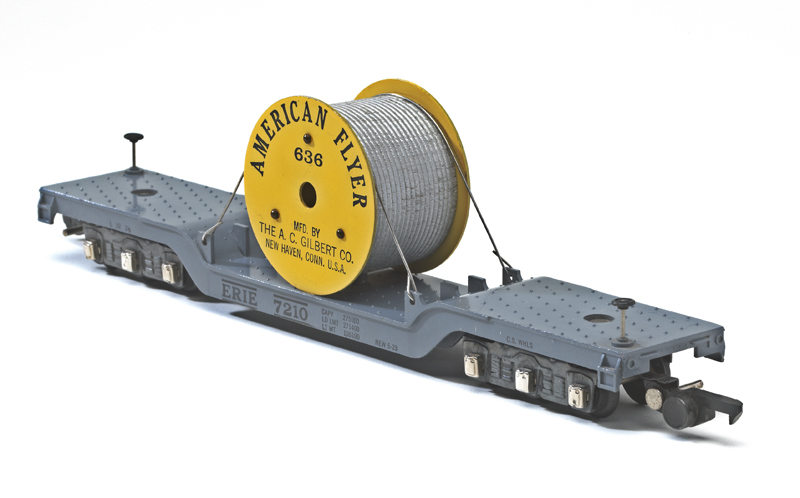 Even before World War II, the A.C. Gilbert Co. had experimented with loads for its flatcars. Of importance were the models with a small civilian or military vehicle, which could be unloaded via remote control. These models returned after the war.

Lionel decided against competing with Gilbert in regard to unloading flatcars. But it did release a regular flatcar transporting metal pipes and then logs. Next to hit the market (in 1947) was a die-cast metal replica of the depressed-center flatcars used to handle large and bulky loads. The no. 2461 featured a plastic model of an electrical transformer painted either red or black.

Gilbert never stops trying
The engineering department at the Gilbert factory in New Haven, Conn., wasn’t daunted by what Lionel had done. To judge from what entered the firm’s S gauge line in 1948, designers seemed to have only been motivated to surpass their main competitor. And did they succeed!

The 636 looked the way a depressed-center flat ought to. It stretched out nearly 11 inches, making it the longest freight car in the American Flyer roster. More than realistic, this 3⁄16 scale model looked sleek and esthetically pleasing.

The early variations of the 636 featured a die-cast metal body painted a regular gray or a shade tinged with blue. There was black lettering on both sides of the body identifying its railroad name and car number (“Erie 7210”), plus forms of data related to its capacity, weight, and built date (either “New 5-29” or “New 5-28”). A two-piece brake wheel was added at each end.

Designers fitted this long car with six-wheel sheet-metal trucks instead of the customary four-wheel types. Link couplers were the rule in the years before Gilbert developed its knuckle couplers.

The load was as good as the car – a realistic reel of cable. The metal sides came painted yellow; the simulated wood cable was silver. Black lettering stated “American Flyer” and “636” on the sides. Other lettering named the Gilbert Co. and its city and state. One screw and two wires held the reel to the metal body.

Scattered variations
Gilbert kept the 636 in its line as a separate-sale item through 1953. It also used this car as a component of a few freight sets, starting in 1949.

A scarce version of the flatcar with reel from 1953 had a pressed-wood body painted gray. That was the year Lionel challenged Gilbert with the no. 6561, an O gauge depressed-center flatcar with two reels.