Home / How To / Timeless Classics / American Flyer’s no. 326 steam locomotive and tender 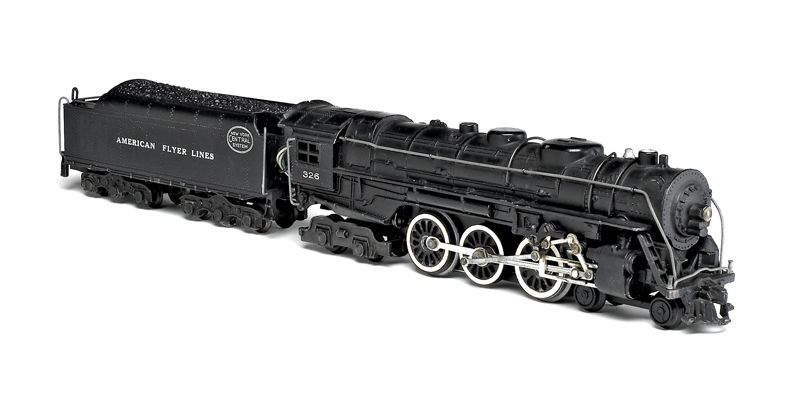 A great model with prewar roots
After Gilbert acquired the assets of American Flyer in 1938, it set out to develop a line of 3⁄16-inch scale models that ran over three-rail track. The firm announced the debut of a die-cast metal 4-6-4 Hudson and tender the next year.

The men assembling Gilbert’s first S gauge line for 1946 were eager to bring back the Hudson. Indeed, the catalog heralded three versions, differing only as to whether or not they had a smoking mechanism and “choo-choo” sound.

These Hudsons had many of the features on the 326 (cataloged from 1953 to 1957). Highlights included a metal bell; wire piping and handrails; six-piece riveted drive rod, piston, and valve linkage assembly; and operating headlight.

Flyer’s Hudson changed over the next few years. Smoke and “choo-choo” became the norm, so the nos. 320 and 321 were dropped after 1947. Only the no. 322 was cataloged in 1948, when designers moved the smoking mechanism and “choo-choo” unit from the tender to the boiler. This change necessitated relocating the reversing unit to the tender. For 1949, the Hudson became 322AC.

Another Hudson, the no. 324AC, appeared in 1950. The number meant it had Gilbert’s new built-in electronic whistle. Nothing stayed the same, however, and 1951 saw the debut of the no. 325AC, with the new “air chime whistle.”

Thus far, every 4-6-4 had a link coupler on its six-wheel tender. In 1952, however, Gilbert finished a knuckle coupler as realistic as Lionel’s. Among the first S gauge locomotives to sport the new coupler was the no. K325 Hudson.

The debut of the no. 326
The addition of “Red Glowing Smoke” and “Pull-Mor Power” (rubber tires bonded to a set of drive wheels to increase traction) in 1953 completed the Hudson’s evolution. The result was the no. 326, known as “The Pacemaker.”

This 19-inch-long workhorse (with a small ½-inch or a large ¾-inch motor) led passenger sets through 1955 and freights for another two years. Although the contents were changed, Gilbert named all of these sets “Pacemaker.”