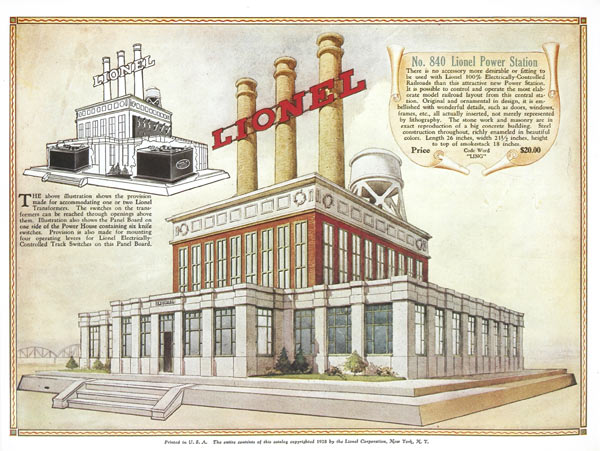 Lionel’s largest accessory of the prewar era, the no. 840 power station, made its debut with a full-page description in the catalog for 1928. It remained in the line through 1940. How Joe Pallone discovered an 840 – and a rare variation, at that – in the Chor Bazaar in Mumbai, India, remains a mystery that will never be solved.
One night in 1992, I was in Bombay (now Mumbai), India, waiting for a plane. Bombay is about as far away as a person can travel from Little Silver, N.J., where I grew up, and just as far from the Lionel fun factory where my greatest find was manufactured. But because one day I asked a particular question, I found out that distances can be overcome by using your imagination and being in the right spot.

Love affair with Lionel’s Super O trains
So much in my life had led up to my asking the question that brought me my greatest find. We all have stories about how we developed a love for toy trains.

Two years later my father bought me my own Super O outfit, the no. 2553WS. Led by a no. 736 Berkshire steam locomotive and tender, it came with five freight cars, including a no. 3672 operating Bosco car and a no. 3435 aquarium car.

I spent hours trying without success to figure out how to get the Super O switches to work. The problem, I discovered many years later when I opened the motor covers, was that someone had put cellophane tape on the tips of the contact arms, thus preventing a complete circuit that would energize the switch motor.

Remembering that my Lionel Berkshire outfit had been part of a store display layout, I can only guess that the guy who ran the toy department had taped over the contact arms to prevent kids from throwing the switches. He was a friend of my father’s and sold the layout to Dad at a discount late on Christmas Eve.

Thus began my love for Super O. However, since my switches wouldn’t work and my layout was no fun, my pal Tommy Johnson and I spent many happy days running trains on his Lionel tubular track O gauge layout.

Tommy and I staged spectacular crashes with his Lionel no. 2343 Santa Fe F3 A-A diesels in the lead. Sometimes, we could count on the participation of his cat, Mitty, who would conduct “cat attacks” on the moving consist.

But my greatest find had nothing to do with either Super O or Tommy’s layout.

One day I took some of my paper route money to Mike’s Toy Store and bought a little switcher. I loved this engine, a Lionel no. 59 Minuteman, and took good care of it. I still have it and am amazed that the box can be worth multiple hundreds of dollars today; the price I paid, $9.95, is marked in crayon on the box.

But the Lionel 59 Minuteman switcher wasn’t my greatest find either.

Join the military and see the world
Leap ahead to 1969, when I entered the U.S. Military Academy. At West Point I suffered through two semesters of electrical engineering and concluded that a better way to teach the subject would be to illustrate all the principles with toy trains.

Through the years that followed I kept my Lionel trains with me as I was posted to various military assignments. In 1985 I acquired a big box of Super O pieces from the late Frank Meunier, who rekindled my interest in toy trains.

This change in my life was followed by my building numerous temporary O gauge layouts. About the same time the original box of my ZW transformer was taped shut by a zealous mover, who also nailed my layout boards to the outside of the wooden shipping crates. But that’s another story for another time.

Anyway, on that fateful night in 1992 (cue the dramatic background music), still in the Army and having spent a week doing national security stuff with U.S. Senate staffers, I was waiting for a 3:00 a.m. flight out of Bombay.

Rather than hanging around the hotel bar and soaking up Kingfisher beer (not a bad option), I consulted my Lonely Planet guidebook. It mentioned the Chor Bazaar, where “you’ll find a phenomenal collection of … general bric-a-brac.”

Someone told me the bazaar was still open, even though it was 7:00 p.m. My escort said it had nothing but junk, and it wasn’t exactly safe. Sounded like my kind of place. Off I went!

One night at the Chor Bazaar
The bazaar consisted of about 300 vendors, housed in small shacks lined up along dirt lanes that were muddy since it had rained. Most of the shacks had miscellaneous items in big piles. A few vendors specialized: One man had used kitchen faucets, another was selling well-worn paperback books, and so forth.

One vendor had wooden boxes I recognized as having been used for naval chronometers and ship’s clocks. I asked if he had any of the timepieces. “Oh no,” he said, “I have only the boxes. Nobody wants the boxes; that is how I got them.”

Then I came across a vendor who had a bunch of modern toys, mostly plastic and broken. On one set of shelves there were a few small toys and a little iron locomotive paperweight. For some reason, I picked up the paperweight and uttered, “You don’t by chance ever see anything made by Lionel, do you?”

The vendor kind of perked up and sent one of his helpers into the small loft above us, which he accessed by standing on another guy’s shoulders and removing a part of the ceiling. Then he handed down a large metal rectangle that looked like a base for something, followed by more metal pieces.

I told him it certainly was not Lionel.

Eventually, a piece came down that was part of a building with green doors and windows. The vendor spied a small brass plaque on it. He wiped the grime off the plaque to reveal the words: “No. 840 Lionel Power Station.” Then he brought a section with three smokestacks held together by a sign – “Lionel.”

Now it was about 9:00 p.m. Here was a Lionel accessory that was unfamiliar to me. I had no good idea what it was, but thought I should buy it.

The vendor and I bargained. Finally, I gave him $30, thinking that was probably $28 too much. However, I rationalized this by telling myself that the sale would make his month and I would probably have spent at least that much on Kingfisher beer.

Back in the U.S.A.
Once back at the hotel, the staff packed the pieces in a big cardboard box.

At the airport, a security agent asked what was in the box. I replied kind of absent-mindedly, “Oh, it’s a Lionel number 840 power station.” It went on the plane as checked baggage.

I got the package home and put the pieces together. The power station was in poor condition, but the knife switches (I recognized them from the two semesters of electrical engineering) looked interesting. I wondered if I could use the 840 on the Super O layout of my dreams, which I hoped to build in the future.

I didn’t have any toy train reference books or other sources of information about this Lionel power station (I didn’t join the Train Collectors Association until 2000), and there was no way to learn anything it. So back in the box it went.

Discovering what I had bought
About a year later, in 1993, I went to a local train show to seek advice on how to take care of my 59 Minuteman switcher. The nice man I talked to happily removed the shell, showed me how and where to lube, and proceeded to crack a screw hole on what had been a shell in like-new condition. Thanks buddy!

I then found a dealer who was selling some pieces that looked like they were from the same period as the 840. When I told him what I had, he asked to come over to my house to take a look at the power station.

Once there, the dealer seemed to study the 840 carefully. He told me it wasn’t worth whatever I had paid for it … and offered to buy it for lots of money.

I wisely declined the dealer’s offer and put the pieces back into the box.

Since I was working on the professional staff of the Committee on Armed Services in the U.S. Senate, I decided one day to stop around the corner to the Library of Congress and ask for some reference books on Lionel trains.

I opened one to the page that had the 840, read the description, and congratulated myself on my $30 purchase. All the same, something was troubling: The 840 described had an orange roof, and mine had a red one. So I kept reading.

At the bottom of the section it said, “Very rare. Red roof. NRS.” I had to look up the meaning of “NRS”; it stands for “No Recorded Sales.”

A place on the layout
More than 15 years later, I have the 10 x 25-foot Super O layout of my dreams, though like most guys I’ll never consider it complete. Thanks to joining TCA and reading Classic Toy Trains, I know more about toy trains than I did in 1992. Thanks to Don Johnson, Lyle Leverich, Don Staton, Dennis Waldron, and Mike Spanier and the guys in his Super O Yahoo group, I have become almost proficient at repairing dead and hopelessly rusty Lionel Super O switches.

Through the years, I’ve often wondered how my power station found its way to India and how it turned up at the Chor Bazaar. Perhaps a diplomat at the consulate in Bombay got it for his son and left it behind when he was reassigned because it was so big. Or maybe it was a gift that a merchant or sea captain who lived in that great port city had brought back from the U.S. Interesting how toy trains (unlike their full-size counterparts) actually travel around the world.

Obviously, I had not set out to look for toy trains that night in 1992. But Eever since my greatest find, I always ask if anyone has seen anything made by Lionel.