The box for one of Lionel's best postwar locomotives 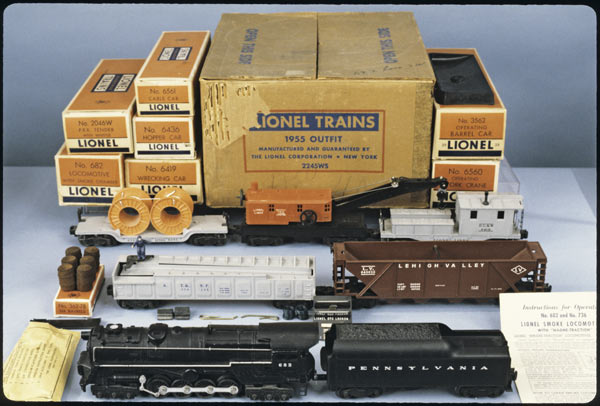 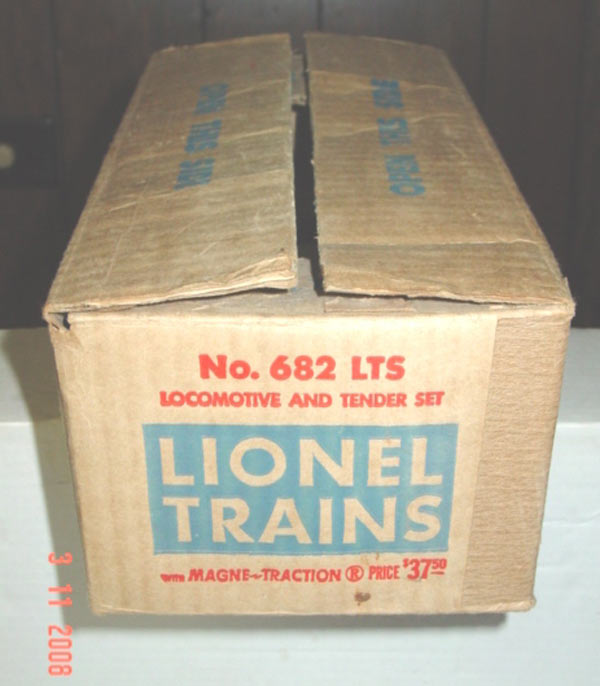 Anatol Vasiliev made an incredible discovery when he found the master carton for a Lionel no. 682LTS steam turbine and tender combination. Lionel used the same kind of package in 1954 and ’55, the only years it cataloged this item.
BEING A LONGTIME TOY TRAIN COLLECTOR and a member of the Train Collectors Association since 1971, I have had more than my share of great finds. Recently, though, I chanced upon one that I consider my greatest. See what you think.

Turbines without and with Magne-Traction

Like most postwar train enthusiasts, I have always liked the model of the Pennsylvania RR’s class S2 steam turbine that was a prominent part of the Lionel line. The 6-8-6 wheel arrangement looks impressive, and you can feel the power generated by the drivers as they move faster and faster down the three-rail track.

If you recall, Lionel introduced its turbine in 1946, when it brought out two identical versions: the no. 671 for the O gauge line and no. 2020 for the O-27 roster. Both locomotives featured a die-cast metal body that was painted black. The number was rubber-stamped in silver beneath the windows of the cab. (Yet another turbine was specially designed as the motive power of the Electronic Set.)

Additional details in 1946 included wire handrails and thick nickel rims on all the drivers. The horizontally mounted motor had two receptacles for handling the jack that plugged in the three-position reversing unit. The headlight operated, and the smoking mechanism used the smoke bulb Lionel developed for 1946.

Between 1947 and 1949, Lionel cataloged the nos. 671 and 2020 with modified boiler castings to accommodate the slot for the three-position reversing unit. The vertically mounted motor worked better than the earlier one had, and the improved smoking mechanism in the locomotives used a resistance coil unit.

With the additions of Magne-Traction and one-piece sintered-iron drivers with inset wheel weights, Lionel changed the number of its O gauge turbine to 681 in 1950. The engine came with an operating headlight and smoke. The cab number, still under the cab windows, could be rubber-stamped in silver or heat-stamped in white. Lionel also dropped the O-27 version of this big steamer.

The 681 returned in 1951 with no changes. The following year, however, the turbine was numbered 671RR because Lionel removed the Magne-Traction due to shortages of key metals during the Korean Conflict. Then, in 1953, the 681 was again a part of the O gauge product line, no different from the 1951 version.

For 1954, Lionel modified its turbine in a minor yet noteworthy way. A white stripe was painted along the running board of each side of the boiler. Also, a valve gear linkage was attached to the first drive wheel. These tiny details added elegance to the steam turbine and made it look even better than its predecessors.

Lionel offered the 682 locomotive and tender for separate sale in 1954, although anyone reading the consumer catalog would have been hard-pressed to learn this fact. No mention was made of the no. 682LTS in the back of the 1954 catalog, where separate-sale locomotives and cars were pictured and described.

Instead, the sole mention of the 682LTS came on page 17, right next to the full-color illustration of the 2217WS freight set. A brief listing informed readers that for $37.50 they could obtain the “Improved Steam Turbine.” The text noted that the locomotive “includes new striping and oil linkage eccentric on front driving wheels.” The engine and tender, it stated, were 19½ inches in length.

The description in the consumer catalog for 1955 stood out more clearly from the surrounding color rendering of the turbine and its tender on page 19. The wording including details that were missing the previous year, specifically, the stainless-steel handrails, nickel-plated drive rods, cab details (notably, the steps), and “highly-efficient universal AC-DC motor with silent direct worm drive.”

A special box for the 682LTS

Paul Ambrose, the author of the volume on cataloged sets in Greenberg’s Guide to Lionel Trains, 1945-1969, speculates that by 1954, the O gauge model of the turbine had about run its course. He considers the 682 to have been a last-ditch effort to win customers for this locomotive and thinks the outfit cataloged in 1955 amounted to an effort to get rid of leftover inventory of the 682 turbine.

If Ambrose is correct, then it stands to reason that the separate-sale turbine and tender combination must also have been an attempt to find a market for a steam locomotive that was losing popularity. This suggests that Lionel didn’t sell too many of them in 1954 and ’55. So how many boxed examples are there?

That question leads to what I consider my greatest find. Two years ago, I attended a small train show not far from where I live. There, I made a find that was overlooked by all the sharp-eyed collectors. It happened late in the morning, a few hours after the show had opened and guys had been walking around.

I am and have been a box collector and dealer in vintage Lionel boxes. Some boxes are scarcer and more difficult to find than what goes inside them. I have had my share of good ones. On this Sunday, my expectations were the usual kind we have these days of finding something interesting – not necessarily rare.

I had gotten to the show late. I walked around a few times and saw nothing special for sale. When this occurs, I fall back to looking for something else. I saw a table piled with magazines and train books. Nothing cost more than $5.

As I walked over to browse, the owner said he was helping a friend sell off the books and such. I started looking, moving one stack over to the side so I could see what was at the bottom. Then, under a stack I saw a Lionel box that looked like it had been used for switches or maybe a pair of Alco diesels locomotives.

“Hey,” I thought, “that’s exciting already.” When I took the box in my hand and saw what it was for, I almost got weak in the knees. It was a master carton for the Lionel 682LTS turbine and tender – in super condition!

In almost 40 years of collecting, I had never seen one of these master cartons before, although I knew from the catalogs that Lionel had offered this combination for separate sale. I couldn’t believe it had a price sticker of $5.

The deal was quickly completed. It took a few minutes for me to calm down, and I couldn’t wait to show my friends who were still hanging around. None of them could believe that I actually found the box this late in the show day.

Once I got the 682LTS master carton back home, I dug out a boxed 682 turbine to put inside with smoke pellets and instruction sheet. It is now my most prized Lionel collectable and gives my small collection a nice level of quality.