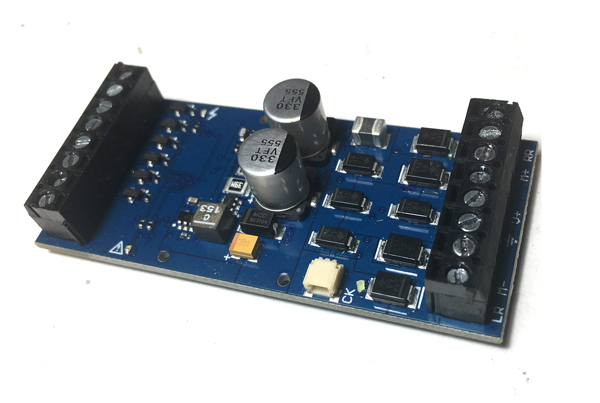 Soundtraxx introduced their Econami line of DCC decoders in 2015. Included in this line was a four-amp version, which was reviewed in the August 2016 GR. As the name implied, the Econami was intended to be a budget-friendly decoder; a little brother to their (then) soon-to-be-released Tsunami2 line of decoders. Fast forward two years, and Soundtraxx releases the four-amp version of the Tsunami2. Due to close manufacturing costs between the two products, Soundtraxx discontinued the four-amp Econami, offering only the Tsunami2 in the high-current, large-scale-compatible form. I have been running the Econami since I wrote its review and have been pleased with its operation overall. When the Tsunami2 was announced, I was eager to see what “big brother” brought to the table.

The Tsunami2 is available in one, two, and four-amp versions, and with steam, diesel, or electric sound files. The steam and electric boards are all-inclusive, while the company offers three different diesel boards, each with locomotive-manufacturer-specific, prime-mover sound files. Soundtraxx lists all of the sounds on their website to aid modelers in choosing the right board for their locomotives. I’m reviewing the four-amp steam board here. The lower-current boards may be suitable for smaller, large-scale locomotives. Sounds and functions are identical across the product range.

The Tsunami2 decoder is comparable   in size to other high-current decoders, measuring under 3″ x 1″. There are two rows of screw terminals, one on each end of the board, where you connect the DCC input (from track or wireless receiver), motor, and lighting functions. There’s also a plug on the board for connecting a “keep-alive” capacitor to maintain power to the board over dirty track. There is no connection for an external trigger for the chuff. The software on the board calibrates the chuff rate based on the rotation of the motor (more on that later). The board can handle 26V input, which should be more than adequate for DCC systems used for large-scale trains.

Like most modern DCC sound decoders, there are three control aspects to this board’s operation: motor, sound, and lighting. Like most modern decoders, the Tsunami2 uses the motor’s BEMF (back electromotive force) to control the speed of the motor. This allows precise speed control, from the slowest of crawls to highballing down the track. The decoder will maintain a given speed despite changing resistance from grades, curves, or the weight of the train. The motor control on the Tsunami2 gave me no complaints.

I installed the decoder in an LGB Mogul, turned the throttle to step 1 (of 128 steps) and the locomotive began to crawl at less than one scale mile per hour. I put a little bit of resistance against the locomotive and I could feel the motor control kick in, pushing against that drag in order to maintain even that very slow speed. Speed control throughout the range was smooth and even.

The Tsunami2 offers two separate braking rates: “independent” and “train.” The independent brake rate simulates slowing the engine using just the locomotive brakes. The train rate simulates slowing using the brakes on the entire train. You can program these values any way you like, so the practical difference between them is whatever you want it to be. The board also allows you to override these momentum settings, giving you direct, proportional control of the motor based on the throttle setting. (I find this useful for troubleshooting bad track, where I need to run the train back and forth over the rails to see what is happening.) Also, if you’re running on a command system that does not have an emergency-stop button (like Airwire), this allows you to stop immediately by engaging the momentum override and slamming the throttle to zero. The Tsunami also provides “yard mode,” which cuts your speed in half—useful for junior engineers whose mission is to see how fast trains will go.

There are six lighting-function outputs that can be programmed to a number of different lighting patterns, from steady headlights to flashing or flickering. The brightness of each output can likewise be independently programmed and they can be linked to sounds, such as the generator. On a steam locomotive, the generator provides power to the lights so, if the decoder is used to turn on any of the lights, the sound of the generator will play.

The biggest upgrade from the Econami is that the Tsunami2 board offers more bells and whistles—literally. There are 63 different whistles, 53 bells, 10 air pumps, eight generators, and 10 different chuff sounds programmed onto the board. The modeler selects which of these to use by changing a CV (command variable). That’s a lot to choose from and I like having all the sounds pre-loaded onto the board. This makes it simple to change sounds over and over again until I get the ones I like for whatever locomotive I’m working with (or to change it for no other reason than I’m tired of the whistle and want a new one). All sound files are high quality, with only a few having any distortion or unwanted background noise.

Like the Econami, the Tsunami2 offers what Soundtraxx calls Dynamic Digital Exhaust (DDE). This is a programmed correlation between the cadence, tone, and volume of the chuff, as it relates to the throttle setting and the load being placed on the locomotive. As you increase the throttle from zero, the chuff will get louder and richer until the locomotive reaches a constant speed, at which point it will become quieter. If you decrease the throttle, the chuff diminishes to a faint sound.

I mentioned earlier that the Tsunami2 lacks an external trigger for the chuff. Instead, the board measures the motor’s BEMF and triggers the chuff in relation to the pulses it receives from that as the motor rotates. In the past, this would have raised red flags for me, as previous generations of this type of control have been lacking. However, after playing with the Econami, and also the two-amp and four-amp versions of the Tsunami2, I have no reservations. I’ve put this system in five locomotives and have been able to calibrate each quite accurately to four chuffs per rotation of the wheel and see it remain accurate throughout the speed range.

The Tsunami2 offers a number of ways to customize the sounds coming from the board. First, the volume of each sound can be controlled individually. If you don’t want to hear Fireman Fred shoveling coal into the firebox, just turn down Fred’s volume. If you like loud whistles, crank up the volume of the whistle relative to the other sounds.

The system also offers a seven-band equalizer, which allows you to customize the frequency response of the sounds to best match the speakers you’re using in the locomotive. There are presets and also a user-programmable setting. If you’ve ever played with an equalizer on a stereo, this does the same thing. You can also add varying amounts of reverb to each sound. This creates a kind of echo effect that can make sounds (like whistles) a lot richer.

In terms of volume, the Tsunami has a three-watt amplifier, which can get pretty loud. I run mine at about 15% volume, which allows me to hear the sounds of the train fade as the locomotive runs around my railroad. At maximum volume, I can hear the trains from the street (which is generally frowned upon in suburbia).

I’m pleased with the Tsunami2’s sounds and operation. The advances made in sound and motor control are too cool, and I’ve found myself energized recently by running locomotives with these new decoders. They offer a whole new dimension in realism.

One thought on “Soundtraxx Tsunami 2”