A compact steam switcher with a dual-mode sound decoder 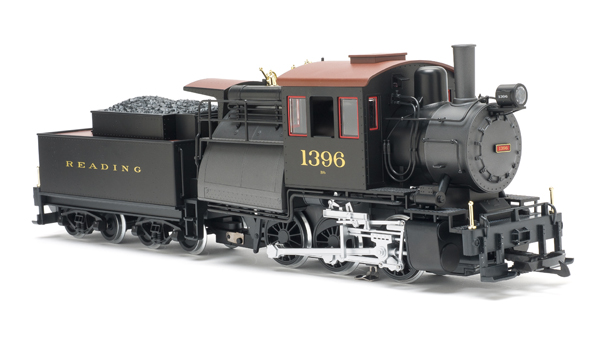 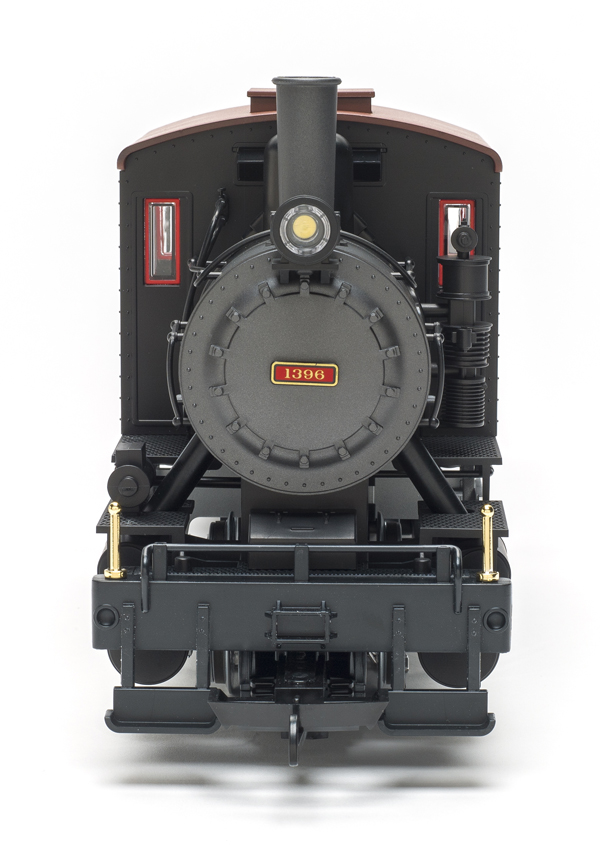 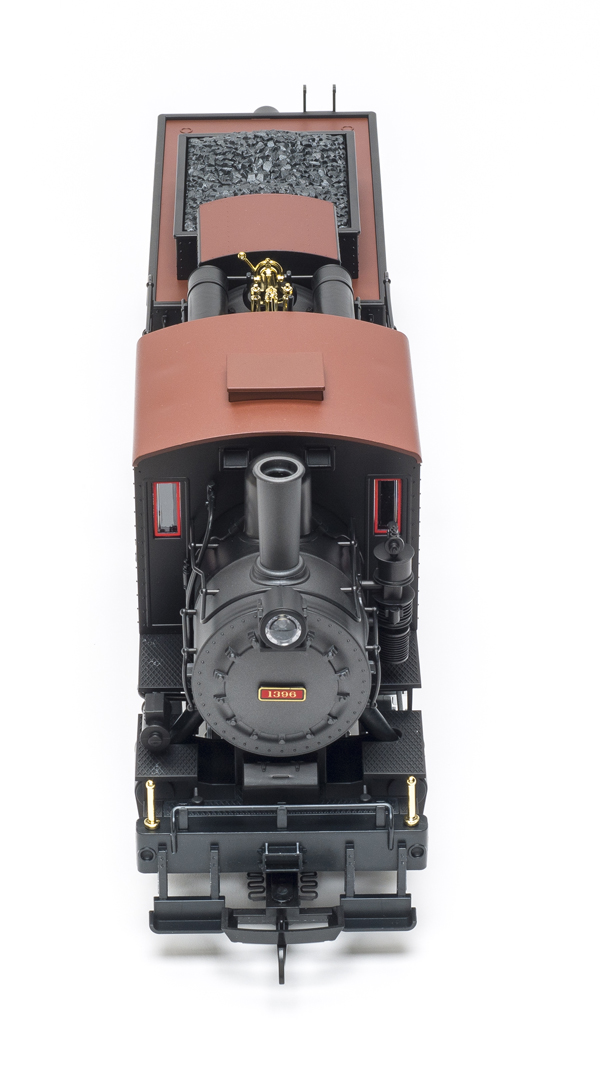 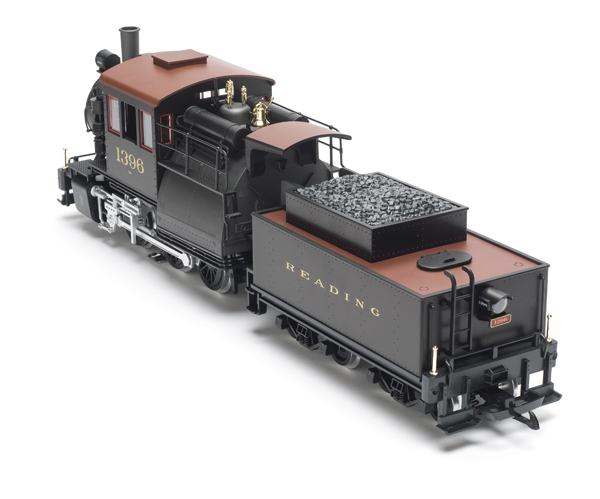 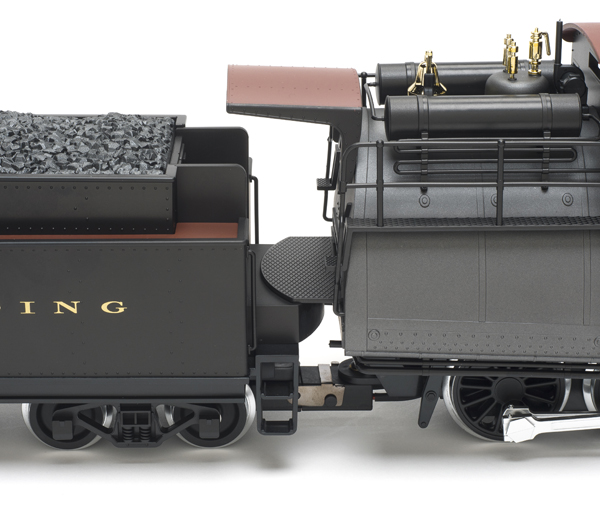 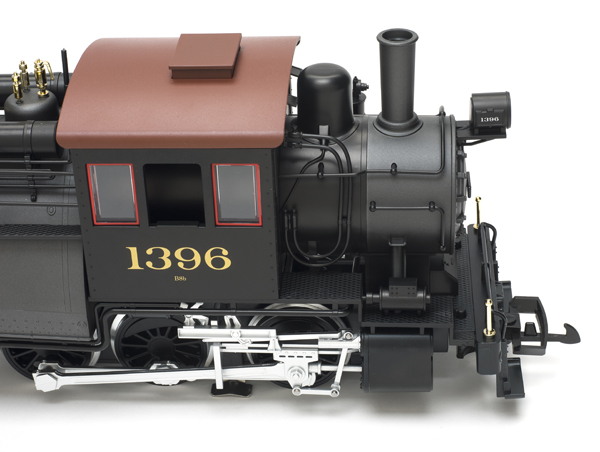 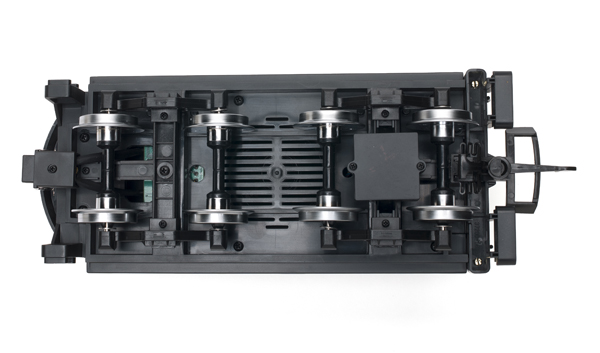 Pint-sized prototype: Camelback, Mother Hubbard, and center-cab are just some of the names for Reading Co.’s 0-6-0 steam switcher. Regardless of the name, the short-wheelbase locomotives were distinct. The cab, located at the center of the engine ahead of the firebox, straddled the boiler. The Wootten firebox, built wider than traditional fireboxes for burning ungraded pieces of Anthracite, was at the rear of the engine. The fireman shoveled coal into the firebox while standing on the tender plate between the engine and tender.

Our sample is decorated as a Reading Co. class B8b 0-6-0 no. 1396, part of the railroad’s 1393 to 1399 series built by the railroad in 1913 and 1921. The full-size engines were the last new Camelbacks built for the Reading Co. and had 50″-diameter drivers and an 9-foot wheelbase, making them ideal for negotiating the tight curves of industrial switching districts. In the Reading Power Pictorial (D. Carleton, 1973), author Bert Pennypacker notes that “the concentrated weight banned B8bs from operating over certain bridges.”

The Camelbacks, workhorses for the Reading for many years, were removed from the roster in the late 1940s. Sadly, no examples of class B8b Camelbacks were preserved.

Something old, something new. The 0-6-0 Camelback features parts from PIKO America’s 2-6-0 Mogul, namely the drivers and tender. The six hard chrome ball-bearing drivers have black spokes and counterweights. Factory-installed traction tires are on the front drivers. The rods, valve gear, and crosshead guides are plastic. Metal pickup shoes are located between the front and middle drivers.

Most, but not all, Reading Co. class B8b 0-6-0 Camelbacks had Taylor slope-back tenders. The repurposed Mogul tender is a reasonable stand-in for the
tender used on some Reading Co. 1390-series Camelbacks.

The engine is essentially all-new tooling above the drivers. The boiler and firebox is a one-piece casting with a separate smokebox door. The sand dome and sand lines are molded; the air pump, handrails, and some piping on the boiler are separate, factory-applied parts. The headlight is mounted at the top of the smokebox door, and the number plate is in the center, both following Reading Co. practice.

Centered between the boiler and firebox is the cab, which features a separate roof and roof vent. Though the cab lacks interior detail, there should be enough room for figures depicting an engineer and brakeman. The window glazing is framed in red.

Behind the cab is the Wootten firebox. Situated on top of the firebox is a molded dome with a separate, plated whistle and safety valves. In front of the dome is a plastic generator; behind it is the bell bracket and plated bell. Air tanks with freestanding piping frame the details on top of the firebox. The walkways and tender plate feature raised diamond-tread detail. A roof for the fireman is attached to the end of the firebox.

The engine is connected to the tender via a wired drawbar. The locomotive end features an 8-pin connector; the tender end an 8-pin socket. A metal latch on the tender’s drawbar folds down onto nubs on the engine’s drawbar to form a secure connection that won’t pull apart under load.

The tender has a one-piece plastic body with rivet detail, molded coal bunker doors, and separate plastic grab irons on the front and back corners. The raised coal bunker is a separate casting with a coal load that fits neatly inside.

On the rear of the tender is a positionable uncoupling lever, plated flag posts on the corners, a separate ladder, a hook-and-loop coupler, and a backup light with a number plate below. The end beam, which features a molded coupler pocket, poling pockets, and footboards, is a separate casting attached to the underframe with two screws.

Six Phillips-head screws hold the tender to the underbody. Lift the shell off carefully, as wires from the sound decoder are tethered to a printed-circuit (PC) board attached to the underside of the tender.

Inside the tender, above the front truck, is the SoundTraxx sound decoder. Behind that is a downward-facing 3W, 8 ohm speaker mounted over slats in the underbody. The solid-bearing tender trucks are multi-piece assemblies, with screws securing the sideframes to the bolster.

Lights and smoke. The Camelback engine features a SoundTraxx dual-mode sound decoder. A volume control dial is located under the water fill hatch on the tender deck.

The model has a directional golden-white light-emitting diode headlight and backup light. Pressing function 7 on a DCC throttle allows lights to be dimmed, following Rule 17 lighting.

A 5V smoke unit is concealed in the smokestack. The on/off switch for the unit is adjacent to the volume in the tender. The smoke unit is not fan driven, but still generates a decent plume of white smoke.

On the test track. I compared the model to prototype drawings in the Model Railroader Cyclopedia: Vol. 1 Steam Locomotives (Kalmbach Books, out of print) and Steam Locomotives of the Reading and P&R Railroads (Greenberg Publishing Co., 1988). To make room for the pickup shoes, the wheelbase is a scale 6″ long. The drivers are 42″ diameter. The locomotive is a scale 1’9″ narrow and 1’6″ short.

The 0-6-0 can be operated on layouts with DC or DCC. I tested our sample in DC using an LGB Jumbo controller. Sounds came on a 5V. As I advanced the throttle, the bell started ringing and two whistle blasts sounded (three blasts in reverse); the model started rolling smoothly at a 2 scale mph at 11V. The engine achieved a top speed of 57 scale mph at 24V.

As with other decoder-equipped models, the number of sound and light features is limited in DC. A reed switch concealed under the rear tender truck activates bell and whistle sounds when the locomotive passes over PIKO no. 35268 track magnets, sold separately. Brake sounds are triggered when the speed is reduced.

Sounds of the air compressor pump and coal being shoveled into the firebox can be heard when the locomotive is in “standstill” mode, which requires 5 to 6V of track power. The engine must be at a complete stop to change directions. Some DC functions are programmable, which requires a DCC system.

I then tested the model in DCC using an NCE PowerCab. From the factory, the locomotive’s default address is 3. However, it can be changed to any address between 0 and 9,999. The engine seemed to hesitate slightly at speed step 1, but this should smooth out after the engine has had some time to run. At speed step 2, the model crawled along at 2 scale mph.

At step 28, the Camelback achieved a top speed of 28 scale mph. I was able to enjoy the full complement of sound and lighting effects with DCC.

Function settings 0 through 3 are the headlight, bell, long whistle, and short whistle, respectively. Other settings include steam release (F4), smoke unit (F6), and mute (F8); F5 is not used. The decoder has three whistle options, which can be selected by changing Configuration Variable (CV) 115 to 0, 1, or 2. Bell and whistle effects will also activate in DCC if the model passes over track magnets.

I switched a few cars with the 0-6-0 as well. The locomotive pushed and pulled cars through PIKO America R5 and R7 manual turnouts without incident. With
a drawbar pull of 36 ounces, the 0-6-0 is capable of pulling 36 freight cars on straight and level track.

One function setting I especially liked was half speed (F10). This setting is ideal for switching and other slow-speed operations. The decoder also features automatic sound effects, including an air compressor, steam exhaust chuff (synchronized to the model’s speed), and coal being shoveled into the firebox. To return the decoder to its factory settings, change CV8 to 8.