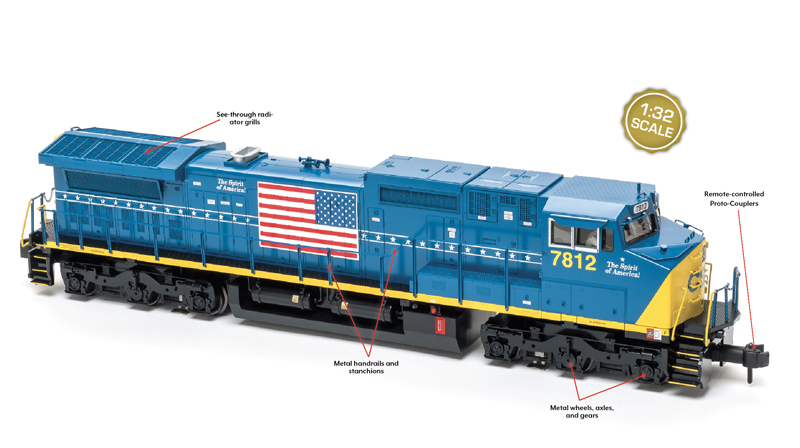 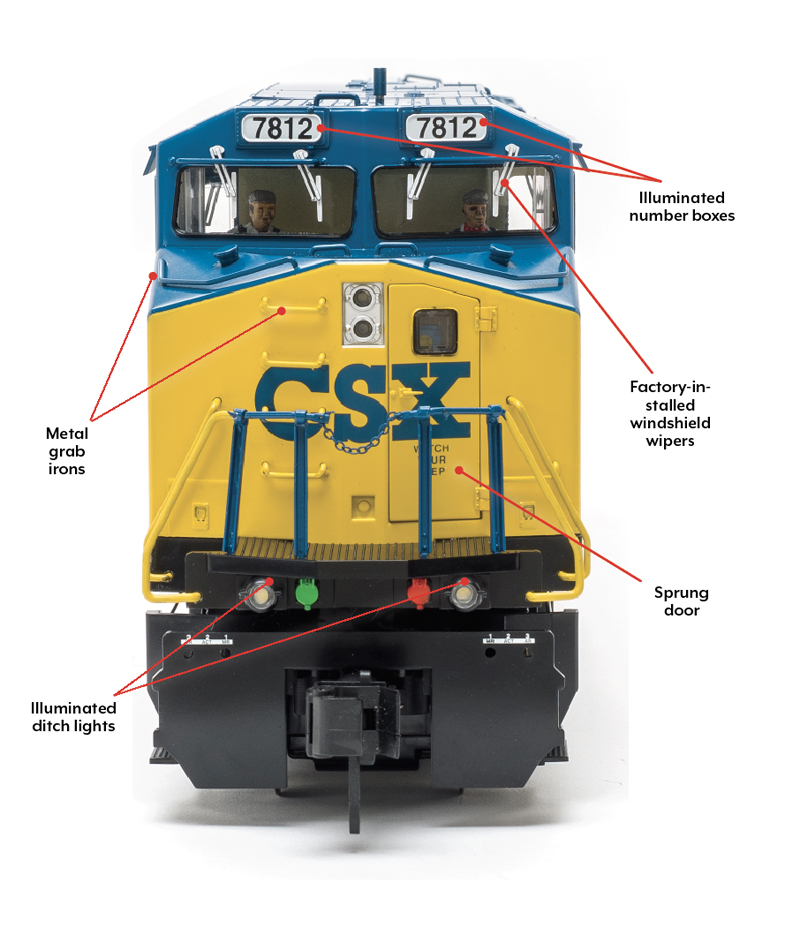 William Zuback
A new run of 1:32-proportion General Electric (GE) Dash 8-40CW diesel locomotive has been released by MTH in its RailKing One-Gauge product line. The model has a polycarbonate body, two motors with flywheels, and Proto-Sound 3.0 digital sound. We last reviewed this model in the February 2006 GR.

The prototype. General Electric’s Dash 8 line, the first production units equipped with a microprocessor, is what many consider the start of the third generation of diesel locomotives. In December 1989 GE began production of the six-axle Dash 8-40CW, the W indicating wide nose (also referred to as a Canadian, comfort, North American, safety, or super cab). By the end of the production run in November 1994, GE had turned out 903 units.

The model. Our sample is decorated as CSX no. 7812, a Dash 8-40CW built by GE in August 1992. The full-size unit was renumbered 1992 and repainted at the railroad’s Waycross, Ga., shops a month after delivery. The locomotive led President George H.W. Bush’s whistle-stop tour train across the United States (MTH offers this locomotive as item No. 70-2121-1). Following its presidential duties, the locomotive returned to its as-delivered number. The yellow nose was repainted, with “1992” replaced by “CSX.” The unit retained The Spirit of America scheme until 1999, when it was repainted into CSX’s yellow, blue, and gray scheme.

The UV-resistant paint on our model was smooth and evenly applied, with crisp color separation lines. The American flag was correctly oriented on both sides of the long hood, with the canton to the right on the engineer’s side and to the left on the brakeman’s side. Parallel white stripes framing stars are on both sides of the hood. There were a few voids in the stripes and stars between the doors, but nothing that couldn’t easily be fixed with a fine brush and some paint.

Lots of options. The MTH Dash 8 can be operated using alternating current (AC), direct current (DC), Digital Command Control (DCC), and with MTH’s Digital Command System (DCS). The electronics will detect which system is being used once track power is applied. However, if you’re using DCC or DCS, the selector switch located on the underbody behind the front truck must be set to match the system. The Proto-Sound 3.0 platform allows users to install software updates, available on the MTH website, with DCS Consumer Loader version 2.30 or later (This also requires a Track Interface Unit [TIU] with version 4.20 or later firmware).

The locomotive is powered by two flywheel-equipped motors, one over each truck. The model features super capacitors, which provide power for approximately 15 seconds when track power is turned off or interrupted on dirty track.

The downward-facing speaker is in the bottom of the fuel tank. The model features a variety of sounds, including engine rumble, bell, air horn, and announcements. Smoke unit and volume controls can be reached through the front door.

The locomotive is equipped with MTH remote-control Proto-Couplers and includes hook-and-loop couplers. The road locomotive has mounting pads for Kadee 1:32-proportion couplers (nos. 820 or 920, sold separately). From the box the Dash 8 features articulated pilots. Modeler-installed fixed-body pilots are included.

A hefty hauler. The Dash 8-40CW tips the scales at 10.2 pounds. The polycarbonate body is complemented with metal handrails, a metal multi-chime air horn, see-through vents, and factory-applied windshield wipers. Inside the cab are two factory-painted crew figures. The plastic truck sideframes include a separate air line, brake cylinders, and shock absorbers. The trucks use metal wheels, axles, and gears. The snow plow and m.u. cables are modeler installed.

I compared the model to diagrams and information published in The Car and Locomotive Cyclopedia of American Practice (Simmons-Boardman, 1997). The model’s dimensions either match or are within a few scale inches of the prototype.

I tested the model with a Bridgewerks Morrison DC power pack, an NCE Power Cab DCC system, and MTH DCS system. On DC, the sounds came on at 6.7V, and the model started moving at a scale 5 mph at 9V. The model achieved a top speed of 72 smph at 22V, only two mph higher than the prototype’s top speed.

In DC, only the diesel engine rumble, squealing brakes, and idle sounds function. The bell, horn, and announcements can’t be activated in DC.

Using the NCE Power Cab, the engine moved at 4 scale mph at speed step 1. At speed step 28, it moved 32 smph. Information on adjusting configuration variables (CVs) and fine tuning the speed curve are contained in the operator’s manual.

With DCC and DCS I was able to activate the bell, horn, announcements, and the other sound effects. Though the model will negotiate R2 curves straight from the box, it will look better on wider curves.

Two wheels per truck are fitted with traction tires, so the Dash 8-40CW is a strong puller. The model has a drawbar pull of 60 ounces, which is equivalent to 60 free-rolling cars on level track.

The MTH RailKing One-Gauge Dash 8-40CW is certainly just as good as it was the first time around. I especially appreciate that the model can be operated in four popular modes. With realistic sound and lighting, the model will attract attention on any railway. 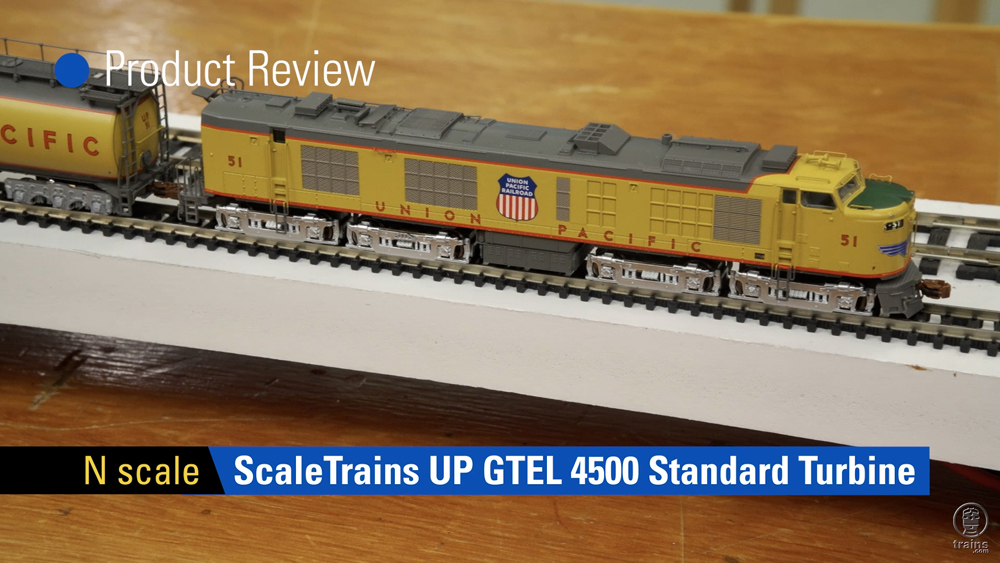