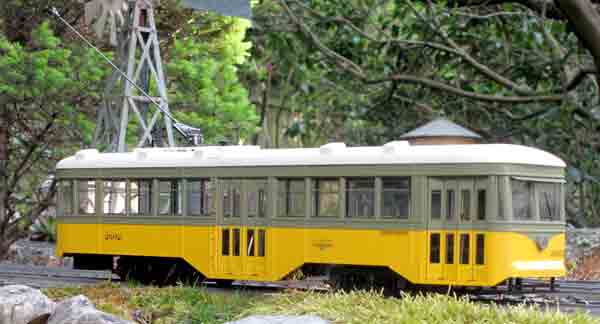 I am somewhat of a closet trolley/interurban buff, and I’m specifically interested in the Los Angeles Railway (LARy) and Pacific Electric. My grandfather was a trolley conductor in Los Angeles. The prototype cars for the LARy were built by the St. Louis Car Company just as the Depression was getting under way. Two were ordered, Nºs 2601 and 2602; our sample is lettered for Nº 2602. By the time recovery from the Depression was in progress, PCC cars were coming online, so no more cars of this type were ordered. Both cars were taken out of service around 1950. Nº 2602 (our model) was scrapped around 1955, while Nº 2601 was sold to an enthusiast group and now resides at the Orange Empire Trolley Museum in Perris, California, where it has been undergoing restoration for about 10 years. Both LARy cars were double ended, meaning there was a control cab at each end, with center and front doors on each side (the right side, from the respective control cabs).

This series of streetcars is Bachmann’s first foray into 1:29 scale. I was happy that our review sample is a Los Angeles Transit car (LAT followed the Los Angeles Railway after WWII). It is painted in the “fruit salad” color scheme, with a white roof, a green upper section, and a yellow lower portion. The interior is brown, and the undercarriage black. Using a 1:29 scale rule, the unit measures 46′ long over the buffers, 8’4″ wide, and 10’3″ tall to the actual roof above the railhead. These dimensions are reasonably consistent with available drawings.

Fit and finish are good. The roof fits snugly and evenly all the way around. Windows on our review sample fit well, with recesses molded in for the window muntins. Paint and graphics are well done, with no overspray or masking issues. The body and roof of the car are plastic, while the frame is cast metal.

It appears that the prototype for Bachmann’s car was Baltimore’s Nº 6119 Peter Witt center door, single-end car, which is in the Baltimore Streetcar Museum. The LARy cars were double ended, with two trolley poles. Should I decide I need a double-end car, with four sets of doors and two trolley poles, I believe that,
with a second car, I could cut and splice one together.

The trucks are very nice. They have brass gears with Oilite bearings, and a steel, single-lead worm. Dissimilar metals in a gear train are desirable for longevity. (Using identical materials can result in galling and rapid failure.) Both trucks are powered, as are all axles. Since there is no provision provided for connecting a trailer, I wondered why the car has dual power—perhaps the smaller motors necessary to fit in the small trucks dictated the need for two of them. The unit runs smoothly and reasonably quietly. The upper part of the main motor block is metal, while the lower cover, with integral sideframes, is plastic.

The car is supplied DCC ready. The main circuit board is accessed by removing the center section under the car, between the trucks. It is referred to in the provided drawings as a “fuel tank.” This is held in place with four small Phillips-head screws. Please note: these are machine-thread screws, not to be mixed with the other screws in the car.

The only paperwork that came with this car were exploded drawings of the unit. There was no owner’s manual to describe how it all works, which would have been quite helpful.

The “Trolley Pole/Track” slider switches pickup points from one rail of the track to the trolley pole. Two switches, one marked “Rear LED” and the other marked “Int LED,” toggle between DC and DCC power. The switches can be accessed by turning the unit over and removing this cover. Once the switches have been set and the cover replaced, the car is returned to its upright position. The shorting plug (dummy plug) is in the eight-pin decoder socket. The plug is actually a sandwich. Removing it will expose 21 pins sticking out of the main board. Separating the sandwiched plug will reveal an eight-pin plug.

The “trolley catcher” or trolley-pole retriever, on the rear end of the car (where the rope feeds into a spring-reel mechanism) is not sprung. It is a black plastic peg with the black “rope” tied to it and the pole. When the pole is clipped in its “down” position, the rope hangs loose.

The trolley pole itself is nicely done, with a freely rotating wheel and four springs to raise the unit. The pole pivots in a metal base on the roof, connected to contacts that mate with the lighting circuit board above the seating area in the interior of the car.

This unit comes with top-mounted rear marker lights, which light up (the full-size LARy car did not have marker lights on the top of the car ends: they were near the bottom). On straight DC power, the unit’s white headlamp and rear brake lamp are on, regardless of the direction the unit is traveling. The 10 interior lights provide good inside illumination. Through the windows, the interior looks nice. It is well laid out, with both lengthwise and transverse seating and stainless vertical grab poles at the usual locations. Doors open manually and there is no provision for retaining them in the open position. I was able to fiddle with them and make them stay open, but vibration caused them to self-close.

When I opened the car, especially without an owner’s manual, I had to play around a bit. I found that the Phillips-head screws that are not pocketed (or recessed) are the ones to be used when removing the frame. The recessed screws hold the seats in place. You need to remove the bottom cover, with the four small machine screws mentioned earlier, to find one more small Phillips-head screw and one large Phillips screw beside the side doors. The small screw is not a machine screw so, when re-assembling the unit, don’t mix them up with the “fuel tank” screws.

The car comes apart nicely, making the addition of people quite easy. The wires to the markers are not equipped with plugs, so there is nothing to relieve the strain at the top circuit board. If I was going to go into the body more than once, I think I would install plugs to prevent a wire from being pulled off the board or lights; the wires can be quite taut when the unit is open.

The catalog lists a “photo-etched brass safety screen per prototype.” I am guessing this is a “pedestrian catcher,” but no photo-etched brass safety screen was provided in the box, nor is it shown in the parts drawings.
None of this detracts from this nicely painted, smoothly operating representation of an LAT or LARy trolley in “fruit salad” colors. If you are interested in this particular prototype line, or just like streetcars, you need one of these units.