A custom model of a common freight car 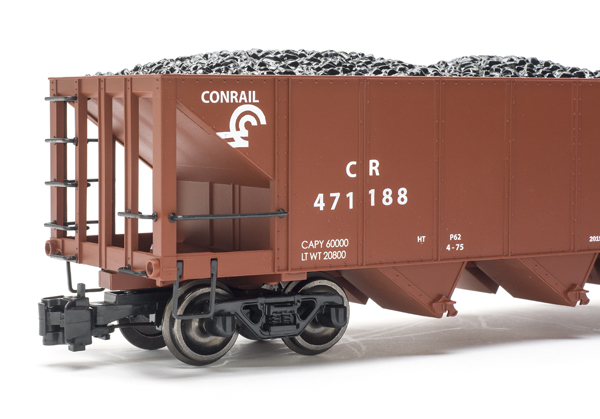 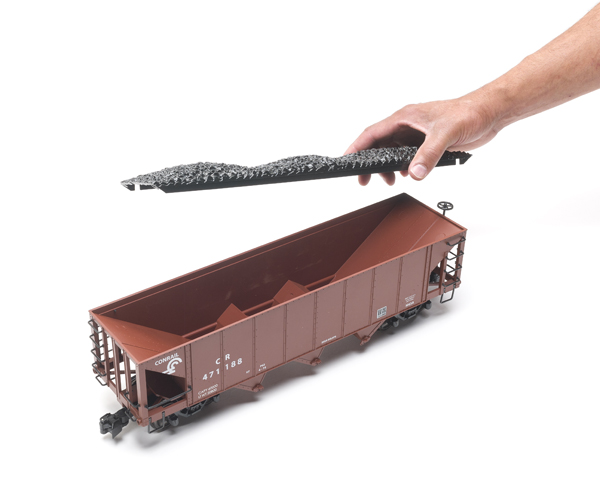 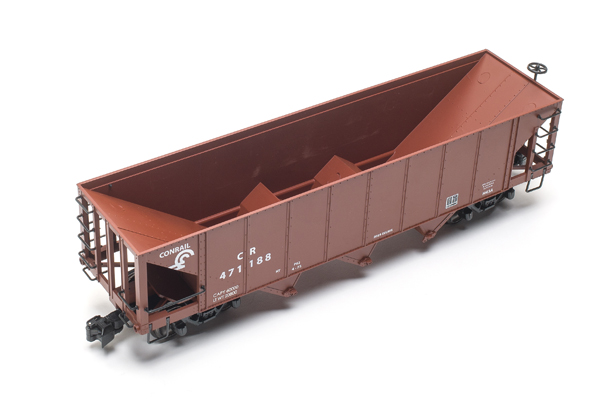 The prototype. From 1976 until the early 1990s, 100-ton, three-bay hoppers were the backbone of Conrail’s coal-hauling fleet. This car models the H43A version, which was a subclass of the H43. They were originally designed by the Pennsylvania RR, passed to Penn Central and eventually went to Conrail. Many survived until Conrail’s end (1999).

The model. This car is part of Bachmann’s Big Haulers line, which is 1:22.5 scale. According to prototypical measurements cited on The Conrail Cyclopedia website (crcyc.railfan.net), the H43 class hoppers were 45′ long. Accordingly, the H43A model should measure 24″. However, this offering is truncated by 73⁄8 ” of that length. The prototype cars had 12 panels, while the model has 10. Yet, when compared to photos online, this model still captures the overall style of the prototype quite well.

The all-plastic model is ready to run. Grab irons, stirrup steps, and the vertical brake staff are separately applied plastic pieces. The trucks are a generic solid-bearing style with the coupler shank mounted to the bolster. One screw holds the coupler to the shank, so it would be easy to switch to a hook-and-loop coupler instead.
Bachmann couplers measure about 5⁄16″ lower than the NMRA-supplied coupler height gauge tool. It’s worth noting that this tool measures the height of body-mounted couplers.

Markings and road data compare favorably to prototype photos, though likely there were a number of variations over the years. One obvious difference is the subtle 2019 ECLSTS mark in the bottom center of the car. In fact, it’s so subtle that anyone seeing this car run could easily overlook the show marking. Lettering was crisp and clean. The Conrail “can opener” herald is nicely rendered, even over the rivets. The only issue I could find with the lettering is some thin printing on the two “8s” of the road number (one side only).

Inside the car is a removable coal load that press fits onto the car’s top. The side ends of the load are tapered, so it’s easy to lift out with your fingers. The coal looks a bit shiny, but could be easily toned down with a shot of Testor’s Dullcote. Underside detail is spartan—you’ll see the hopper bays and center sill. The inside of the car has details on the slope sheets. There are also a dozen circular injector-pin marks along the inside. The hatches at the bottom of the car are non-functioning.

On the track. The wheel gauge is tight, per the NRMA-supplied tool. We compared this car’s gauge and coupler height to a 2008 Bachmann Big Haulers boxcar. Both cars had a similarly tight wheel gauge. They coupled together correctly.

I set up both straight and curved track sections to test the car, with and without the load. It tracked well and did not wobble.

This is a good model of a common hopper car. Given that most of the prototypes were in service for many years, this car could be heavily weathered or customized. A string of them behind a Conrail diesel would look great.