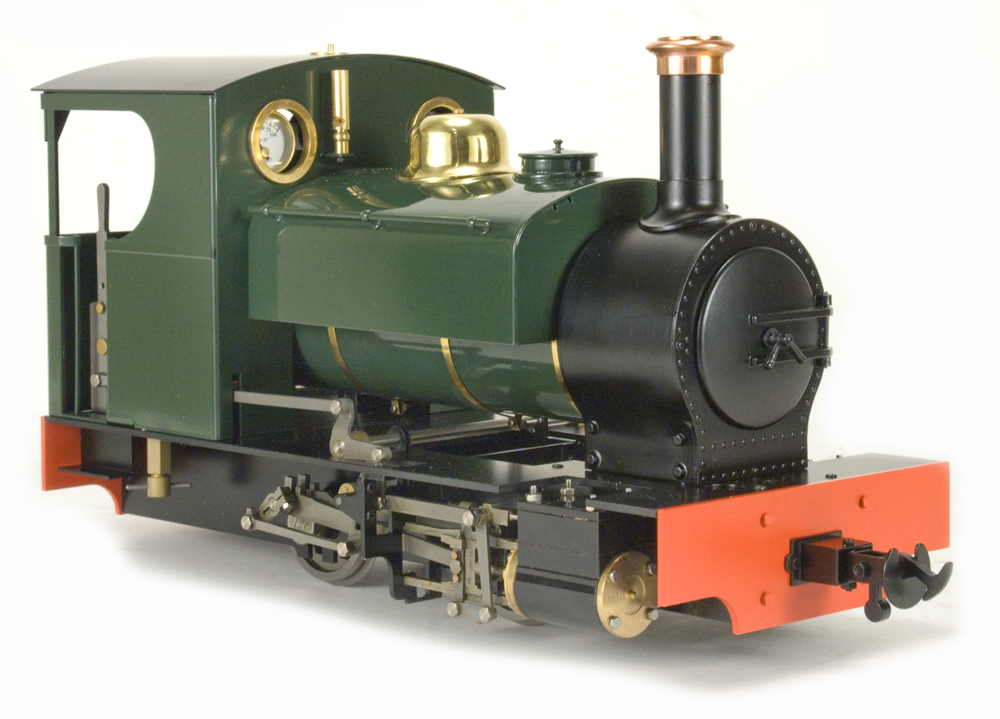 A right-front angled view of Accucraft’s Sabrina locomotive.
Garden Railways file photo
A version of this article appears in the Summer 2020 issue.

Sabrina is one of a pair of new freelance live-steam locomotives from Accucraft. Our review sample is painted an attractive dark-green. The British-style engines are built to 1:19 scale (16mm to the foot), which is the UK standard garden scale for narrow-gauge live steam-ers. However, that scale is close enough to the US scale of 1:20.3 as to make little difference.

This locomotive could be considered an entry-level engine, although most starter loco-motives are pretty stripped down when it comes to amenities.

This one, however, is loaded with them. It has a fully fitted backhead that includes the throttle, a pressure gauge, and a water glass. The pressure gauge faces out the right front window. It can be easily repositioned if desired to face more prototypically into the cab.

Water is added to the boiler through a hole concealed beneath a removable cap atop the dummy saddle tank. Its filler plug communicates directly with the boiler. There’s no way to refill the boiler while the engine is under pressure. When water runs low, the fire must be dropped and residual pressure run off before the boiler can be refilled.

Access to the cab is via Accucraft’s usual hinged roof panel. This engine has an open back sheet, too, making throttle access easy while the engine is running.

Sabrina is a gas-fired locomotive. A large butane tank sits on the left side of the foot-plate, next to the boiler. A Ronson-type filler valve at the top of the tank is easily accessible when the cab roof is off. A standard needle valve controls the gas to the burner. The burner is a poker type that lives inside the boiler flue. A sliding sleeve over the intake holes at the back of the burner can be used to adjust the oxygen to the fire. The fire can be lit at the stack or through the open smokebox door. The latter is held securely closed by small magnets – a nice feature.

Steam passes to the cylinders through a stainless-steel superheater pipe that travels through the boiler flue. This gives the steam an added thermic boost.

The proximity of the gas tank to the boiler is a little problematic. As the boiler warms up, so does the gas tank, increasing the pressure of the gas inside. While this is not dangerous, it does affect the performance of the fire, requiring the driver to periodically adjust down the gas pressure. You need to stay on your toes when running this engine.

There are two large, double-acting D-valve cylinders. The footplate has been cut away over the cylinders, providing access to the valve covers, should valves need adjusting. Valves are controlled by return cranks on the crankpins of the rear drivers. These are connected via ec-centric rods to expansion links, with radius rods attached to the valve stems. Additional dummy valve-gear parts simulate Walschaerts valve gear. The engine is reversed by a lever in the cab.

Wheels on the engine are regaugeable between gauge 0 and 1. This is done by loosen-ing set screws on the hubs of each wheel, then moving the wheels to the desired positions. There are detents in the axles to help ensure accurate gauging. Our review sample arrived gauged for gauge 1. In measuring the back-to-back spacing, I found it to be spot on the stand-ard 1.575 inches. 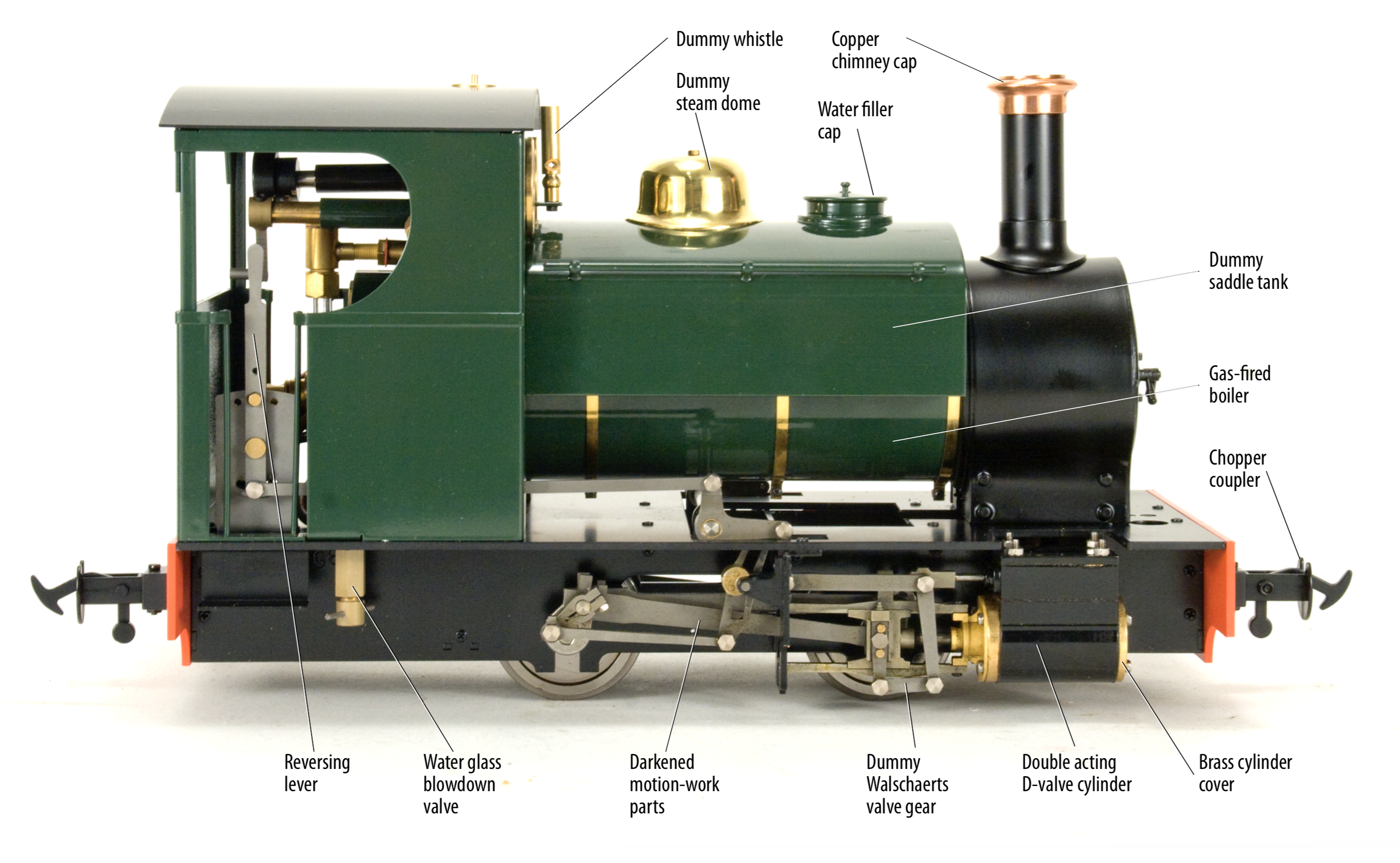 A side view of Accucraft’s Sabrina locomotive with callouts of features.
Garden Railways file photo
A displacement lubricator resides under the footplate at the front of the engine. Access to the filler cap is through a hole in the footplate. I found the cap a little difficult to remove, especially when the engine was hot and oily. A pair of tweezers would help here. You’ll need a syringe (included) to suck out the lubricator and refill it with steam oil.

I prepared the engine for running by first oiling the external moving parts with lightweight machine oil. Then I filled the displacement lubricator under the smokebox with steam-cylinder oil. After that, I filled the boiler up to about three-quarters of the glass with distilled water. Finally, I filled the gas tank with butane.

I lit the fire at the smokebox door. The fire instantly flashed back over the burner and burned steadily. In around nine minutes the pressure was up to around 35 pounds. I turned down the gas a little and opened the throttle. After an initial lurch and some hesitation while the cylinders warmed up and cleared themselves of condensate, the engine moved smoothly off.

Speed control was good and slow-speed operation was excellent in both directions. The chuff is clearly audible over the sound of the burner. I had to turn down both the gas and the throttle a couple of times during the run, as the proximity of the gas tank to the boiler caused it to warm somewhat, increasing the gas pressure and, as a result, the fire.

Water reached the bottom of the glass around 20 minutes after the run began. I decided to let the engine go until either the gas or the water ran out, keeping a close eye on it the whole time. The gas ran out at around 25 minutes and the engine slowed to a stop after running off its residual steam pressure.

The run was impressive for a new engine. Overall, this is a fine locomotive, both for the novice and for those who want a good, reliable, and attractive engine to complement their roster. – Marc Horovitz, Founding Editor