Have fun and enjoy the hobby, but be prepared for what Mother Nature can throw your way 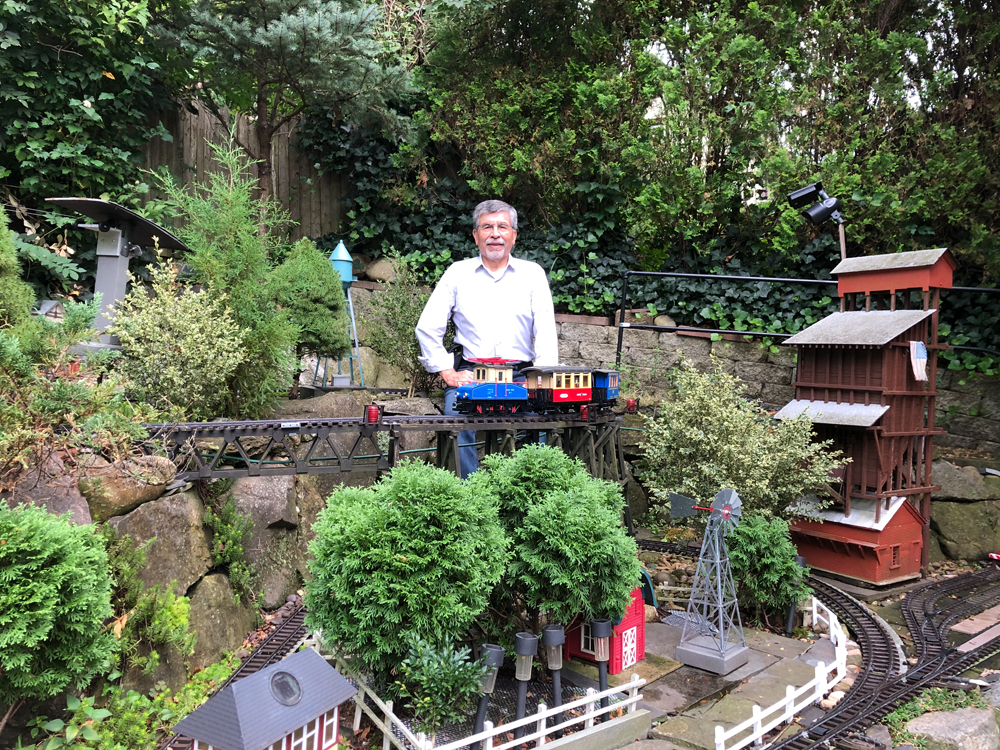 My earlier memories of model trains go back to first grade. On my way to school, we would pass by the front window of a store that would set up a layout during Christmas time. Later I learned that it was an HO train set, but at that time all I knew was that I had to stop by that window on the way to and from school to see the train go around the loop of track.

For one reason or another I never got a train set as a child, but as soon as I began working and had my own money I went to America’s Hobby Center (in New York) to buy an HO train set. Thus began a long history of buying an engine here, a couple of cars there, some track in one visit to the hobby store, some switches during the following visit.

For many years I had been collecting HO engines and cars until one day I happened to visit a craft store. It was not a train store, but on one of the shelves behind the cashier, there was this red LGB diesel engine and a couple of passenger cars. I don’t remember too many details about the pieces, just that they were huge and beautiful.

Once I was bitten by the LGB bug there was no going back to HO. Soon after my encounter with G scale, I went to Trainworld in Brooklyn and purchased a Mogul in the maroon Pennsylvania livery, a couple of passenger cars, and a caboose to make a train. Although I continued to work on some of the HO trains, by then my heart focused on large scale.

As I began to build my garden railway, I discovered that building the structures like the trestle, the bridge (see more in the February 2017 issue of Garden Railways,), the coaling tower, a blue cottage, a pergola (Spring 2019), two tunnel portals, the signal tower, the water tower, fencing (August 2016 issue), etc., was what I enjoyed the most.

It gave me a chance to use my wood working skills and tools [See an article about his low-cost cutting tool in the August 2015 issue, Ed.]. This in turn resulted in my writing and publishing in Garden Railways a number of articles about some of the structures I built for the railway, which also turned out to be a favorite aspect of the hobby.

As time went by, the world of electronics made great advances and the “bells and whistles” in model trains became sophisticated and a common feature, especially in large-scale models, which afforded more room for circuit boards and related components. I was not attracted to this area of the hobby because I was afraid that due to my lack of electronics knowledge, I would fry the electronic board of a very expensive piece of equipment. That kept me away from dismantling an engine and working on the electronics.

When we purchased our current home, the first thing I did was to stake out the portion of the yard that would eventually become the G scale railway (notice the term “railway” as opposed to layout).

Space, budget, and time, limitations, kept me from putting together my dreamed garden railway. However, in 2013, after I retired, time became available. By then I had slowly gathered enough track, switches, and rolling stock to allow me to break ground. But more importantly, I had gathered a substantial amount of information, on what works and on what does not work by religiously reading the articles in Garden Railways magazine. So, I would say that completing the railway has been my biggest modeling success.

Although most of the railway is fine, there is a portion of the track that climbs a 3% grade at the end of a curve, which apparently turned out to be too steep since many trains get stuck there spinning their wheels. I’ve done some regrading, which has helped some, but I think I need to rework that entire curve to eliminate that hump.

If I ever have to build another railway, I will pay closer attention to the grade, to make sure it is free of train-stopping “humps.”

For those starting with garden railways, I would say that you need to be prepared to, and be accepting of, what Mother Nature will throw at you. This includes inclement weather (extreme cold/heat, torrential rain, snow and ice), flora impact (leaves, twigs, acorns, seeds, tree zap, etc.), fauna force (bug juice, bird droppings, raccoon droppings, squirrel damage, other vermin), and depending on your geographical location, I’m sure you could add more issues that the outdoor world has to offer.

Nonetheless, regardless of the kind of model trains we work with, and regardless of the challenges we face, at the end of the day, we have to remember that we are having fun. We are creating our own miniature world. We are our own railroad barons. We run our own railway empires. Of course, that is until we have to drop everything we are doing on the railway because the boss says, “OK, time for dinner! Come to the table!”