No matter if you’re running trains in a circle or re-creating a historical scene, the hobby is fun! 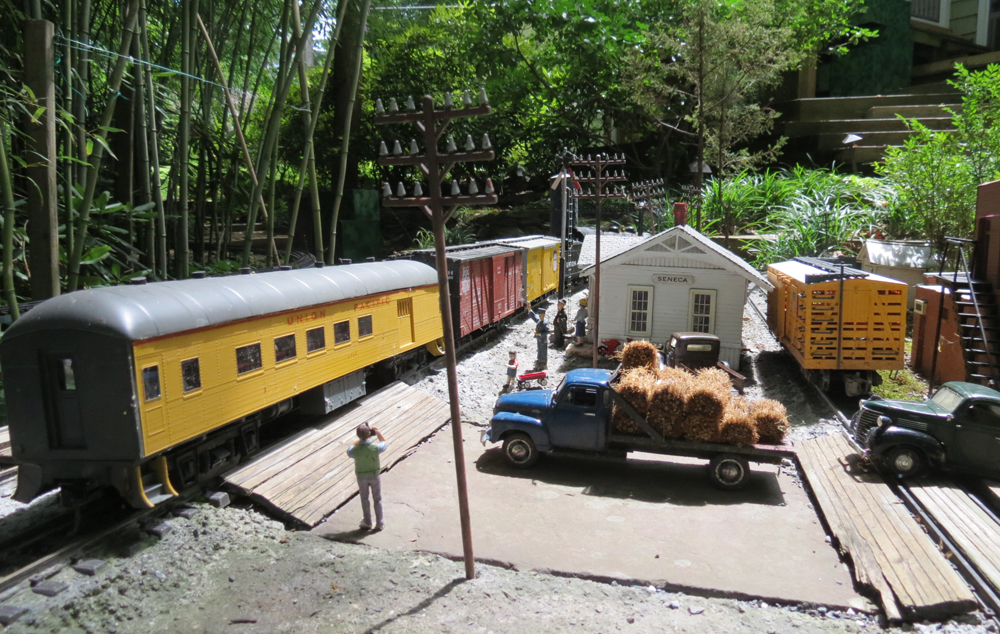 My love of trains started when I was six years old, watching steam engines on a branch line of the Union Pacific in the late 40’s. I recall being swept away with the sounds and power of the Consolidation (2-8-0) locomotives that stopped in my Dad’s hometown. I enjoyed getting dangerously close to a standing engine to hear the “thunk and clank” sounds and feel the heat of the boiler. I was little and they were so big.

When I retired and my kids were off to college, my wife surprised me with Bachman GP Diesel (I think) and enough track sections to go around a small tree. I admit, in its box, it had beautiful silver and red Santa Fe warbonnet colors but I had to tell her, it was the wrong paint job. (I was a Union Pacific fan.) It was also the wrong era.  he was disappointed that she didn’t get it perfect.

But a year or two after, I had replaced that first locomotive and was building a roster of Tuscan orange U.P. equipment for a growing outdoor layout. No circle around a tree, I was building the entire “Kansas Division of the Union Pacific” or so I thought.  In the 50s, my favorite railroad train win line was a grass-between-the-rails connecting branch headed up to the mainline in Nebraska. (Today, it’s 25 daily mile-long empty coal trains headed back to Wyoming. No more grass.)

My favorite part of the hobby is recreating the entire atmosphere that produced that railroad magic in me.  I was a city boy on vacation in rural Kansas visiting my grandma and everything about the little town and the trains was exotic and wonderful.  I have enjoyed recreating the town on my layout, sometimes following old photos, even revisiting the town a few times.  I also learned a lot of my family history.  I especially like my memories of waiting in the creaky old depot for the westbound motor from St. Joe, one of three trains a day that passed through Seneca in those years.

My least favorite part of the hobby is the steadily increasing technology available.  I converted from track power to battery power after cold weather interrupted track connections in many places, and being a techno-dinosaur, I was never comfortable with the high-tech remote controller or the charging devices. My wife and I would frequently huddle over instruction books.

My biggest mistake was not realizing how damaging trees around my yard could be.  Limbs and branches fell during storms but miraculously, only one of my buildings got smashed. A model farmhouse actually exploded on impact by a twenty-foot Tulip Poplar branch. I located all the pieces and put it back together. I was committed to the location of my layout but whenever the summer sky darkened, I got nervous. I finally built rigid foam boxes that I could drop over the buildings quickly. The trains would be run into my shed for protection.

I experimented with plant material for the layout but found that ordinary moss from neighbor’s back yards worked nicely. Of course, I asked for permission before lifting it with a shovel. They must have thought I was nuts. It’s a very tolerant plant and settles in nicely but mice sometimes harvest it for nests, leaving empty patches.

Some people like to “play with trains.” I guess my interest was always different. I was recreating a memory and it had to be as authentic as possible. I got into the architecture and history of the town and researched what U.P. locomotives and rolling stock were accurate to the era. I rarely “played” with my trains, I took photos and was happy when people couldn’t tell that it was a model. My advice to newcomers is to decide early whether you are going for authenticity or whether you just want to run trains around a tree. Both can be fun.

I started another layout a few years ago based on the historic Kansas Central narrow-gauge line that ran just 20 miles south of Seneca in the 1870s. Being a history and authenticity nut, my two layouts could never merge. My old-style line runs through a bamboo grove and over a rocky waterfall, not very Kansas-like, but it’s always a topic of conversation for visitors, especially for lovers of the Wild West.