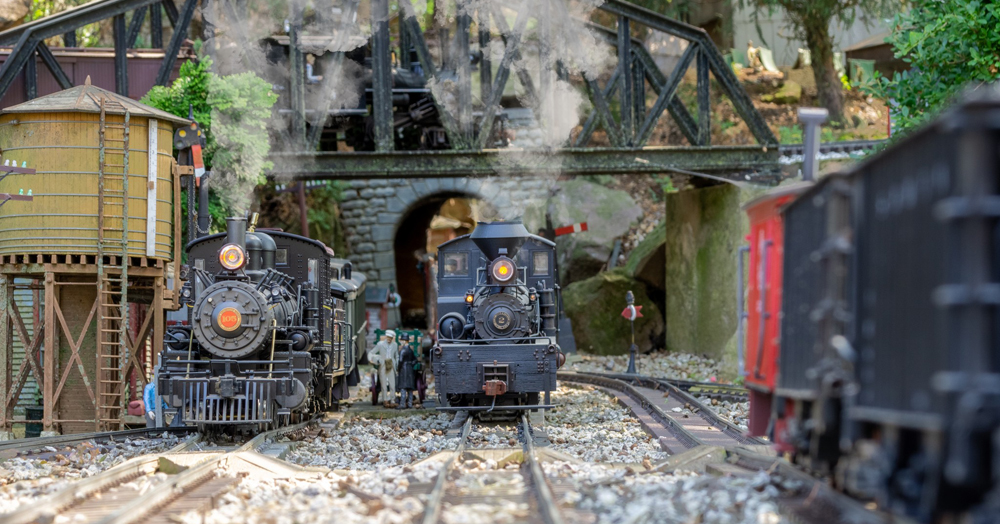 In a paragraph, how did you get started in the hobby?

I started my garden railway 30 years ago after attending a National Garden Railway Convention in Washington D.C. My father lived in Chicago at the time and had a small LGB garden railway, so I was somewhat familiar with it, but I had been heavily into HO model railroading for years.

After attending the convention and seeing the layouts on tour (including the late Jim Strong’s Woodland Railway,) I was hooked and decided I wanted to build a pond and install a loop of track in my yard. Over time, this loop expanded to a second loop and then back yard fences started getting moved to add more real estate for garden railway and the main line expanded.

As time went on my interest in large scale surpassed my interest in HO model trains and after my son was born, I accepted that I did not have time for both, so I tore up my HO layout and dedicated all my model railroading time to the garden railway. When Bachmann came out with a 2-truck large scale Shay I got hooked on logging railways and focused my modeling on the Western Maryland’s coal hauling and WV logging operations.

My first large scale engine was a battery powered “Big Hauler” that my wife got me for Christmas to put under the tree. These were pretty popular engines 30 years ago and many folks got introduced to large scale with a Big Hauler set. The choices for American prototypes were limited at that time, and these were an affordable option to get started in large scale. I eventually ended up with a “fleet” of three of these engines, and I did various upgrades like adding BEC radio gear and sound cards and these were my railway’s only engines for a number of years.

I like a lot of aspects of garden railroading, but my favorite would have to be building rolling stock. I enjoy building and modifying cars and engines. Of late I have gotten into picking up “parts engines” and rebuilding them with 3-D printed modifications to make them better resemble prototype Western Maryland equipment.  I have also gotten into 3D printing complete cars and logging equipment.

The “yard maintenance” part of the hobby is probably my least favorite. It does take a lot of work to keep all the plants trimmed. While the large trees in my back yard do offer shade over the layout which helps keeps things a bit cooler in the summer, the constant “rain” of leaves and twigs requires me to do a cleanup prior to operating trains if I have not run them for a couple of days.

Since I started out with a battery powered Big Hauler, I’ve never had power to my track, and I have never regretted that choice. As I added equipment to the railway, I converted my engines to battery/RC using the then new Aristo TE or RCS systems.  A few years ago I updated and converted my fleet to Railpro.  As my railway evolved my decision to try and represent a specific era and location helped make my line more realistic.  As my skills improved, I was able to make more realistic models and most recently I have gotten into 3D printing which has really expanded what I have been able to create.

Over the years I tried a lot of things before coming up with the best ways to make things durable enough to hold up to the outside.  Some of my early scratchbuilt buildings were made with dollhouse siding, which I quickly learned does not hold up to the elements no matter how many coats of paint you put on it.  And now, as I get older, I wish I had built my layout on elevated beds so I would not have to bend over so much. But when I started my railway that was not really something people did.

Meet Randy Mower: What advice would you give to a new hobbyist?

While this is a great hobby to get into, it can also be a bit pricey. I suggest starting small and gradually expand over time. One of the great things about garden railroading is it is easy to tear up and make changes when you are building on dirt. Give yourself space to expand and try to use the largest radius curves and turnouts you can. I also recommend that unless you want the headache of cleaning track and fixing dead spots to go with battery power/RC. Modern batteries can power your equipment for hours of run time, and a battery trailer car can add even more. Modern RC control systems like Railpro include sound and offer all sorts of programming options. Also visit swap meets or check out online swap groups for deals on used equipment and track.